Thymectomy traditionally have been performed by sternotomy, but because of the invasiveness of the traditional approach leading to long time of recovery, minimal invasive approaches have gained progressively interest to the point of being recognized as the surgery of choice for the management of mediastinal tumors, including thymoma (1-3).

The first minimal invasive thymectomy, was introduced in 1992, and over the next two decades, many different approaches have been described: video-assisted thoracoscopic surgery (VATS) multiport thymectomy, transcervical thymectomy, subxiphoid approach for extended thymectomy, robotic thymectomy and uniportal VATS thymectomy. However, the oncological feasibility and limitations of the minimally invasive thymectomy remain controversial (1-6).

VATS thymectomy is a procedure which usually requires carbon dioxide (CO2) gas in order to gain enough visualization. Single-port VATS has been described by using a flexible port (SILS port®, Covidien, MA©) designed to retain gas. We have hypothesized that VATS thymectomy is feasible by a single incision without using CO2, with similar outcome to conventional VATS.

This article presents our initial experience with “CO2-less VATS single port thymectomy” during a period of 3 years. In this novel approach, complete thymectomy is performed by a 3-cm thoracic single incision, without use CO2 gas, port device or chest retractor. The factors associated with the surgical and clinical outcomes were retrospectively reviewed to evaluate feasibility and limitations of CO2-less VATS single port thymectomy in comparison with open approach.

We retrospectively reviewed files of 84 patients undergoing thymectomy for treatment of different thymic disorders specially thymoma with a curative intent between January 2005 and January 2016 in the minimally thoracic invasive unit of Asturias University Central Hospital. The institutional ethical review board of the Asturias University Central Hospital provided the approval for this study, and all patients provided written informed consent before operation.

Surgical time, postoperative hospital stay, intraoperative outcomes and postoperative complications were recorded. Patients diagnosed of thymoma were followed by chest CT at 6 and 12 months after surgery and once yearly thereafter. The diagnoses of all resected thymomas, surgical margins and Masaoka stages (7) were confirmed by histopathological examination. Tumors were classified histologically according to the World Health Organization (WHO) classification into types A, AB, B1, B2, B3 and thymic carcinoma (8). In case of thymectomy for myasthenia gravis (MG) patients were followed by clinical interview every 6 months. Criteria for the assessment of the postoperative status during the follow-up were referred to definitions given in the MG post-intervention status, including: complete stable remission (CSR), pharmacologic remission, minimal manifestations, improved, unchanged and worse exacerbation, and died of MG (9).

All the data are reported as median or frequencies, with associated interquartile ranges (IQR), 95% confidence intervals (CI), and P values calculated. Categorical data, both nominal and ordinal, were compared between groups using Fisher’s χ2 (exact) test. A probability value of less than 0.05 was considered to be statistically significant. SPSS, version 20.0 (IBM Corp.) was used for the statistical analysis.

A complete extended thymectomy (including superior and inferior poles) and surrounding fat tissues were resected in both open and VATS procedures.

A double-lumen tube for selective-lung ventilation with continuous aspiration was used in order to gain full collapse of the no dependent lung. Lesser tidal volume for optimal ventilation was applied to dependent lung. Patients were placed in lateral decubitus position. A 3-cm incision was placed on the left hemithorax in the fourth intercostal space between the anterior and middle axillary line (Figure 1). For a panoramic view, a 5-mm/30° thoracoscope was used; which was introduced through the anterior part of the incision. However, the placement of thoracoscope was modified at times according to the requirements of some particular step during procedure. For avoid crowding of instruments, specific uniportal VATS instruments (Scanlan Uniportal/Single-Incision®, Scanlan International US©) were used. Phrenic nerve is identified. Mediastinal pleura are incised just anterior to the phrenic nerve in its upper part. This incision is followed all along the nerve pathway to the point it is not in contact with mediastinal fat. Dissection of cranial part is carried out to identify left brachiocephalic vein which is dissected using an ultrasonically activated device (Harmonic®, Ethicon US©) for vascular branches. Once brachiocephalic vein is dissected, a blunt separation is used for separated the thymus gland to the sternum as far contralateral pleura is visualized. The thymus was then carefully dissected cranially over the left brachiocephalic vein by traction of thymus pole. All thymic lobes and perithymic fatty tissues were mobilized en bloc with the tumor, allowing exposure of the underlying pericardium and the aorta. After the left side of the thymus was dissected from the superior pole to the inferior pole, the dissection was continued to the right thymic lobe. Thymus is mobilized free from the pericardium and ascending aorta. The specimen was removed in a plastic retrieval bag. An 8-French drain catheter is left in place through the surgical incision. 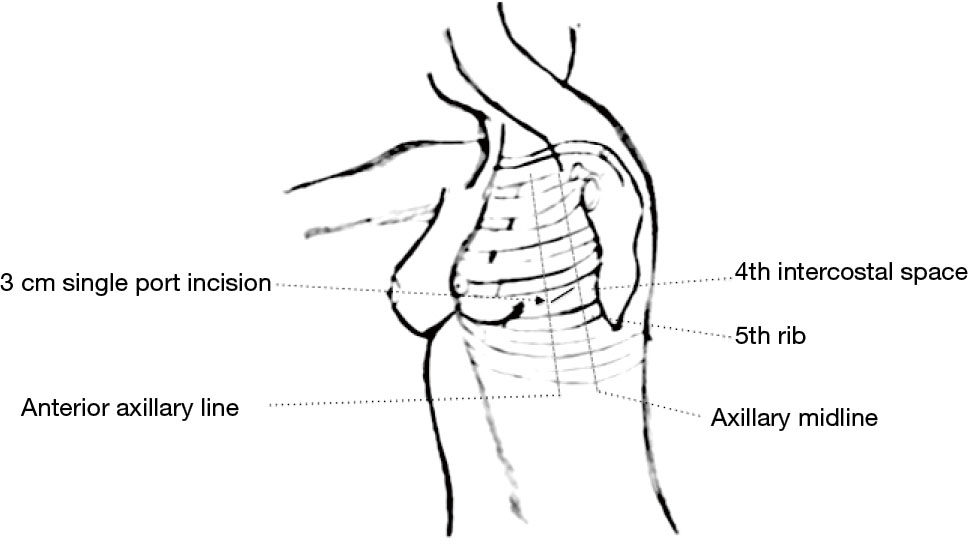 We performed 84 consecutive surgical procedures for different thymic disorders, most common was thymoma with 35 patients (41.7%) followed by thymic cyst with 24 patients (28.5%), thymic hyperplasia with 13 patients (15.5%), thymic remnant with 11 patients (13.1%) and one ectopic parathyroid gland (1.2%). Of them, 18 (21.42%) patients underwent CO2-less VATS single-port thymectomy, while 66 (78.58%) underwent thymectomy through an open sternotomy. Patient characteristics were not significantly different between approaches (Table 1).

Of the 18 cases performed by CO2-less VATS single port thymectomy, there were no intraoperative complications that prevented completion of the resection by VATS. No conversions or incision lengthening were required in any case. Mean surgical time was 101.3±36.6 min in VATS group and 118.11±59.5 in open resection group (P=0.126). There was an important hemorrhage in one case in the open group. The mean of tumor size was 2.81±2.3 cm in VATS groups and 3.62±3.2 cm in open resection group (P=0.327).

The most relevant data about intraoperative and postoperative findings are collected in Table 2.

Most common complication in the open approach group was wound infection (n=2, 3%). There was one death (1.19%) in this group because a very old female with 81 years old, who underwent an open thymectomy for treatment of uncontrolled MG suffering a significant blood loss during surgery. Patient died 10 days post-operatively because a neurological disorder. No complications or deaths in the group of patients undergoing VATS were found.

Of the 35 patients who underwent thymectomy for thymoma 18 patients were stage I (51.42%), 9 patients stage IIa (25.71%), 3 patients stage IIb (8.5%), 2 patients stage III (5.7%) and 3 patients stage IVa (8.5%). The mean follow-up time was 16.5±14.6 min in VATS groups and 61.6±31 in open resection group. In the comparative analysis, for the follow-up period (12 months) we found that both the 5-year overall and 5-year recurrence-free survival rates were 100% for VATS group but 100% and 94%, respectively for open surgery. Histopathological analysis shows complete and extended thymectomy achieved in all patients. Unexpected R1 status was found in one patient in the open group. This patient was sent to the medical oncology service to complete treatment with adjuvant radiotherapy. 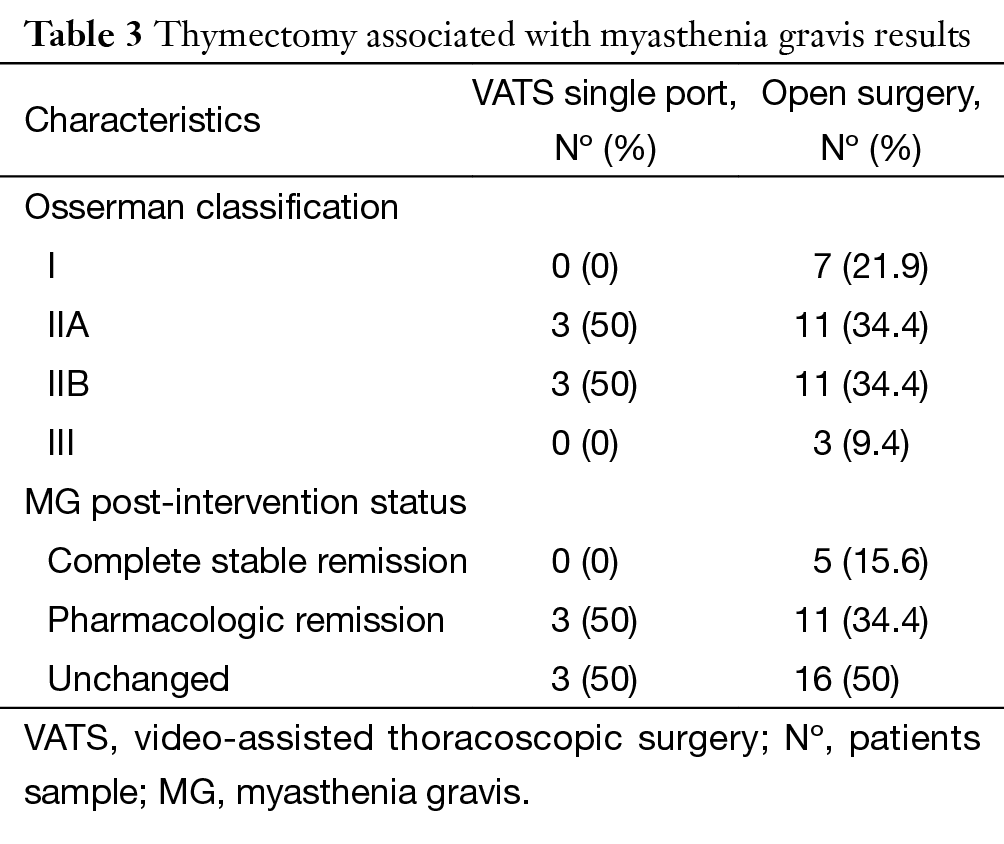 In a relatively short period of time, minimally invasive approach has been gained interest for many diagnostic and therapeutic mediastinal procedures previously performed by traditional sternotomy. Nowadays minimally invasive surgery is considered the eligible approach for treatment of early-stage of thymoma and other indications for thymectomy (1,2). In this sense, different approaches have been proposed: multiport VATS thymectomy, transcervical thymectomy, subxiphoid approach, and uniportal VATS; all of them with similar results. VATS thymectomy for thymic disorders has showed comparative results with conventional open thymectomy (12). More recently, thoracoscopic thymectomy with Da Vinci robotic system has been developed (13) but its advantages remains controversial.

As far our knowledge, there are very few series reporting surgical outcomes of single-port thymectomy. In all cases reviewed, CO2 was used requiring a special port (SILS port®, Covidien, MA©) to retain gas (14). However, single-port VATS thymectomy without the use of CO2 and hence any special port device is possible but up till now has not been described.

Intrathoracic CO2 insufflation helps the surgeons by increasing the surgical field during thoracoscopy, but numerous studies showed that positive pressure of capnothorax had negative impact on patients, forcing to a very strict gas flow control and extensive haemodynamic motorization, to avoid these adverse effects (15). Most common CO2 insufflation adverse effect is hypercapnia with increased cardiac output, central venous oxygen (O2), and arterial O2 tension (16); hypercapnia may progress to hypercapnic acidosis, with increased of cerebral blood flow and local blood cell damage (17). Byhahn C, at all found adverse effects of hypercapnia induced by CO2 insufflation are worse in patients with lower forced expiratory volume in 1 second (FEV1)/forced vital capacity (FVC), increased age and smoking history (18). Based on these arguments we consider CO2-less single port, described in our study, may be a beneficial progress in minimal invasive thymectomy.

In addition, given that single-port technique is performed introducing all instruments thru the same incision, instruments need to move as free as possible along the port. In this respect it is striking that CO2-less VATS don’t need any port device enabling more space to move instruments and camera more freely making the procedure easier and cheaper.

Several authors (19,20) have reported that complete thymus resection is always the treatment of choice for majority of thymic disorders. However, no definitive guidelines have been established regarding the optimal surgical procedure or resection extent for majority of thymic disorders. In addition, Sakamaki et al. (21) reported that unnecessary wide resection of the thymus for smaller lesions, may increase the potential risk of surgical complications in some cases.

In the basis of our 4-year experience in uniportal VATS for lung major resection, and our experience in CO2-less 3 ports VATS thymectomy, we began to perform complete and extended thymectomy by a single incision without gas in the aim to deploy the most minimal invasive technique.

For patients with diagnostic of thymoma in this study, both the 5-year overall and 5-year recurrence-free survival rates were 100% during the follow-up period for VATS groups and 100% and 94%, respectively for open surgery showing any advantage for sternotomy. This results are concordant with others authors. A recent report of surgical treatment for thymoma demonstrated that the overall 5-year survival rate of patients with stages II thymomas and I ranged from 89% to 100% and 71% to 95%, respectively (22).

In our study, rates of complete remission for MG thymectomy were 13.5% in the first year of follow-up and exclusive for open surgery group; this is comparable to other large studies showing similar rates of complete remission after complete thymectomy (23). Mantegazza et al. in their large multicentre follow-up reported a CSR of 11% at the 5-year follow-up. They concluded that remission rate (RR), raised in: patients operated shortly after diagnosis, generalized mild-to-moderate MG, and involuted thymus (24). Venuta et al. in their 27-year experience review reported a 25% CSR at the 10-year follow-up (23).

The mid-term surgical outcomes in our series demonstrated a very significant shorter hospital stay (median one day), and intensive care stay (median 10 hours) for VATS group. In the same way, complications in this series were exclusive for open surgery group evidencing the safety and feasibility of this novel approach.

Our study has several limitations. This study is a non-randomized retrospective study and in this sense with potential selection bias. In addition, as consequence of the novelty of this technique, the number of patients were different for two groups and are not sufficiently large to obtain definitive conclusions. Furthermore, because thymic disorders are usually indolent disease, longer follow-up is needed to determine the outcomes of CO2-less single-port VATS. Until there are other similar experiences, our results should be interpreted with caution.

Ethical Statement: The institutional ethical review board of the Asturias University Central Hospital provided the approval for this study. Written informed consent was obtained from the patient for publication. A copy of the written consent is available for review by the Editor-in-Chief of this journal.