How to identify the intersegmental plane?—a narrative review

Lobectomy is currently the gold standard treatment of non-small cell lung cancer (NSCLC) (1). However, segmentectomy is a parenchyma-sparing procedure that is considered as effective as lobectomy in the treatment for early-stage NSCLC (stage IA1 and IA2) (2). In parallel, the video-assisted thoracic surgery (VATS) technique is associated with less postoperative pain and a better quality of life as compared to an open approach for pulmonary anatomical resection (3). Consequently, segmentectomy by VATS is being used increasingly. However, the difficulty in identifying the intersegmental plane (ISP) may remain a technical barrier during the procedure. A 3-dimensional pre-operative planning provides a better understanding of the anatomy (4,5). Nevertheless, the surgeon needs intraoperative assistance to identify the ISP correctly. Furthermore, according to the American College of Chest Physicians, safety margins of 2 cm for tumors larger than 2 cm or a margin that is at least as large as the tumour diameter for smaller lesions are required to avoid local recurrence (6,7). Therefore, an adequate identification of the ISP during segmentectomy is of special concern for the oncological outcome and survival. Several technical procedures have been proposed to identify the ISP during VATS segmentectomy.

The aim of this narrative review is to describe the present state of methods to identify the ISP. We present the following article in accordance with the Narrative Review reporting checklist (available at https://jovs.amegroups.com/article/view/10.21037/jovs-21-40/rc).

This narrative review was based on searches in MEDLINE, PubMed and Google Scholar database. Keywords used for the research included “segmentectomy by VATS”, “thoracoscopic segmentectomy”, “ISP” and “intersegmental demarcation”. We searched for published articles between 2000 and 2021. The articles were reviewed by B.B and W.K. Duplicate articles were removed. Studies with content unrelated to the topic, videos, animal studies, articles not written in English and studies prior 2000 were excluded from this narrative review.

Identification of the ISP is a key step in segmentectomy by VATS. Many new techniques are constantly emerging that are driven by new advances in technology. Currently, no demarcation technique of the ISP has really succeeded in establishing itself universally and each technique has its own advantages and disadvantages. Considering the anatomy of a pulmonary segment, the pulmonary artery and bronchus generally follow a similar path. The vein is often located in the ISP. Lymphatic drainage follows the bronchi and pulmonary veins. Classically, the ISP is determined through the segmental artery and bronchus and its visualization is obtained at the visceral pleura. A recent clinical trial showed that the dissection of the ISP with stapling devices improved the postoperative outcome as compared to dissection with electrocautery (8). The intra-parenchymatous ISP is also often not determined during segmentectomy by VATS.

Identification of the ISP

The inflation-deflation method is the historically manoeuver used to establish the ISP in open procedure (9,10). This technique consists of occluding the target segmental bronchus and then to inflate the lung. This technique creates a demarcation line between the deflation of the segment to be resected and the inflation of the remaining lung. However, the determination of the border can be difficult due to collateral ventilation through the pores of Kohn and the canals of Lambert into an adjacent segment. In VATS, this method limits the thoracic working space, especially in emphysematous lungs. Furthermore, this method can be time consuming in emphysematous patients due to entrapped air into the alveoli and the difficulty to empty their lung after selective exclusion.

Selective inflation of the target segment

Contrary to the conventional inflation-deflation method, the target segment is here directly inflated. After isolation of the targeted segmental bronchus by VATS, a high-frequency jet ventilation (40 Hz, working pressure of 2 kg/cm2) is injected in the target segment by bronchoscopy (15). The selected bronchus is then ligated and inflated while the preserved segments are deflated. This method affects little on the visual field during VATS but requires skilled staff. Nevertheless, the issue of collateral ventilation can remain. Another proposed method for a selective inflation is the puncture of the bronchus with a needle by the surgeon (16). However, we do not recommend this method because of the risk of massive air embolism (17).

In 2012, Sekine et al. reported the use of an infrared thoracoscopy after preoperative or intraoperative transbronchial injection of indocyanine green (ICG) (18). ICG is a green dye visible as fluorescence by near-infrared light. The target segment appears as a bright area. With a bronchoscope, 20 to 30 mL of 5-fold saline-diluted ICG is injected into each target segmental bronchus. Then, 200 to 300 mL of air was injected into the bronchus to distribute ICG into peripheral regions. A continuous positive airway pressure ventilation was maintained until the start of the operation. In a recent study, determination of the optimal settings was developed (19). They established precisely that the optimal volume of diluted ICG for insufflation was 8.91% of the calculated targeted pulmonary segment volume. This technique no need for lung inflation. However, successful identification of the ISP depends on skilled staff, and airway secretions may interfere with staining. Furthermore, an inadequate demarcation of the ISP can occur if some of the insufflated ICG leaks backward. In order to overcome this issue, a Fogarty arterial embolectomy catheter may be used for sealing the bronchial lumen (20).

To improve the localization of the nodule during VATS, an electromagnetic navigation bronchoscope (ENB) can be used. This repeated procedure with multi-spot dye-marking to select the target segment is called a virtual-assisted lung mapping (VAL-MAP) (21). This method was originally developed as an alternative to CT-guided marking. This technique has some advantages for VATS segmentectomy: the resection margins can be marked and the resection lines can be flexibly designed in another adjacent segment. In addition to the VAL-MAP, bronchoscopic placement of platinum microcoils can be placed to indicate appropriate resection margins (22).

In 2009, Misaki et al. first reported injecting ICG intravenously intraoperatively to identify the ISP after resection of the segmental artery (23). Since then, this method has been widely studied (24-31). This method is the one we use. Contrary to the intrabronchial injection method, the target segment is dark while the remaining lung appears bright (Figure 1). After division of the target artery, ICG is injected into the central or peripheral vein with an initial dose of bolus of 0.15 mg/kg. The ISP in then marked with electrocautery. Intravenous ICG method has major advantages: it’s very quick, repeatable multiple times, there is no need for a skilled staff, and it permits to verify if the target segment is a reasonable consideration for resection by clamping the artery. In a previous study, we considered that intravenous ICG changed the arterial dissection in 10% of patients, avoiding inappropriate resection (31). Furthermore, Mehta et al. showed that the use of ICG during segmentectomy could increase the oncological margin length as compared to the best judgement of the surgeon (32). However, the ISP may be misleading or confusing due to emphysema or collateral circulation. 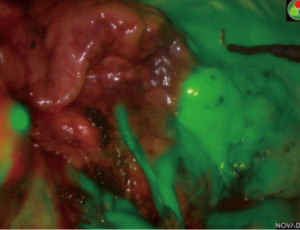 Figure 1 Identification of the ISP after intravenous injection of the ICG (the target segment is dark while the remaining lung appears bright). ISP, intersegmental plane; ICG, indocyanine green.

Sun et al. compared the intravenous ICG method with the conventional inflation-deflation method. Both methods were used in 19 patients to delineate the ISP (33). They found that intravenous ICG method was totally concordant with the modified inflation-deflation method. Finally, the benefit of a hybrid technique of VAL-MAP and systemic injection was recently demonstrated for a nodule deeply located between the left upper division segment and the left lingular segment (34).

Hybrid procedures with mixing techniques have generated a plethora of articles on the feasibility of each procedure. All techniques seem to be associated with a high success rate but only one study compared different methods in the same patients (33). Finally, the last method not published but practiced is the identification of the ISP by the eyes of the surgeons. Another promising system to identify ISP during VATS is the hyperspectral imaging that would permit to display tissue oxygen saturation and other parameters without dye. Frankly, none of these methods has shown its oncological superiority over another. Margin resection in segmentectomy is a matter of concern to avoid local recurrence. Segmentectomy can only be indicated and performed if the resection can be safe and oncological. The best technique to identify the ISP is ultimately the one that can avoid recurrence.

Provenance and Peer Review: This article was commissioned by the editorial office, Journal of Visualized Surgery for the series “VATS Segmentectomy”. The article has undergone external peer review.

Conflicts of Interest: All authors have completed the ICMJE uniform disclosure form (available at https://jovs.amegroups.com/article/view/10.21037/jovs-21-40/coif). The series “VATS Segmentectomy” was commissioned by the editorial office without any funding or sponsorship. MG served as the unpaid Guest Editor of the series. The authors have no other conflicts of interest to declare.