The literature reports a similar risk of vascular injury with the robotic approach, with rates ranging from 0.5% to 2.6% (1,4-9). In this context, vascular injury leads to a significant increase in in-hospital mortality, as reported recently by Cao et al. (10).

In this paper, we focus on strategies developed by our team to prevent and manage major intraoperative bleeding during robotic surgery. We present the following article in accordance with the Narrative Review reporting checklist (available at http://dx.doi.org/10.21037/jovs-20-147). 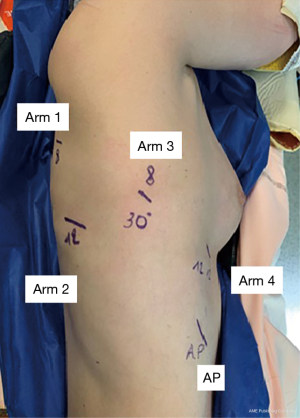 The surgical assistant was positioned in front of the patient with a long suction tip.

The DaVinci Xi Surgical system (Intuitive surgical SAS, Montrouge, France) is placed perpendicular to the table. The patient position was that of conventional surgery, with the head placed close to the anesthesia station.

PAI is a rare but serious occurrence during minimally invasive thoracic surgery. In a 2019 publication that evaluated the occurrence of PAI during robotic lung resection, the incidence was found to be around 1.5% in high volume centers (10). 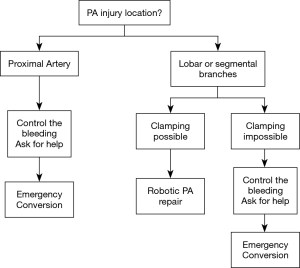 The location of the PAI is the key to management, raising the question of whether is it possible to control the bleeding using a robotic approach. In other words: can the bleeding be controlled and can the upstream pulmonary artery (PA) be clamped? (Figure 2). In our experience, repairing the injury robotically is complex and is only feasible for surgeons with extensive experience in minimally invasive thoracic surgery, especially using the robotic approach and ideally in expert and high-volume centers that also possess highly-trained support teams (Table 1).

The first step in both situations is to immediately control the bleeding with a sponge stick. 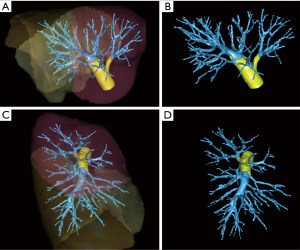 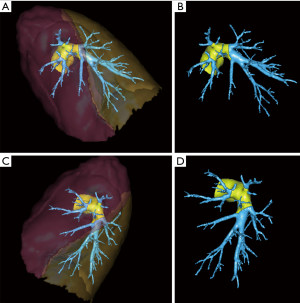 There are a number of mandatory steps for conversion: first, inform the whole staff including the anesthesiologist of the major bleeding so that blood compensation can be started; secondly, before opening the chest, the PAI has to be controlled with a sponge stick using the most posterior arm so that there is enough space to perform antero-lateral thoracotomy by removing the other arms or the most anterior arm, or by removing the most anterior arms in order to have enough space to perform postero-lateral thoracotomy; thirdly, the camera should be inserted into the assistant port and maintained throughout the conversion in order to ensure that the bleeding is controlled. In our experience, the main surgeon stays sterile with is gown at the console after the docking of the robot, therefore is case of emergency conversion, the main surgeon just needs to change is gown and gloves. Moreover, in our team, a second surgeon is called to assist with the conversion—it is important to have the assistance of an experienced surgeon in case it is difficult to control the main PA during bleeding.

Moreover, the injury of the main PA and the proximal part of the first branches of the PA (yellow part of the PA on Figures 3,4) are difficult to repair with a robotic approach even for a skilled surgeon. Indeed, the main PA has to be clamped in order to allow safe repair of the injuries. Therefore, conversion is required to contain the bleeding. The robotic approach should not be used to repair proximal PA due to the risk of an additional accident, especially the risk of tearing the main PA, which would likely lead to poor patient outcomes.

When injuries occur in the distal part of the PA, especially during middle or lower lobectomies or dissection of the distal branches of the PA for segmentectomies, the bleeding is easier to control, and robotic management is possible (Figures 3,4). In these cases, the PA upstream from the injury can often be clamped with the 4th arm with a smooth forceps, and is then feasible to suture the artery with a robotic approach. In our team, our habits are to use the tip-up forceps (Intuitive surgical SAS, Montrouge, France) because its low strength allows us not to injure the PA, but it is also possible to use bull-dogs to clamp the vessel. This kind of repair should only be conducted in an expert center with a trained team (Videos 2-4). The help of an assistant is critical: in our experience, during major bleeding, the presence of a second skilled surgeon is needed to perform suction and to provide adequate exposure for the technical management of the injury.

Even experienced board-certified thoracic surgeons are subject to major intraoperative incidents (3). In order to minimize the risk of injuries during robotic lung surgery, processes such as simulation, training and preoperative planning using 3-dimensional imaging can be used.

In cases of PA bleeding, life-saving decisions have to be taken within a very short timeframe. Therefore, training for the management of this risky situation before it arises has major benefits for the entire team. Appropriate decision making, communication, and inter-professional skills are vital for positive patient outcomes in both routine and crisis scenarios (11,12). Before the surgery, the surgeon must prepare by reviewing the scenarios in which emergency conversion should be performed after bleeding control and the injury can be repaired using the robotic approach.

Simulation is a good approach for training both for younger surgeons with less experience and for older surgeons training to use a new technique (13). Over the last decade, many simulators have been created for the purpose of training for open thoracic surgery, VATS and RATS (14-16). Different virtual reality simulators have been developed for VATS lobectomy training, providing a realistic approach to the management of lobectomy that is relevant for all different skill levels (17). Virtual reality simulators have also been developed for RATS; these systems have proven that they are able to improve surgeon efficiency and the quality of learning during mitral surgery or lobectomy (18,19).

Finally, preoperative planning using 3-dimensional imaging could be used to identify the anatomical disposition of the vessels before minimally invasive surgery such VATS or RATS, therefore minimizing the risk of major PA bleeding (20).

In order to prevent vascular injury, there are some rules:

Thoracic surgeons who are not experienced in minimally invasive surgery techniques require specific training in order to develop techniques for conversion and specific strategies to manage major bleeding.

The authors would like to thank Suzanne Rankin (Dijon University Hospital) for revising the manuscript.

Provenance and Peer Review: This article was commissioned by the editorial office, Journal of Visualized Surgery for the series “Robotic Assisted Thoracic Surgery: Advanced Procedures in Lung and Mediastinum: From Post-induction TTT (immunotherapy) to Sleeve Resection, Complex Segmentectomies and Extended Thymectomy for Myasthenia Gravis”. The article has undergone external peer review.