I present a case of a symptomatic typical carcinoid originating from the orifice of the middle lobe bronchus. A middle lobe resection was performed in combination with an anastomosis of the lower lobe bronchus to the intermediate bronchus. Due to the anatomical proximity of the segmental bronchial orifices of the lower lobe, this operation might not be feasible oncologically due to insufficient margin of resection. The bronchial anatomy and, furthermore, the spatial relation to the pulmonary artery, makes a middle lobe sleeve resection technically demanding and is another reason why it is rarely executed.

In this report, the technical issues concerning a minimal invasive sleeve middle lobectomy and the potential advantage of using a robotic platform are discussed. The following case is presented in accordance with the CARE reporting checklist (available at http://dx.doi.org/10.21037/jovs-20-50).

A bronchoscopy revealed a smooth mass protruding from the orifice of the middle lobe bronchus, pathology of the biopsy revealed a typical carcinoid.

A somatostatin receptor PET/CT scan (68Ga-DOTATATE) showed a single lesion at the level of the middle lobe bronchus without other local or distant lesions. The patient had a normal spirometry and diffusion capacity. He was counselled and agreed with primary resection of the lesion.

Middle lobe sleeve resections can be performed through different approaches e.g. thoracotomy, multiport VATS or uniportal VATS (8-10). In Video 1, the author demonstrates the feasibility by robotic assisted thoracoscopic surgery (RATS) as it has been described by Durand et al. (11).

The procedure was performed with an Xi® system (Intuitive Surgical®) and 30° 8 mm camera. Bronchoscopic visualization of the tumour is advised both prior to the start of surgery and at the moment of bronchial incision.

After the start of the general anaesthesia and the placement of a double lumen tube, the patient was installed in lateral decubitus. After draping and time-out, an utility incision was made for a 12 mm trocar at the 7th intercostal space at 5cm from the costal margin (Figure 1). CO2 insufflation was started at a pressure of 6 mmHg. Four additional trocars were placed in an ‘Ursa Major’ configuration and the robotic cart was docked. This configuration has a caudal position of the ports of the working arms to the left and right of the camera and allows more degree of freedom for the Intuitive staplers. In case these are not used, a more typical port placement on a single line can be used. In the most posterior port, we used a tip-up fenestrated grasper for lung retraction; in the port to the left of the camera a Prograsp® forceps and to the right a Maryland bipolar forceps, switching to scissors and needle driver when necessary. The ports flanking the camera, were changed to 12 mm ports to use Intuitive staplers. Two handmade rolled gauzes were inserted for lung retraction. The assistant handled a 5 mm suction device to aspirate smoke and blood and removed lymph nodes within finger gloves by the 12 mm utility port. 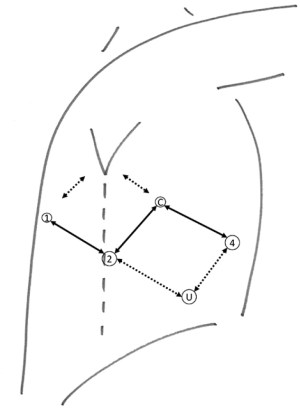 We like to perform the mediastinal lymph node dissection first: transection of the pulmonary ligament, identification of the lower lobe vein, opening of the posterior pleural reflexion, lymphadenectomy of the subcarinal region, dissection of the posterior side of the upper lobe bronchus and intermediate bronchus, visualizing the secondary carina, opening of the anterior pleural reflexion, identification of the superior vein, lymphadenectomy below the azygos vein and of the paratracheal region.

To enhance the exposure, a sling can be pulled around the lower lobe artery. The intermediate bronchus should be freed from the adjacent lower lobe vein and pulmonary artery. Even then, transection of the lower lobe bronchus (basal segments and S6 together) can be difficult. While the rule is to keep the tumour attached to the resected lobe, alternatively and only in small tumours, the bronchus can be transected distally to the tumour to obtain a good vision. Next, the bronchus can be cut longitudinally opposite to the tumour implantation towards centrally. The lower lobe and intermediate bronchus must be cut well away from the tumour while obtaining a direct view on the tumour. In case that the tumour is too big to allow transection the distal part of the middle lobe bronchus first, endobronchial visualization should guide the transection of intermediate bronchus and lower lobe bronchus. At all time, one has to be careful not to cut too deep into the lower lobe segmental bronchi. In the case shown in the video, the first cut in the bronchus is made with a view from anterior on the middle lobe bronchus, while pulling the pulmonary artery posteriorly. The further resection, including obtaining section margins, and further sleeve anastomosis was done from a posterior view while pulling the artery anteriorly. To deal with this specific technicality and exposure, we trained this procedure in the cadaver lab proctored by Dr. Marion Durand and found this to be very helpful (Figure 2). Note that during the handling of the bronchus the light of the bronchoscope can easily be seen transbronchially with the infrared mode (Firefly®, Intuitive Surgical®) which gives extra guidance. 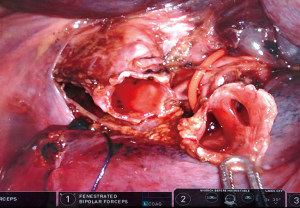 Figure 2 ‘Peri-operative’ view of a cadaveric sleeve middle lobe resection during a workshop with Dr. Marion Durand. In the upper part the open intermediate bronchus can be visualized, below the lower lobe bronchus with segmental orifices. A sling alllows retraction of the pulmonary artery.

Peri-operative bronchoscopy allows a quality check of the anastomosis. A single misplaced stitch can result in narrowing of the orifices of the lower lobe segments.

Final pathology confirmed a typical carcinoid of 1.4 cm. The bronchial margins of the intermediate bronchus and lower lobe bronchus were free of tumour. The mediastinal, hilar and interlobar lymph node stations were all negative. Bronchoscopy at day 2 showed an inflamed but patent anastomosis visualizing both S6 and S7–10 segmental orifices. The thoracic drain was removed at day 4 when fluid output was less than 450 cc. Hospital stay was 6 days. Around day 60 the patient consulted because of persisting coughing, this was treated conservatively and absent at day 90. At one year, the patient was symptom free. Lung function test was normal. A CT-scan showed the usual postoperative changes with a patent bronchus to the lower lobe. Further follow-up up to ten years after surgery is planned as recurrence of typical carcinoid presents late. All procedures performed in studies involving human participants were in accordance with the ethical standards of the institutional and/or national research committee(s) and with the Helsinki Declaration (as revised in 2013). Written informed consent was obtained from the patient.

The author presented the technical steps of a sleeve middle lobectomy on a robotic platform. While the feasibility of a VATS sleeve middle lobectomy has been beautifully demonstrated by Dr. Gossot and Dr. Gonzalez Rivas, and the author has experience with uniportal and multiportal VATS sleeve resections, I think that—certainly for this procedure—the robotic platform can bring added value (8,10). The lateral 30° camera position allows both anterior and posterior view, anterior for a classic middle lobe resection, followed by a posterior view for the sleeve anastomosis. The third instrument port allows retraction of the overlying pulmonary artery that obstructs the view to the distal intermediate bronchus and lower lobe segments. Suturing at the level of the orifices of the segmental bronchi is technically demanding, but facilitated through the robotic platform. However, even with the availability of a robot, the surgeon needs to be experienced to achieve a good result.

To avoid losing tension and locking while stitching, short barbed wires can be used (15 cm V-Loc® 3/0 or 4/0). Avoiding the necessity of a first knot is an additional feature. Results of widespread use of this type of wire in bronchial anastomosis should be published. Durand et al. and Cosgun et al. found no issues in their robotic sleeve procedures with this type of wire, Nakagawa et al. had one anastomotic stenosis out of a total of four cases, not needing any re-intervention (11,13,14). Another advantage of the robotic platform is the ease of the lymphadenectomy. Debate on the quality of nodal (mediastinal) clearance, comparing open, robotic and VATS approaches, is ongoing, with RATS showing equal or better results than VATS (15-17).

Typical indications are small intrabronchial lesions at the orifice of the middle lobe bronchus without involvement of the lower lobe segmental bronchi.

Absolute contraindication for a sleeve middle lobectomy is a situation where avoiding a bilobectomy would result in an incomplete resection. Especially when positive nodes or an extra-bronchial involvement of the tumour at the level of the tertiary carina are present, care has to be taken to achieve a complete resection, preferably by a bilobectomy.

In conclusion, a sleeve middle lobectomy is feasible minimally invasively. Performing a minimally invasive sleeve middle lobectomy avoids a thoracotomy and lower bilobectomy. The main advantage of the robotic platform is, first, the possibility of obtaining a good exposure despite the overlying pulmonary artery of the lower lobe. An anterior view can be obtained for the middle lobe resection and a posterior view for the anastomosis of the intermediate bronchus with lower lobe bronchus. Second, the robotic platform helps exact angulation of the needle and careful stitching close to the orifices of the segments.

Provenance and Peer Review: This article was commissioned by the Guest Editor (Jean-Marc Baste) for the series “Robotic Assisted Thoracic Surgery: Advanced Procedures in Lung and Mediastinum: From Post-induction TTT (immunotherapy) to Sleeve Resection, Complex Segmentectomies and Extended Thymectomy for Myasthenia Gravis” published in Journal of Visualized Surgery. The article has undergone external peer review.

Reporting Checklist: The author has completed the CARE reporting checklist. Available at http://dx.doi.org/10.21037/jovs-20-50

Conflicts of Interest: The author has completed the ICMJE uniform disclosure form (available at http://dx.doi.org/10.21037/jovs-20-50). The series “Robotic Assisted Thoracic Surgery: Advanced Procedures in Lung and Mediastinum: From Post-induction TTT (immunotherapy) to Sleeve Resection, Complex Segmentectomies and Extended Thymectomy for Myasthenia Gravis” was commissioned by the editorial office without any funding or sponsorship. The author has no other conflicts of interest to declare.

Ethical Statement: The author is accountable for all aspects of the work in ensuring that questions related to the accuracy or integrity of any part of the work are appropriately investigated and resolved. All procedures performed in studies involving human participants were in accordance with the ethical standards of the institutional and/or national research committee(s) and with the Helsinki Declaration (as revised in 2013). Written informed consent was obtained from the patient for publication of this case report and accompanying images/video. A copy of the written consent is available for review by the editorial office of this journal.