Aortic surgery such as replacement of the root, arch and thoracoabdominal aorta (TAA) requires reimplantation of branch vessels into the main aortic graft. There are various options in the techniques of branch vessel reimplantation and the preference varies among surgeons and according the target segment replaced (Figures 1,2). The choice of technique may affect the conduct of the operation and even the surgical outcome sometimes. The aim of this article is to describe the technical details of TAA replacement focusing on the reimplantation of segmental arteries and visceral branches using a branched prosthetic graft. We present the following case in accordance with the CARE reporting checklist (available at https://jovs.amegroups.com/article/view/10.21037/jovs-20-115/rc). 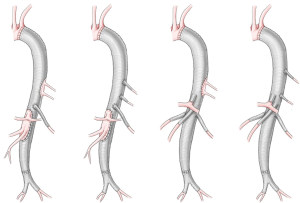 The technique described here is being used recently in almost all cases of TAA replacement in our center. As long as computed tomographic (CT) image of the aorta in good quality is available, only echocardiographic examination is added to the routine laboratory examinations required for general anesthesia. Identification of the origin of Adamkiewicz artery by additional CT or magnetic resonance imaging is not a part of our preoperative examination.

The patient shown in the video is a 42-year-old female who had presented with chronic type B dissection, the aortic root aneurysm, and Marfan syndrome 7 years ago. She underwent valve-sparing root replacement (reimplantation procedure) at that time, during which total arch replacement with classic elephant trunk technique was performed concomitantly. During the follow-up period, the TAA aneurysm of Crawford type II progressively enlarged to reach the maximal diameter of 5.5 cm. All procedures performed in this study were in accordance with the ethical standards of the institutional and/or national research committee(s) and with the Helsinki Declaration (as revised in 2013). Written informed consent was obtained from the patient for publication of this case report and accompanying images. A copy of the written consent is available for review by the editorial office of this journal.

For anesthesia, double-lumen tube was inserted into the trachea. Arterial pressure monitoring catheters were inserted into the right radial and femoral arteries. A large-bore triple-lumen catheter was inserted into the right internal jugular vein. Additional monitoring equipment were transesophageal echocardiographic probe, near-infrared spectroscopic cerebral oxygen monitor, nasopharyngeal and rectal temperature probes. In our practice, lumbar cerebrospinal spinal fluid (CSF) drainage catheter is inserted on the operation day just before positioning and draping the patient. The CSF catheter is opened to drain by gravity, while the hourly drainage amount is kept below 10 mL. CSF pressure is not monitored.

The operation shown in Figure 3 and the attached video was proceeded as the following. The aorta was exposed via a curvilinear thoracoabdominal incision through the 6th intercostal space. With the presence of the elephant trunk inserted during the previous surgery, proximal clamping was not a technical issue in this particular patient and did not require deliberate fracture of the 6th rib which is frequently required in the other patients to gain better exposure of the proximal descending aorta near the arch. After transperitoneal exposure and medial rotation of the abdominal viscera followed by circumferential incision of the diaphragm (start of Video 1), exposure of the entire descending aorta was completed. We feel more comfortable with using what we call bar and wire technique instead of using self-retaining retractor blades. 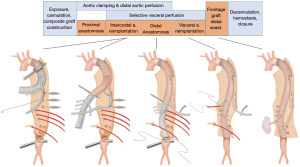 Before clamping the aorta, we identified as many intercostal arteries as possible and all intercostal arteries above T7 level were closed with metal clips. At this stage, a 4-branch graft (GelsoftTM Coselli, Terumo Aortic, Inchinnan, UK) was unpacked and tailored to the adequate length and a 10 mm knitted Dacron graft (Hemagard, Maquet GmbH & Co., Rastatt, Germany) was attached to the proximal part of the aortic graft. After systemic heparinization, the left femoral artery and vein were cannulated for partial cardiopulmonary bypass, which has been our preferred method of distal aortic perfusion. The proximal anastomosis was performed while the proximal half of the descending thoracic aorta was isolated by segmental clamping and distal aortic perfusion was maintained by femorofemoral cardiopulmonary bypass.

Then, the distal aortic clamp was moved to the infrarenal aorta and the remaining part of the TAA was longitudinally incised. The intercostal and lumbar arteries showing copious back-bleeding were rapidly obliterated with sutures, and the left sided intercostal arteries arising at 9th and 12th thoracic vertebra level were selected and temporarily occluded with bulldog clamps. Selective visceral perfusion using 9 Fr and 12 Fr balloon catheters (Pruitt® catheter, LeMaitre Vascular, Burlington, USA) was started at this stage with the flow rate of 100 mL/min per branch. And then, the intercostal arteries were sequentially anastomosed to the side of the parallel 10 mm graft. The size of the hole made in the graft was around 2 cm and 4-0 Prolene running suture was used. Reimplantation of one branch took 5 to 10 minutes.

As the next step, we performed the distal anastomosis of the main graft before reimplanting the visceral branches so that we could turn off the cardiopulmonary bypass at earlier stage. The visceral arteries were reimplanted in the sequence of right renal, superior mesenteric, celiac, and the left renal. Finally, the distal end of the parallel graft was anastomosed to the main graft under partial clamping (end of Video 1). The skin-to-skin total operation time was 299 minutes and the duration of femorofemoral bypass was 63 minutes.

The postoperative course was uneventful. The patient was extubated 3 hours after surgery and was moved out of the intensive care unit on the next day. The CSF drainage catheter was clamped at 24 hours after surgery and removed on the following day. She was discharged to home on the 11th day. In the CT scan taken before discharge, all visceral branches and both of the two reimplanted intercostal arteries were patent (Figure 4).

Figure 4 CT images of the case shown in the video; (A) preoperative, (B-D) postoperative images. The intercostal arteries reimplanted into the frontage graft at two levels were well visualized (arrows).

Based on the huge experience of Crawford and his successors, i.e., Dr. Coselli and Dr. Safi, direct reimplantation of branch vessels as a large en bloc inclusion patch has been widely adopted as the standard technique of TAA replacement (1). Such technique may have some drawbacks as the following: (I) the suture line gets longer and requires more time for anastomosis when the reimplanted branches are widely apart as the result of severe dilatation of the corresponding aortic segment (2); (II) calcified plaques and muddy atheroma around the branches increase the difficulty of making secure and hemostatic anastomosis; (III) reperfusion of reimplanted intercostal arteries may be delayed in case the visceral reimplantation patch and low intercostal artery patch are close to each other making it difficult to clamp the graft between the two patches; (IV) reimplantation of branches arising from tortuous and angulated aorta as a large patch may cause angulation and torsion of the prosthetic graft; (V) the large reimplantation patch may undergo late aneurysmal dilatation especially in patients with connective tissue disorder (3-5).

After advent of pre-sewn branched graft into the market, many surgeons adopted it in preference to the inclusion patch technique. Although there has been no study directly comparing the outcome of the two techniques, there seems to be no big difference in terms of the short-term outcome. The concern about the patency of branch grafts turned out to be irrelevant in case of visceral branch reimplantation because excellent patency rate was shown by a few studies (6-8).

In contrast to the visceral branch reimplantation, the patency rate of the interposition grafts reimplanting the intercostal arteries were shown to be suboptimal (8,9). Such fact made us modify the reimplantation technique for intercostal arteries, in which the target branches were individually anastomosed in sequential manner to a parallel side graft attached to the main aortic graft at both ends. With this technique, the patency rate of reimplanted intercostal arteries significantly improved (Table 1), which seems to validate our speculation that the modified technique can have better patency by avoiding size mismatch between the interposition graft and the target arteries. In addition, we believe that our technique, named “frontage graft” after the service road running parallel to a highway, has advantages such as providing the versatility to deal with diverse anatomic situations, allowing a little faster reperfusion of the reimplanted intercostal arteries, and easier control of anastomotic bleeding, avoiding the risk of later patch aneurysm.

*, correspond to 30% of TAA replacement performed during the same period; **, only one of them was caused by anastomotic bleeding from the frontage graft; †, total occlusion in one (the other two grafts were partially patent and supplied the reimplanted intercostal arteries via the non-occluded side).

Other tips and pitfalls

In conclusion, we believe that branch graft technique is more versatile and comfortable option for extensive TAA replacement. Our technique using a frontage graft for intercostal artery reimplantation is thought to have a few advantages with good patency rate of the target branches.

Provenance and Peer Review: This article was commissioned by the Guest Editors (Roberto Di Bartolomeo, Davide Pacini, Mohamad Bashir) for the series “Best Video Presentation Prize for the 10th Postgraduate Course on ‘Surgery of the Thoracic Aorta’ in Bologna” published in Journal of Visualized Surgery. The article has undergone external peer review.

Reporting Checklist: The authors have completed the CARE reporting checklist. Available at https://jovs.amegroups.com/article/view/10.21037/jovs-20-115/rc

Conflicts of Interest: Both authors have completed the ICMJE uniform disclosure form (available at https://jovs.amegroups.com/article/view/10.21037/jovs-20-115/coif). The series “Best Video Presentation Prize for the 10th Postgraduate Course on ‘Surgery of the Thoracic Aorta’ in Bologna” was commissioned by the editorial office without any funding or sponsorship. Both authors have no other conflicts of interest to declare.

Ethical Statement: The authors are accountable for all aspects of the work in ensuring that questions related to the accuracy or integrity of any part of the work are appropriately investigated and resolved. All procedures performed in this study were in accordance with the ethical standards of the institutional and/or national research committee(s) and with the Helsinki Declaration (as revised in 2013). Written informed consent was obtained from the patient for publication of this case report and accompanying images. A copy of the written consent is available for review by the editorial office of this journal.