The prevalence of pancreatic cystic neoplasm in the asymptomatic general population is up to 2.4%. The intraductal papillary mucinous neoplasm (IPMN) is its most common type and represents 15–30% among these lesions (1,2). IPMN has been reported to be an indolent pancreatic lesion, and resection might be the conduct with the best outcomes for non-invasive lesions with high risk of undergoing malignant transformation (3). However, the most appropriate time for surgical indication is not yet a consensus. Several different guidelines aim to establish the most accurate criteria to indicate surgical resection, generating great debates in the pancreatology field. Moreover, there have been few studies that share practical experiences that assess their alignment with these guidelines (4-6).

It is still necessary to recognize that pancreatic resections are related to notorious rates of perioperative complications, which is also a central factor for considering surgical indication (3,7). Recent analysis has stated that minimally invasive surgery for IPMN have as good as postoperative and oncological outcomes when compared to the open approach (8).

In this report, we share our experience performing a robotic Whipple procedure for the treatment of a branch duct IPMN, which surgical criteria were based on Fukuoka consensus guidelines. We present the following article in accordance with the CARE reporting checklist (available at http://dx.doi.org/10.21037/jovs-20-96) (9).

We report the case of a 56-year-old woman, asymptomatic, who was referred to our institution for the treatment of a cystic lesion in the head of the pancreas, with two years of evolution and no surgical criteria thenceforward. In clinical follow-up, an abdominal magnet resonance imaging (MRI) showed the growth of the cystic lesion from 1.2 cm in to 3.1 cm in diameter and the presence of a new mural nodule in it. A magnetic resonance cholangiopancreatography (MRCP) was also performed, revealing a dilated main pancreatic duct of 7 mm, an enlargement of 5 mm in 1 year interval (Figure 1). Her physical exam and history were unremarkable, except of an acute pancreatitis. No past interventions were reported by the patient. 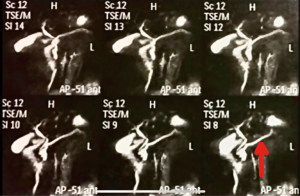 Due to the aforementioned criteria, which corroborate a high risk of malignancy of the lesion, it was considerate that the most desirable conduct for the patient would be a robotic-assisted Whipple procedure. The patient agreed to undergo the proposed treatment. All procedures performed in studies involving human participants were in accordance with the ethical standards of the institutional and/or national research committee(s) and with the Helsinki Declaration (as revised in 2013). Written informed consent was obtained from the patient for publication of this case report and accompanying images/video. A copy of the written consent is available for review by the editorial office of this journal.

As a pre-operative routine of our service, the patient underwent nutritional assessment. The patient was prescribed an enteral immunomodulatory diet.

We performed a robotic-assisted Whipple procedure in this patient, shown in the video (Video 1). Placed in a supine position, with the arm alongside the body, the patient was submitted to general anesthesia. The port placement was made as follows: endoscopic port just below and at the right side of the umbilicus, arms number 3 and 1 at the patient left side and arm number 2 and assistant port at the patient right side (Figure 2). The peritoneal cavity was then insufflated with carbon dioxide gas and the patient was settled in steep reverse Trendelenburg position.

The resection phase started accessing the lesser sac and identifying the gastrocolic venous trunk, which was promptly sectioned in order to avoid its avulsion during the perioperative period. A distal partial gastrectomy and cholecystectomy was performed. A retroperitoneal and hepatic pedicule lymphadenectomy were included in the procedure. Subsequently, a Kocher maneuver was done followed by Treitz ligament and jejunal section. The pancreatic section was carried out using a monopolar energy hook device. The resected specimen was removed through a Pfannestiel incision (Figure 3). It was performed a duct-to-mucosa pancreaticojejunostomy using 4.0 prolene suture. The biliary tract was reconstructed with a side-to-end choledochojejunostomy using 4.0 polydioxanone suture. Lastly, a precolic gastrojejunostomy was made by a surgical stapler and reconstructed the gastrointestinal tract. An anterior and a posterior peripancreatic drains were safely placed at the end of the procedure. The operation took fully place in the supramesocolic compartment. 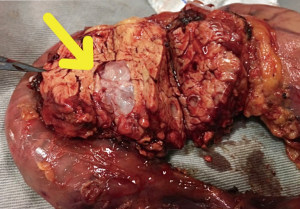 Figure 3 Surgical specimen with the cystic lesion filled with mucinous material in the head of the pancreas (yellow arrow).

The immediate postoperative of the patient was unremarkable. Both posterior and anterior abdominal drains placed at the end of the operation were removed on postoperative day 5, when they stopped draining secretion.

Under optical microscopy, it was revealed not only free resection margins, but also absence of lymph nodes metastasis. Notwithstanding the great surgical result, the examination also confirmed histologic diagnosis of branch duct IPMN with adenocarcinoma foci.

No long-term postoperative complications were reported and the patient remains asymptomatic in clinical follow-up. The patient received adjuvant chemotherapy. The most relevant data from this case report are organized into a timeline figure (Figure 4). 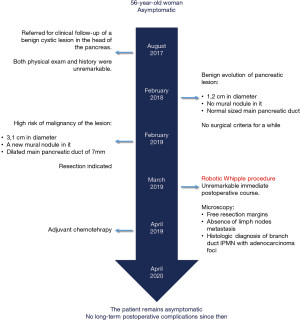 Figure 4 Timeline from this case report.

Surgical management of IPMN is still a controversial issue among major guidelines on the topic (4-6). Although IPMN exhibits a broad spectrum of neoplastic transformation, from low-grade dysplasia to invasive cancer, its natural evolution is still not completely clear. According to reports in literature, 80% of resected patients for branch duct IPMN presented histological diagnosis of low-risk lesion, evidencing a high rate of unnecessary interventions (10). Thus, it is indispensable that current guidelines be accurate regarding early identification of aggressive clinical behavior and thereby precisely indicate surgical resection.

The patient in the present case underwent surgery based on the criteria outlined in the Fukuoka consensus guidelines for the management of IPMN of the pancreas (4). The patient remained in follow-up for two years, period in which signs of malignancy were recognized on imaging studies, despite the absence of symptoms related to the lesion. The “worrisome features” mentioned in the consensus that guided our conduct include cyst ≥3 cm, enhancing mural nodule and main pancreatic duct size 5–9 mm (4). Our experience is aligned with this consensus confirming the convenience of this tool for proper early surgical intervention.

The present study provides a quite detailed description of the follow-up and robotic approach of a branch duct IPMN case, which achieved a favorable initial outcome. In addition, the well-described surgical technique allows it to be replicated by qualified robotic surgeons. However, our study has a few potential limitations. Firstly, it should be noted that the duration of follow-up may not be sufficient for detect post-operative recurrence and the patient’s future outcome is still unknown. Secondly, it is not possible to generalize her evolution, demanding further surveillance and research, particularly directed to long-term results of robotic approach in IPMN cases. Despite these concerns, we expect that the present study accumulates scientific data for further analysis.

Once an indolent pancreatic disease, IPMN usually has a good prognosis and may be managed both clinically and exceptionally, surgically. Thus, surgical indication is restricted to those cases in which there is a high risk of undergoing malignant transformation. Fukuoka consensus was found to be a great tool to predict malignancy and to consider surgical resection. With similar surgical techniques, the robotic Whipple procedure appears to be feasible for IPMN selected patients, and may result in favorable oncological outcomes.

Reporting Checklist: The authors have completed the CARE reporting checklist. Available at http://dx.doi.org/10.21037/jovs-20-96

Conflicts of Interest: All authors have completed the ICMJE uniform disclosure form (available at http://dx.doi.org/10.21037/jovs-20-96). The authors have no conflicts of interest to declare.

Ethical Statement: The authors are accountable for all aspects of the work in ensuring that questions related to the accuracy or integrity of any part of the work are appropriately investigated and resolved. All procedures performed in studies involving human participants were in accordance with the ethical standards of the institutional and/or national research committee(s) and with the Helsinki Declaration (as revised in 2013). Written informed consent was obtained from the patient for publication of this case report and accompanying images/video. A copy of the written consent is available for review by the editorial office of this journal.