Arch replacement following endovascular arch repair for an infected stent: case report
Video 1 Coronal views of the preoperative PET-CT confirming the presence of the endovascular infection by demonstrating intense avidity on the innominate artery and distal aortic arch.
Video 2 Axial views of the preoperative contrasted CT Aorta demonstrating the total arch and descending thoracic aorta endovascular repair with ZenithTM Arch and Alpha distal extension modular stents (Cook) finishing above the visceral segment. Note the residual chronic aneurysm sac within the descending thoracic aorta, without the presence of any endoleaks. Due to the stent graft infection there is a dislocation of the innominate artery stent branch and an expanding aneurysm on the same vessel.
Video 3 Intraoperative video showing the sequence of the operation highlighting the removal of the stent and infected material and further reconstruction of the aortic arch, proximal descending thoracic aorta and supra-aortic trunks using a Thoraflex PlexusTM (Terumo Aortic, Vascutek) with cardiopulmonary bypass, moderate hypothermic circulatory arrest and antegrade cerebral perfusion.
Video 4 Axial views of the postoperative contrasted CT Aorta, demonstrating a satisfactory aortic repair with a ThoraflexTM Plexus. The stented portion sits inside the previous stent of the descending thoracic aorta. The aortic arch was replaced with individual reimplantation of the right subclavian artery and both right and left common carotid arteries. Previous bypass from left subclavian to left common carotid noted. Note the presence of mild pericardial and bilateral pleural effusions at postoperative day 7.

Endovascular graft infection is a rare but challenging complication, with a complex diagnosis and no standard treatment. A tailored approach should always be offered with the ultimate goal being to remove the infected graft which is not always feasible due to general fitness or co-morbidities. A multidisciplinary team (MDT) discussion is warranted to find a procedure that combines the best morbidity, mortality and durability results. We present the following case in accordance with the CARE reporting checklist (available at http://dx.doi.org/10.21037/jovs-20-100).

A 78-year-old male with history a previous total arch endovascular repair of an extensive aneurysm of the distal arch and descending thoracic aorta using a branched arch device into the innominate and left common carotid arteries (Zenith Arch EndograftTM and Zenith AlphaTM endovascular distal extension; Cook Medical, Bloomington, USA) and a prior left common carotid to left subclavian bypass 3 years ago, was referred to our department with a confirmed infection of the endovascular graft for consideration of urgent surgery.

He presented with persistent pyrexia of unknown origin and the diagnosis of the graft infection was made base on clinical, microbiological and radiological features. The original blood cultures revealed a growth of Escherichia coli, and he was treated according to sensitivity with a combined regime of Meropenem and Vancomycin (Figure 1). 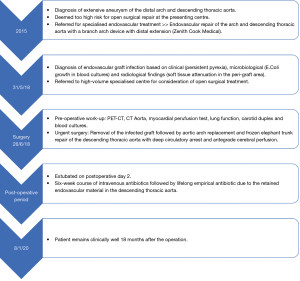 Figure 1 Timeline sequence of events since initial diagnosis of the extensive aortic aneurysm.

All procedures performed in studies involving human participants were in accordance with the ethical standards of the institutional and/or national research committee(s) and with the Helsinki Declaration (as revised in 2013). Written informed consent was obtained from the patient for publication of this case report and accompanying images/video. A copy of the written consent is available for review by the editorial office of this journal.

As part of the preoperative work-up we requested a positron emission tomography-CT (PET-CT) that confirmed infection of the endovascular graft by demonstrating intense avidity in the innominate artery and distal aortic arch (Video 1).

An updated contrasted CT Aorta showed expansion of the aneurysm at the origin of the innominate artery with dislocation of the stent branch, as well as radiological signs of infection within the distal arch / proximal descending aorta (soft-tissue attenuation) and the large residual aneurysm sac extending to the distal descending thoracic aorta (Video 2; Figures 2-4). 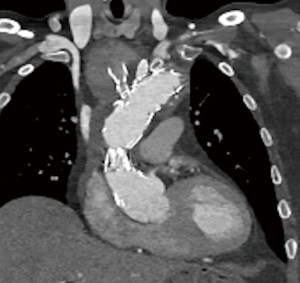 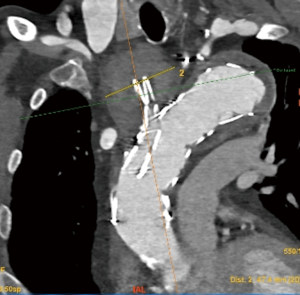 Figure 3 Sagittal view of a preoperative contrasted CT showing the main stent body within the aortic arch and the stent branch into the innominate artery with the accompanying aneurysm. 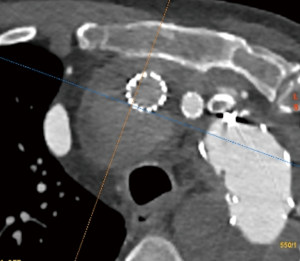 We studied his cardiovascular function with a myocardial perfusion test that revealed a normal left ventricular function and no signs of ischaemia.

Repeated blood cultures were negative, as expected due to the prolong treatment with antibiotics. His white cell blood count was within normal range but C-reactive protein (CRP) levels were elevated at 30 mg/L.

Indication for urgent surgical repair was made based on confirmed infection of the endovascular graft and expansion of the innominate artery aneurysm due to dislocation of the stent branch. We planned to remove the infected endovascular graft via median sternotomy with cardiopulmonary bypass, followed by reconstruction of the aortic arch/descending thoracic aorta and supra-aortic vessels with a frozen elephant trunk device using moderate hypothermic circulatory arrest and antegrade cerebral perfusion (Video 3, Figure 1).

Written informed consent was obtained from the patient for video recording and use of the anonymised material for teaching and research purposes. This case report followed the Helsinki Declaration (2013 version).

The right axillary artery was exposed and after administration of 5,000 units of Heparin, an 8 mm Dacron graft was anastomosed end to side to the artery in anticipation for antegrade cerebral perfusion delivery.

A median sternotomy was then performed, extending the skin incision cranially into the neck to facilitate access to the supra aortic vessels. After full heparinisation (3 mg/kg), cardiopulmonary bypass was established by cannulating the proximal ascending aorta, in an area proximal to the stent, and the right atrium. A vent was inserted in the left ventricle via the right superior pulmonary vein. Myocardial protection was achieved by delivery of cold blood cardioplegia via antegrade route with a DLP® antegrade cardioplegia cannula (Medtronic) inserted in the aortic root.

Cooling process started and, in the meantime, full mobilisation of the supra aortic trunks was achieved passing a tape around the innominate and the left common carotid arteries and snaring them before manipulation of the aorta to prevent embolism of infected debris.

The proximal ascending aorta was then opened at the level of the proximal end of the stent.

The aorta was then opened longitudinally towards the arch, exposing the whole length of the stent, and reaching a cavity with thrombus that was evacuated. The stent and its two chimneys were mobilized finding extensive amount purulent material between the stent and the aneurysm sac at the level of the distal arch/proximal descending aorta. Antegrade cerebral perfusion was then administered by cannulating the side arm sewn onto the right axillary artery and the left common carotid artery directly from its origin. All the debris and purulent material were evacuated and sent for culture and the stent was cut transversally with scissors as distally as possible (Figure 5). The remaining aneurysmal sac at the aortic arch was then resected and the proximal end of the remaining stent was fixed to the descending thoracic aorta with three interrupted 3/0 pledgeted polypropylene sutures in preparation for deployment of the ThoraflexTM device. A previously measured, 30/36×15 mm Thoraflex Plexus 4 HybridTM Stent Device (Terumo Aortic, Vascutek, Scotland, UK) was deployed antegradely into the descending thoracic aorta and the collar was sutured to the proximal rim of the descending aorta with a buttressed two layered 3/0 polypropylene suture. 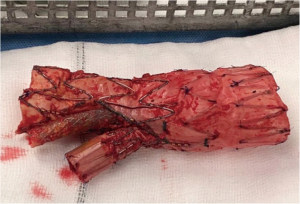 Figure 5 Stent used for the previous endovascular arch repair after surgical removal. Note that the end had to be cut as distal as possible on the descending thoracic aorta as it was not possible to retrieve the whole stent via the median sternotomy.

Distal circulation was then restored by cannulating the perfusion arm of the ThoraflexTM prosthesis and cross clamping the graft prior to the side arm origin as well as the origin of the branches for the supra-aortic trunks.

The proximal anastomosis between the Dacron graft and the ascending aorta was then performed using a buttressed double layer 3/0 polypropylene suture technique. After de-airing the heart, the cross clamp was released and rewarming started.

The left common carotid was then anastomosed to the corresponding branch using a continuous 5/0 polypropylene suture. The innominate artery aneurysm was then excised at the level of the bifurcation of the right common carotid and right subclavian arteries. The right common carotid was reimplanted directly onto the corresponding branch of the ThoraflexTM Plexus, while a separate 8 mm graft was anastomosed end to end to the right subclavian artery and the other end joint to the remnant branch on the ThoraflexTM prosthesis.

Once all the anastomoses were completed and the patient warmed (36.7 °C nasopharyngeal and 35.5 °C bladder), cardiopulmonary bypass was weaned easily with a moderate inotropic and vasopressor support and paced via biventricular epicardial pacing wires. After haemostasis was achieved, the chest was closed in layer onto two mediastinal and pericardial drains.

Microbiology culture and sensitivity studies of the purulent material and the removed stent did not reveal the growth of any microorganism. A 16S ribosomal DNA gene polymerase chain reaction (PCR), was also conducted and did not reveal presence of any bacterial pathogens, Consensus between the surgical team and the microbiologists was to continue lifelong empirical antibiotic due to the retained endovascular material in the descending thoracic aorta. He remains on oral Co-trimoxazole and has not developed any symptoms or signs of infection 18 months after the operation (Figure 1).

Immediate postoperative and follow-up CT scans showed a satisfactory aortic repair, with no presence of further collections (Video 4). Due to the presence of a mild pericardial effusion on the CT scan, a transthoracic echocardiogram (TTE) was requested confirming a global effusion, with a maximum diameter of 2.5 cm laterally, without any haemodynamic repercussion, no respiratory variation or right ventricular collapse. This was treated conservatively and had resolved on the repeated TTE at 6 weeks post discharge.

Surgery should be attempted as first line in young and fit patients and in those unlikely to be resolved by conservative management (i.e., extensive peri-graft purulence, pseudoaneurysm or suspected aorto-enteric fistula) (1-4).

We report the successful treatment of an endovascular graft infection of a previous total arch and descending aorta endovascular repair. Urgent surgical treatment was warranted by the dislocation of one of the stented branches due to the infection as well as an accompanying expanding aneurysm. Surgical treatment consisted on removal of the infected graft followed by reconstruction of the aortic arch and descending aorta. The patient remains well and without any signs of recurrence, on a long-life oral regime of antibiotics.

Professor Oo and Benjamin Adams were the surgeons performing the operation and in charge of the post-operative care. Saleem Jahangeer and Ana Lopez-Marco, Aortic Surgery Fellows, wrote the case report, edited the surgical video and prepared the accompanying images and meeting presentation.

Provenance and Peer Review: This article was commissioned by the Guest Editors (Roberto Di Bartolomeo, Davide Pacini and Mohamad Bashir) for the series “Best Video Presentation Prize for the 10th Postgraduate Course on ‘Surgery of the Thoracic Aorta’ in Bologna” published in Journal of Visualized Surgery. The article has undergone external peer review.

Reporting Checklist: The authors have completed the CARE reporting checklist. Available at http://dx.doi.org/10.21037/jovs-20-100

Conflicts of Interest: All authors have completed the ICMJE uniform disclosure form (available at http://dx.doi.org/10.21037/jovs-20-100). The series “Best Video Presentation Prize for the 10th Postgraduate Course on ‘Surgery of the Thoracic Aorta’ in Bologna” was commissioned by the editorial office without any funding or sponsorship. The authors have no other conflicts of interest to declare.

Ethical Statement: The authors are accountable for all aspects of the work in ensuring that questions related to the accuracy or integrity of any part of the work are appropriately investigated and resolved. Written informed consent was obtained from the patient for video recording and use of the anonymised material for teaching and research purposes. All procedures performed in studies involving human participants were in accordance with the ethical standards of the institutional and/or national research committee(s) and with the Helsinki Declaration (as revised in 2013).