During the last decade, the detection of small nodules has increased dramatically along with the number of CT scans. At the same time, the quality of preoperative imaging has improved with the introduction of preoperative 3D planning (1). Anatomical segmentectomy is therefore becoming more common in Western countries. The optimal approach to minimally invasive anatomical segmentectomy includes a combination of 3-dimensional (3D) visualization, robot-assisted thoracic surgery (RATS), which provides an increased degree of motion and rotation freedom, and small-wristed instruments designed to facilitate complex movements (2,3).

A 75-year-old man with a history of lymphoma presented with ground-glass opacity (GGO) that was detected on a routine chest CT scan (Figure 1). The nodule was hot on PET CT with a standard uptake value (SUV) of 5.4. Preoperative fibroscopy was negative. Forced expiratory volume was 3.73 L (116%) and KCO was 93%. 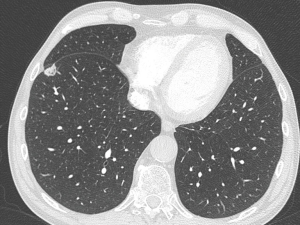 Figure 1 CT scan showing the nodule in the anterior part of the S7–S8 segment.

Figure 2 3D reconstruction (Visible PatientTM) of the right lung. (A) The nodule is marked in green in the whole right lung; (B) anatomical distribution of the branches of the pulmonary artery for the 3 lobes; (C) lung parenchyma volume ventilated by the segmental bronchus B7–B8.

Under general anesthesia, after selective intubation, the patient was placed in lateral decubitus on axillary rolls, with the right arm on an armrest.

The DaVinci Xi Surgical system (Intuitive surgical SAS, Montrouge, France) was placed perpendicular to the table. The patient position was similar to conventional surgery, with the head placed close to the anesthesia station. 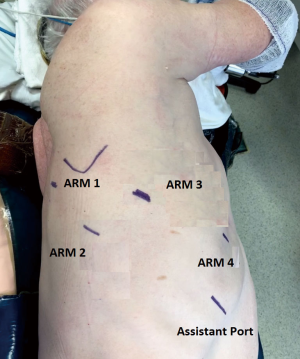 The surgical assistant was positioned in front of the patient with a long suction tip.

After a mediastinal lymph node dissection (not shown in the video), the right upper and middle lobes were retracted apically with Arm 1, the major fissure was opened, and the main pulmonary artery was dissected free with the bipolar Maryland forceps. The anterior part of the fissure was completed with bipolar forceps after identification of the middle lobe artery.

After identifying A6, the intersegmental lymph node (level 12) was dissected free and sent for frozen section. The basal artery was then dissected in order to identify A7+A8 and A9+A10, using the preoperative 3D reconstruction of the artery. A7+A8 was stapled and transected with a 30 mm vascular curved stapler. The basilar bronchus was then exposed and we identified B7+B8 and B9+B10 using the preoperative 3D reconstruction. After isolation, B7+B8 were transected with a 45-mm purple curved reload. The basilar vein was exposed and V7+V8 were identified and transected using a 30-mm vascular curved reload.

Using indocyanine green and firefly fluorescence, we identified the intersegmental plane, which was marked using the bipolar Maryland forceps. Then the intersegmental plane was stapled and transected using a 60-mm purple reload stapler. The specimen was then inserted in a retrieval bag. The airseal port was removed, and the specimen was removed following enlargement of the airseal port incision.

The total time for the procedure was 85 min, with blood loss of 100 mL. The chest tube was removed on day 3, and the patient was discharged on day 4.

Anatomical segmentectomy of the basal segments is a challenging procedure for many reasons. Firstly, there are multiple variations in the anatomy of the arterial and venous branches, and in the bronchial tree. Secondly, it is essential to obtain sufficient surgical margins without peroperative palpation of the nodule. Thirdly, it is challenging to delineate the intersegmental planes of the lung (4). In our opinion, segmentectomy is a complex procedure that should be performed exclusively by highly experienced teams, especially when a minimally invasive approach is planned, and we recommend that S7–S8 segmentectomy always be performed with preoperative 3D imaging based on the results of a high-resolution CT scan.

The authors would like to thank Suzanne Rankin (Dijon University Hospital) for revising the manuscript.

Provenance and Peer Review: This article was commissioned by the Guest Editor (Jean-Marc Baste) for the series “Robotic Assisted Thoracic Surgery: Adavanced procedures in lung and mediastinum: From post-induction TTT (immunotherapy) to sleeve resection, Complex segmentectomies and Extended Thymectomy for Myasthenia Gravis” published in Journal of Visualized Surgery. The article has undergone external peer review.

Conflicts of Interest: All authors have completed the ICMJE uniform disclosure form (available at http://dx.doi.org/10.21037/jovs-2020-12). The series “Robotic Assisted Thoracic Surgery: Adavanced procedures in lung and mediastinum: From post-induction TTT (immunotherapy) to sleeve resection, Complex segmentectomies and Extended Thymectomy for Myasthenia Gravis” was commissioned by the editorial office without any funding or sponsorship. PBP reports personal fees from Intuitive Surgical®, personal fees from Medtronic®, during the conduct of the study. The authors have no other conflicts of interest to declare.

Ethical Statement: The authors are accountable for all aspects of the work in ensuring that questions related to the accuracy or integrity of any part of the work are appropriately investigated and resolved. The study was approved by the University of Burgundy.