Erectile dysfunction is a common problem that a large portion of the aging male population must face every day. It is estimated that over 50% of men ages 40-70 face some degree of erectile dysfunction (1). To address this condition, multiple treatment modalities are now available, ranging from medical to surgical management. Penile prosthesis surgery has been a treatment option for men since 1973 (2), and it remains to be the gold standard treatment for medication and vacuum device refractory erectile dysfunction. Significant advancements in the field of genitourinary prosthetics have allowed patients to experience excellent long term outcomes with low complications rates, with a 10-year overall device survival of 86.6% and an infection rate of <2% (3). Device erosion is an exceedingly rare complication (4), however once recognized, explantation of the device is warranted to prevent spread of infection or worsening of any deformity caused by the erosion. We describe a case of lateral device erosion through the corpora, and the technique we used to repair it.

Our patient is a 65-year-old gentleman with a history of hypogonadism, erectile dysfunction and Peyronie’s Disease since 2012. He initially saw another provider and had a malleable implant placed in 2014, which was changed to a three-piece implant in 2015. He had been successfully using this device since then, however he has always noticed an irregularity on the right side. He presented to our office complaining of intermittent gross hematuria and new onset right scrotal swelling for approximately one month.

His other medical history is notable for hyperlipidemia, obstructive sleep apnea, chronic anemia, anxiety and depression. He is a retired equipment operator and has never been a cigarette smoker. On exam, his penile implant was palpable and cycled easily. The pump was nontender, and there was no fluid or collection noted around the pump. The reservoir was nonpalpable, and the cylinders extended into the glans equally. We did make note of a dog-ear deformity on the right-hand side of the implant that seemed superficial (Figure 1A,B).

Figure 1 Bulging deformity on the right side close to the base.

As part of his gross hematuria workup, he underwent a CT Urogram, which was negative for any significant urologic findings. We did perform a cystoscopy during his initial office visit, and we did not find any urethral abnormalities, evidence of device erosion into the urethra, or muscosal anomalies in the bladder.

Given the findings on physical exam, we were concerned that the device cylinder had eroded laterally through the tunica. At this point, we made the decision to proceed with surgery, which would include revision of the device, washout, and possible grafting of the corporal defect.

As part of our standard pre-operative workup, we checked a CBC, BMP, Urinalysis, and Culture, which were all normal. Pre-operative risk stratification was also performed by the patient’s primary care doctor, who deemed him low risk for the planned procedure.

Perioperative antibiotic prophylaxis was undertaken with Piperacillin/Tazobactam and Linezolid. The Linezolid was started in the pre-operative unit, and all prophylaxis was administered within one hour of incision. After induction of general anesthesia the skin of the suprapubic region, groin and scrotum was clipped. An exam under anesthesia was performed prior to scrub to confirm that the proximal portion of the device was in good position in the perineum. The device was inflated and was noted to be straight with both cylinders extending into the corpora, however upon deflation, we noted the same dog-eared portion of the implant that was felt not to be within the tunica albuginea. The area was then prepped with chlorhexidine scrub followed by Chloraprep paint. A 16-Fr foley catheter was placed in the sterile field.

Due to the location of the deformity, we felt a subcoronal approach would be most appropriate. We started with a circumcising incision and brought down the penile skin to deglove the penis. When we got to the area of concern on the right-hand side, there was a thin layer of tissue that was not the tunica covering the dog-eared portion of the implant (seen in Video 1). We then opened the corporal space on the side in a very lateral fashion at the abnormal area to avoid any injury to the urethra.

After the corporal space was opened, we were able to see the area where there was a defect. There was thick tunica along with pseudocapsule both proximal and distal to the defect, and it appeared that the tunica was perforated at the area of concern. The cylinder was removed and carefully secured between two blue towels, ensuring no contact with the skin. We decided to perform the interposition of the medial aspect of the pseudocapsule laterally to reinforce the pseudocapsule present on the side (Figure 2). The medial aspect of the pseudocapsule was sharply dissected off the corpora to provide more mobility. Once the flaps were created, we performed a modified Mulcahey washout of the area. Using a Keith needle, we drove the implant through the glans again, replacing it into its original position. The distal portion of the tunica was closed using PDS suture. Once the distal tunica was secured, the pseudocapsule was externalized and closed separately with PDS suture as well (Figures 3A,B). Once completely closed, the device was inflated and deflated, and it was noted to be much better reinforced in the area that previously had the dog ear (Figure 4). The Darto’s fascia was then brought up and closed with Vicryl suture. The penile skin was then closed with Chromic suture. The patient was then awoken, extubated and brought to the recovery room in stable condition. A video of the critical portion of the procedure, with the flaps dissected out, can be seen at the bottom as a separate figure. 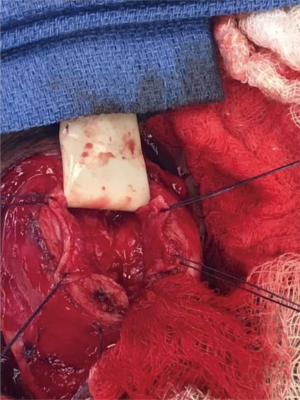 Figure 2 Corporal space opened with the cylinder partially removed and secured between two blue towels, and the pseudocapsule secured with silk stay sutures.

Figure 3 Distal tunica being closed with a partial view of the pseudocapsule being externalized and closed as well. 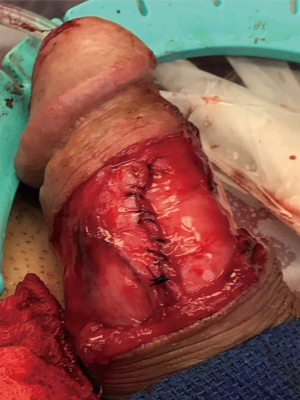 Figure 4 Tunica and pseudocapsule closed with the device inflated and no obvious visual deformity.

He stayed overnight in the hospital for observation and was discharged on post-operative day 1 after passing his void trial. He was discharged with one week of antibiotics. He was seen approximately 4 weeks after surgery. He had no complaints of pain and could not feel the dog ear anymore. He had not started using the device yet. The incision was well-healed and there was no visible or palpable deformity. The appearance of his penis at the follow-up appointment can be seen in Figure 5. He did no-show multiple appointments after his first post-operative visit, however he did return approximately 8 months after surgery, with complaint that the deformity recurred approximately four months after surgery. We felt that the cylinder itself had memory that was causing this deformity, since it did not feel herniated as it did before, and when inflated, the penis felt and appeared completely normal. We discussed further surgical options including utilization of the AMS CX™ implant, since it does not have the same dog ear deformity, however patient did not want to pursue any more surgery, as he was moving out of the area. 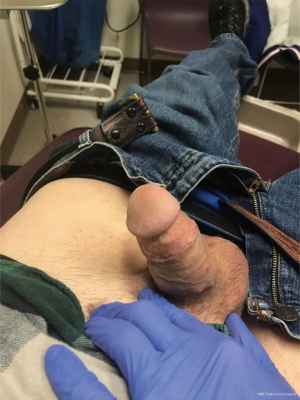 Penile implant erosion is a rare complication, and there is no defined “best” technique to perform the repair in order to prevent recurrence. We describe an unusual case of lateral corporal erosion, and the use of native tissue to perform a corporoplasty and close the defect caused by the device. What makes this clinical scenario even more unusual is that the defect had been present since his initial surgery two years prior. It is possible that over the two years that his device was in that configuration, the material of the cylinder itself developed a memory to remain that way when deflated, and the “recurrence” he felt was likely just the normal configuration, since it was not as superficial as it was prior. Though it may not have re-eroded, the pressure point caused by the cylinder puts the patient at risk for erosion again in the future, and we feel that explantation and re-implant with a new three-piece is warranted, however the patient’s social situation did not allow for this.

Provenance and Peer Review: This article was commissioned by the Guest Editors (Martin Gross, Jay Simhan and Faysal A. Yafi) for the series “Penile Prosthesis Surgery” published in Journal of Visualized Surgery. The article has undergone external peer review.

Conflicts of Interest: All authors have completed the ICMJE uniform disclosure form (available at http://dx.doi.org/10.21037/jovs.2020.02.02). The series “Penile Prosthesis Surgery” was commissioned by the editorial office without any funding or sponsorship. The authors have no other conflicts of interest to declare.