Esophageal cancer is generally the eighth most common cancer and the sixth most common reason of tumor-related deaths (1). Although the current treatment regimented and surgical methods improved, the long-term survival of esophageal carcinoma does not seem to be significantly improved. It is reported that the local recurrence is main recurrence pattern after esophageal cancer surgery (2). This suggests that although the tumor lesion is removed surgically, there may still be residual invisible tumor around it, leading to post operational local recurrence even distant hemorrhagic metastasis in the short term after surgery. Traditional radical resection of esophageal cancer is mostly the substation dissection of multiple esophageal tumor lesions and surrounding lymph nodes. That might be recessive tumor residue after operation, leading to achieve the unideal radical treatment. While, radical resection of esophageal cancer in Japan emphasizes the total resection of esophageal lesions and dissection of three fields lymph nodes, with a greater postoperative complication (3). The concept of total mesolectal resection is a key technique in the radical operation of gastrointestinal tumors and has achieved satisfactory results in clinical practice of colorectal cancer surgery (4). In clinical practice, we found a similar mesangial structure in the esophagus. Based on en-bloc tumor resection and three-field lymph node dissection, we put forward the concept of “the modified total meso-esophageal esophagectomy”.

We present the following case in accordance with the CARE Guideline.

A 54-year-old man with dysphagia for 2 weeks. There was no neoadjuvant radiotherapy or chemotherapy before operation. No obvious abnormality in family history, personal history and past history. The endoscopic find an ulcerative lesion of esophagus 35 to 38 cm form the incisors and encompassing half the luminal circumference. The magnetic resonance imaging (MRI) scans of the patient’s head did not reveal evidence of distant metastasis. Workup continued with a barium esophagogram, which demonstrated an obscure-bordered, partially-obstructing middle esophageal mass. The pathologic biopsy confirmed that the mass was moderately differentiated esophageal squamous cell carcinoma. The computed tomography (CT) scan showed the middle esophagus slight thickening and the mediastinal lymph nodes slight enlarged. The fat space around the esophagus is still clearly visible in the CT imaging. In light of the patient’s symptoms was due to mass effect of the esophagus carcinoma, surgical resection was recommended. Considering all preoperative examination findings, the clinical TNM of patient was cT2–3N0M0. The patient gave consent to surgery of the esophageal carcinoma by a minimally invasive thoracoscopic approach.

After standard port placement, esophagus and mesoesophagus with paraesophageal lymph nodes was dissected from the lower to upper esophagus, with care taken to preserve the vagus nerve and its branches (especially, the recurrent laryngeal nerve). Firstly, the lower segment of the mesoesophagus was separated at the anterior esophagus-pericardial space and the posterior esophagus-spine space. Then, complete middle-upper segment mesoesophagectomy was performed at the mesoesophageal roots of the esophagus-trachea space(anterior) and the esophagus-spine space(posterior) from bottom to top through “the esophageal suspension method” (Figures 1,2,3,4). Final pathologic examination demonstrated the lesion to be moderately differentiated esophageal squamous cell carcinoma, lymph node metastasis was found in the paraesophageal lymph nodes (2/23). Also, vascular invasion was found in the mesoesophagus. 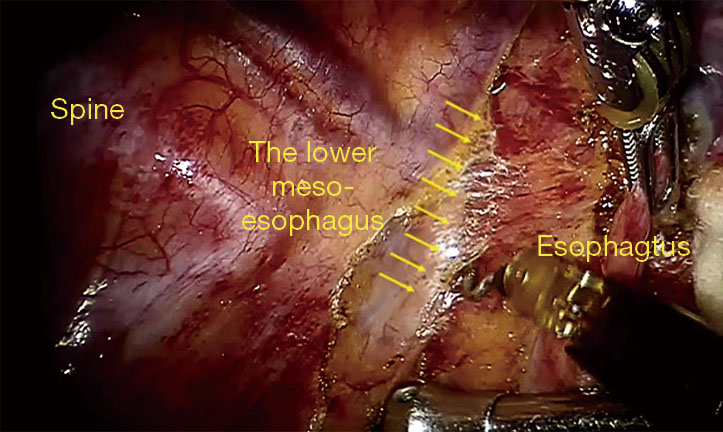 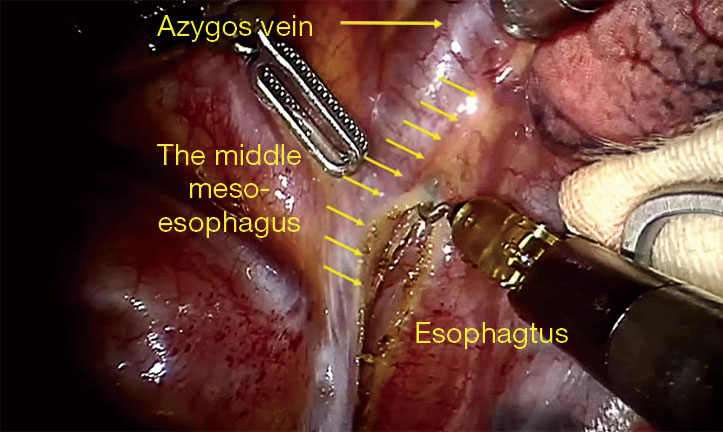 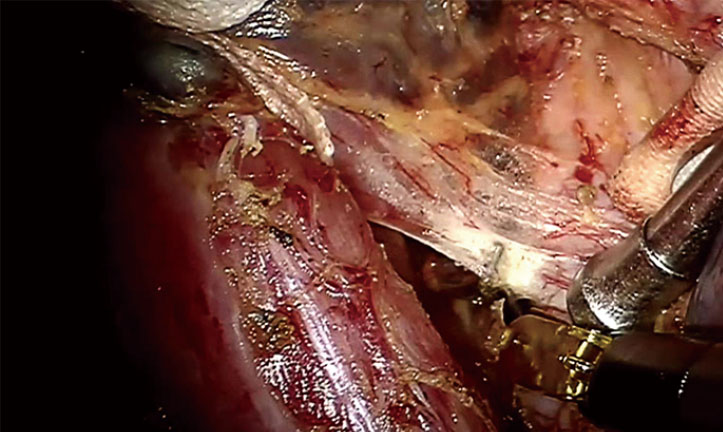 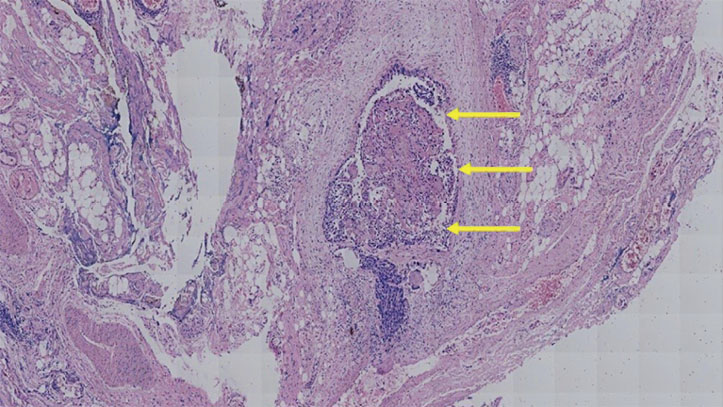 Figure 4 Vascular invasion was found in the mesoesophagus as shown by the arrows (HE, ×400).

The patient successfully operated and transferred to the general ward. Postoperative measures such as non-steroidal analgesic regimen, acid production by proton pump inhibitors, supplementation of daily water and electrolyte requirements by nutritional fluid, atomization of phlegm, telling to turn over and pat back, guiding correct cough and sputum to prevent postoperative pulmonary infection are our standard practices.

During the follow-up after operation, digital gastrointestinal angiography which was taken 1 week after surgery showed that the anastomotic stoma healed well, no obvious signs of exudation were found. No obvious leakage in the NGT, the contrast agent passed smoothly. Fluid diet could be taken 1 week after operation, and sutures out in 2 weeks after surgery. The surgical incision healed well, and there was no infection or wound dehiscence.

The entire operative video and follow-up can be viewed in Video 1.

Improving the long-term survival rate and quality of life of patients with esophageal cancer is the focus of research and exploration. The total mesolectal resection in the surgical of gastrointestinal tumors has achieved satisfactory results in recent study. At present, the meso-esophagus is considered to be the thin layer of connective tissue around the esophagus, containing esophageal vessels, lymph vessels and nodes and nerves (5). Our medical center had carried out a retrospective analysis about the 12 patients accepted the modified total meso-esophageal esophagectomy, founding that all the patients who received the modified surgery did not have some serious complications, such as postoperative massive hemorrhage, postoperative chylothorax, and conversion to open surgery. Therefore, this modified total meso-esophageal esophagectomy is safe and feasible. Besides, postoperative pathology found vascular invasion existing in the mesoesophagus in two patients of them (2/12). Therefore, the modified surgery might be not only more radical than traditional radical surgery, but also more consistent with the anatomical characteristics of esophageal cancer, which can be done with the esophageal cancer and corresponding overall regional lymph node en-block dissection, meet the longitudinal and transverse cutting edge of esophageal tumor, improve radical tumor resection, ensure the quality of the minimally invasive esophageal cancer surgery. However, there are still limitations in this method of surgery, the limitation of this operation method is that the related research is still retrospective, and there is a lack of evidence for more advanced prospective randomized controlled trials.

Conflicts of Interest: All authors have completed the ICMJE uniform disclosure form (available at http://dx.doi.org/10.21037/jovs.2020.03.04). MK serves as an unpaid editorial board member of Journal of Visualized Surgery from Jun 2019 to May 2021. The other authors have no conflicts of interest to declare.