Lung segmentectomy is an increasing topic in thoracic surgery. Either for ground glass lesion or at risk patient in purpose of lung sparing with anatomical resection and node harvest. The technology advances in imaging and surgical techniques are accompanying this rise as it offers pre-operative planning and per operative technical condition to perform a rigorous anatomical control and section of bronchial and vascular structure. The hand-wrist tool of the four-arm telemanipulation system gives the opportunity to the surgeon to realize open surgery approach and dissection. The benefit of minimal invasive surgery is well accepted and the debate between lobectomy or segmentectomy for less than two centimeter N0 lesion has shown equivalence in long term survival (1). Technical mastering of the tool and anatomical comprehension of patients anatomy are key points of these procedures setting.

We describe and present a video of a 66-year-old woman, heavy active smoker (40 packs per year) who was diagnosed with two suspected metachronous primary lung cancer stage 1 in the right lung (Video 1). The biggest lesion was a solid 17 mm nodule in the basal pyramid 3.6 SUV and the second one was in segment 3, centimetric and partially ground glass 1.4 SUV lesion. Regarding the N0 status and to avoid a right pneumonectomy for stage 1 multiple lesions, we considered performing a double segmentectomy of S3 and S7 to 10 with radical node harvest of the right lung using a 4-arm Da Vinci Xi system.

The robotic setting has been previously described (2,3). The port placement is shown in Figure 1. The same robotic setting is used whatever the procedure, as the same target zone are used either for hilum dissection or node harvest. 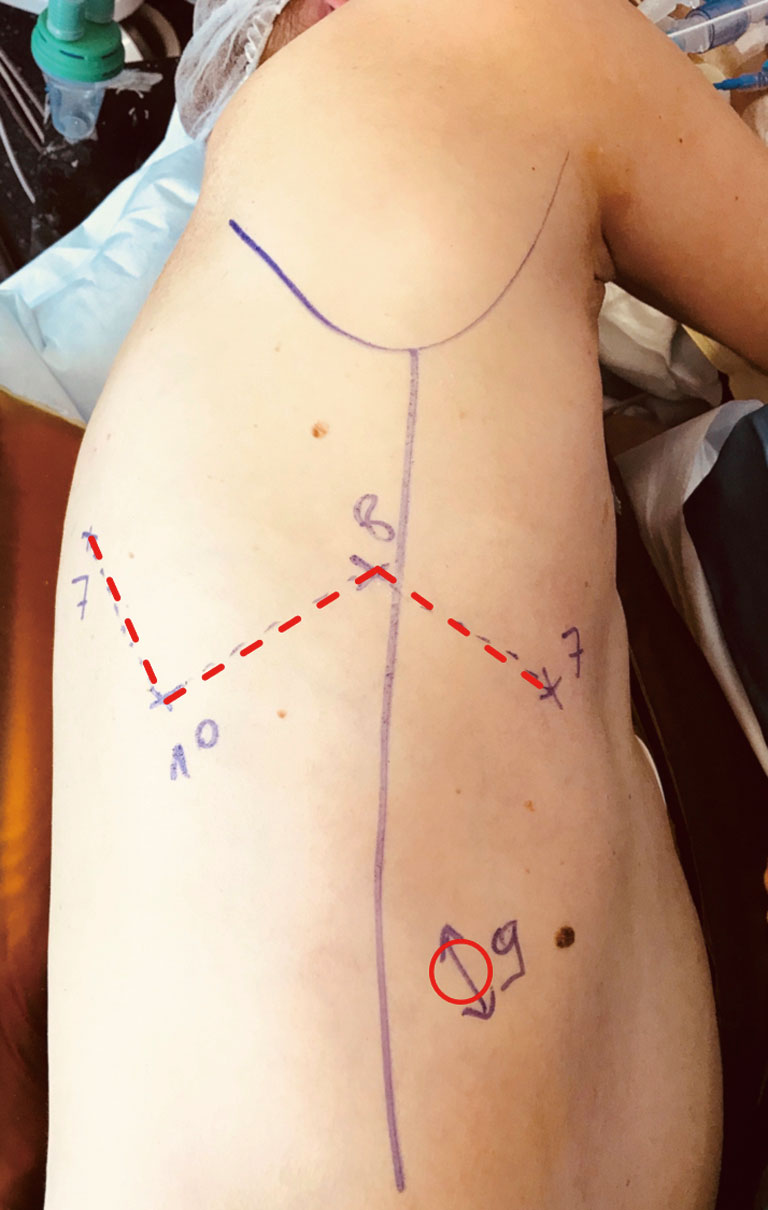 Figure 1 Port position for the right side approach, camera port in the 8th inter costal space (ICS), right hand in the 7th, left hand in the 10th and the third hand in the 7th with a decay of at least two fingers closer to the spine, the 15 mm port access is in the 9th ICS at the diaphragm insertion. The dot line shows the partial W shape of the setting.

In our technique, we do not use any utility incision. As the procedure is done with a preserved and closed chest we can use insufflation (low pressure 5 mmHg) to enhance lung deflation and also be almost autonomous from the console to realize the procedure. As for now, and for some technical and cost reasons we do not use the robotic stapling.

First, as shown in the video, the axes of stapling for such procedure come from anterior and posterior side. The robotic stapler requires a 12-mm port, meaning we would have to use two of them for both right and left hand ports. The posterior port might be harmful for the patient, especially in women with smaller intercostal spaces. Second, in France the cost of robotic stapler is not affordable compared to the other stapler. This part of the procedure is therefore delegated to the assistant. The voice control from the surgeon leads the action of the stapler using simple code adapted to the image frame: forward/backward, clockwise/anticlockwise, up/down, left/right. The instruments also help to control the movement, bending, placement and stabilization of the stapler. The bending of the stapler matters, as does the axis of entrance for safety and quality purpose. The axis of the instruments must always be adapted to the axis of anatomical structures and not the opposite to avoid the risk of tissue or vessels tear described by Decaluwe et al. for video assisted thoracic surgery (4).

The strategy of resection was to realize all vascular and bronchial sections or ligation of both segments and to open their inter-segmental plans at last, in a row, after indocyanine green (ICG) injection (Figure 2). ICG is one of the last technical advances accompanying the rise of sub-lobar resection. The first application in thoracic surgery was described in 2010 (5). Its use is spreading and varies from nodule detection, segmental plan definition and even sentinel node detection. For lung mapping, a recent phase 2 study showed that the oncologic margin is increased by ICG use for segmentectomies (6). Two recent reviews report various ICG doses. The first, from Matsuura et al. paper report from 0.25 to 3 mg/kg (7). Okusanya et al. report 5 papers on the use of ICG for inter-segmental plan identification, and the range dose used were from 3 to 5 mg/kg (8). They also mention that for safety reason, as some anaphylactic shock have been described, the higher dose must not exceed 5 mg/kg. Nevertheless, there is no consensus on the dose to inject. Cerfolio’s team describes the double use during a procedure. Firstly, for nodule detection, using a low dose injection through endobronchial navigation (0.5 mg) before surgery. And secondly, for lung mapping after segment dissection, then, they inject the rest of the bottle, that to say 9.5 mg (9,10). As the conditioning of the product is a 25 mg-bottled powder of ICG, in a simplification purpose, and after testing different doses, we have accepted a dose of 8mL for each patient, whatever the weight or sex, which means 20mg of ICG. A non-previously published detail that matters is the time of assessment of the plan after the injection (Figure 2). In our practice we have stated to wait 20 seconds with no scientific but empirical underlying. In fact, after a longer period, we have experienced some spreading of the product, especially due to lung manipulation, even as gentle as gauze pushing of the parenchyma. Moreover, cardiac output after few minutes washes out the product. We also advise to check this partial wash out of ICG at the end of the procedure to be sure of the venous patency on the remaining segments. Peripheral lung dystrophy impairs ICG diffusion as the concentration of vessels s lowered in those emphysematous sectors. Thus, the use of double check; ventilation and ICG perfusion, might increase ICG low vision in those patient and therefore must be avoided.

During such procedure, the frozen section of the lobar and inter-lobar nodes is mandatory to assess a N0 status. As shown on the video, the CT scan was revealing multiple nodes in 4R, 10, 11 and 12 (for each lobes) zones. For timing question, the radical node harvest of those zones was not shown in the video but was obviously done to confirm the N0 status. It is very important to avoid clinical upstaging for those patients as it appears to be a risk factor of cancer related death as reported by Nguyen et al. (1).

Our robotic setting and operative conduct is standardized and applied whatever the resection scheduled, making it simple and reproducible. The partial W setting of the robotic ports allows a visual and conflict less instruments control of the whole chest cavity target zones with a 30-degree camera. As stated in the video, the placement of the third arm is critical as its use is mandatory for advanced procedures. Its position is higher than the left hand port and at least two-finger width closer to the spine. Thus, no conflict is encountered between the two back instruments. The third hand is a key for exposition, as it stabilizes the visual field. Due to 10-time magnification and the heartbeat, movements in the chest are emphasized. As the vessel dissection is more advanced for those procedures, the exposure and non-direct lung stabilization are essential for a safe and controlled vascular dissection. The “manual” ligation of vessels is also a key point for safety concern, as the versatility of the hand-wrist instruments allows to respect the axis of the vessel whatever its direction, and for hard skills concern, as it warrants a routine realization of fundamental gesture for thoracic surgeon.

As a conclusion, mastering of the tool is mandatory for performing such advanced procedures. The more distal the dissection is the more “manual” targeting and ligation of vessels are required. Fluorescence imaging is the best tool so far to define an accurate inter-segmental plan after section of vascular and bronchial structures. Multiple segmentectomies is an interesting option for N0 patients with multiple ground glass opacities or less than 2 cm lesion in different lobe to avoid pneumonectomy.

The author would like to thank Gregory Lemoigne (GLM Prod) for the video editing.

Provenance and Peer Review: This article was commissioned by the Guest Editor (Jean-Marc Baste) for the series "Advancement in Robotic Assisted Thoracic Surgery" published in Journal of Visualized Surgery. This article has undergone external peer review.

Conflicts of Interest: The author has completed the ICMJE uniform disclosure form (available at http://dx.doi.org/10.21037/jovs.2020.03.02). The series “Advancement in Robotic Assisted Thoracic Surgery” was commissioned by the editorial office without any sponsorship or funding. MD reports personal fees from INTUITIVE SURGICAL, personal fees from MEDTRONIC, personal fees from JOHNSON AND JOHNSON, outside the submitted work.

Ethical Statement: The author is accountable for all aspects of the work in ensuring that questions related to the accuracy or integrity of any part of the work are appropriately investigated and resolved. Written informed consent was obtained from the patient for the publication of this review article and any accompanying images.