We were honored to hold the 36th Annual Conference of the Japanese Association for Chest Surgery (JACS) here in Osaka. This conference was very memorable for general thoracic surgeons in Osaka, because this is the first time that the JACS annual conference was held in our city. Although Osaka University is one of the leading institutes in Japan, Osaka had not previously hosted this annual conference.

The agenda of the presidential address is shown in Table 1. In this article, I mainly cover the first two subjects related to the history of the Department of Surgery of Osaka University; historical events in the field of general thoracic surgery, and clinical practice and research of the thymus, thymoma, and myasthenia gravis. 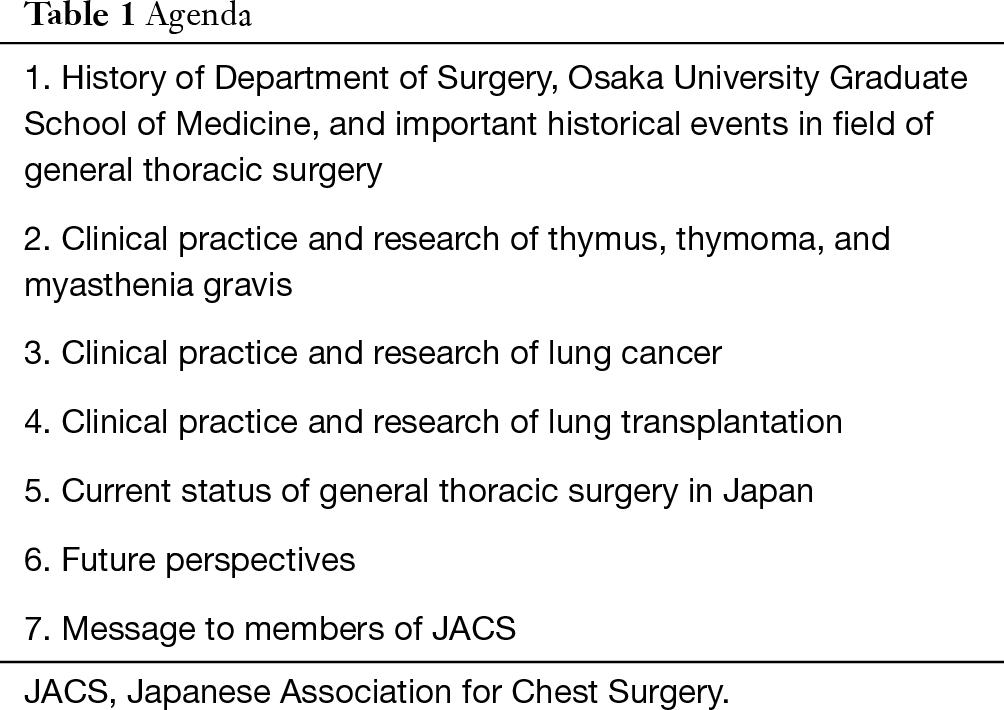 The history of the Department of Surgery is summarized in Figure 1. Osaka University School of Medicine was originally Osaka Prefectural Medical School, which was established in 1881. Dr. Kumagaya was invited from Tokyo Imperial University to be the chief of the Department of Surgery. During the time of Prof. Ogata, Dr. Härtel was invited from Germany in 1922 as a visiting professor and the system of two surgical departments was started. Photos of Prof. Fritz Härtel and his associate professor, Dr. Yoshio Ozawa, are shown in Figure 2. Osaka Imperial University was established in 1931, and then Osaka Prefectural Medical School was promoted and named Osaka Imperial University School of Medicine. Surgery subspecialties were finally united into a single department in 2007, which is now governed by 6 professors. 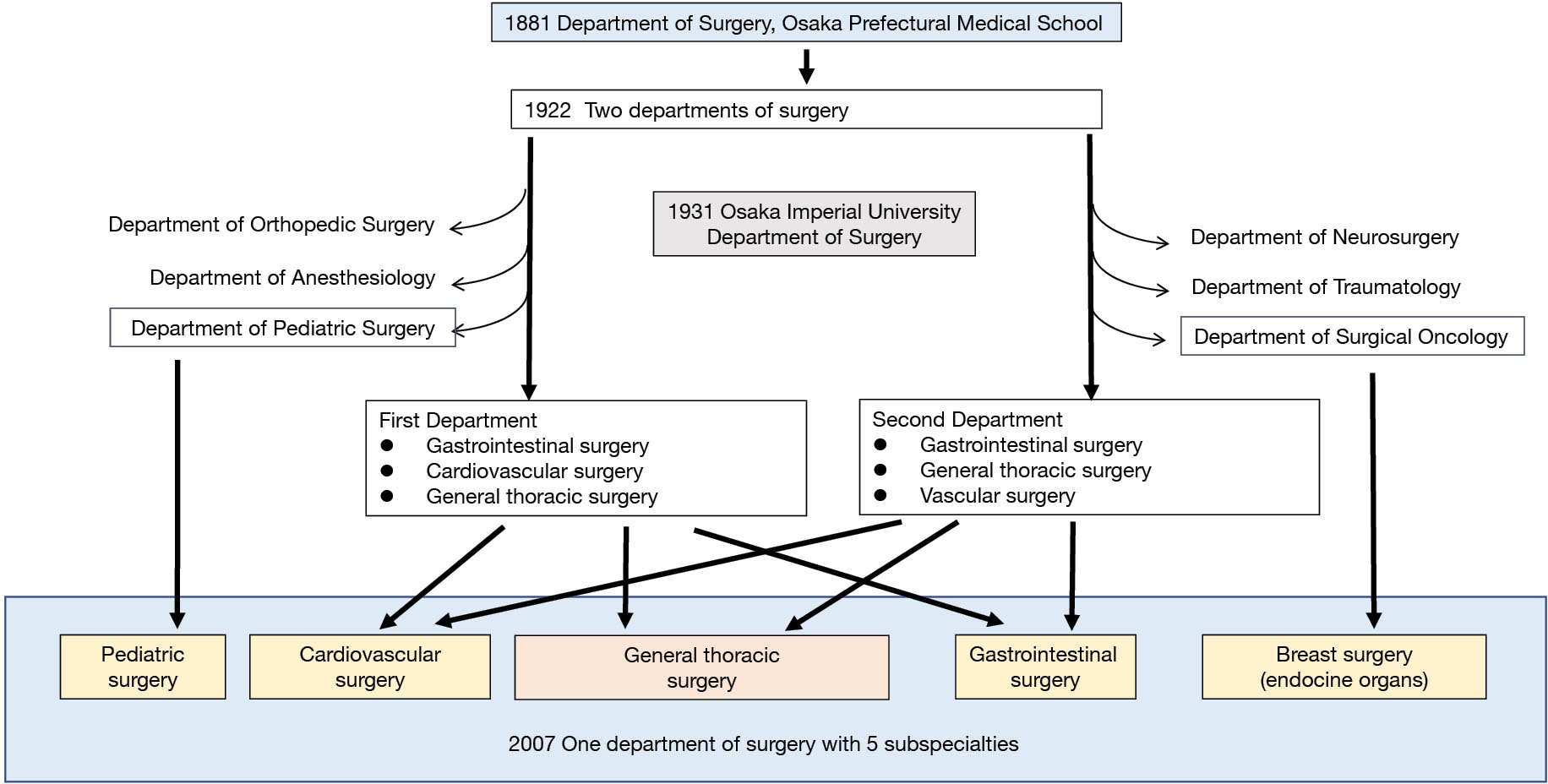 Figure 1 History of Department of Surgery in Osaka University. 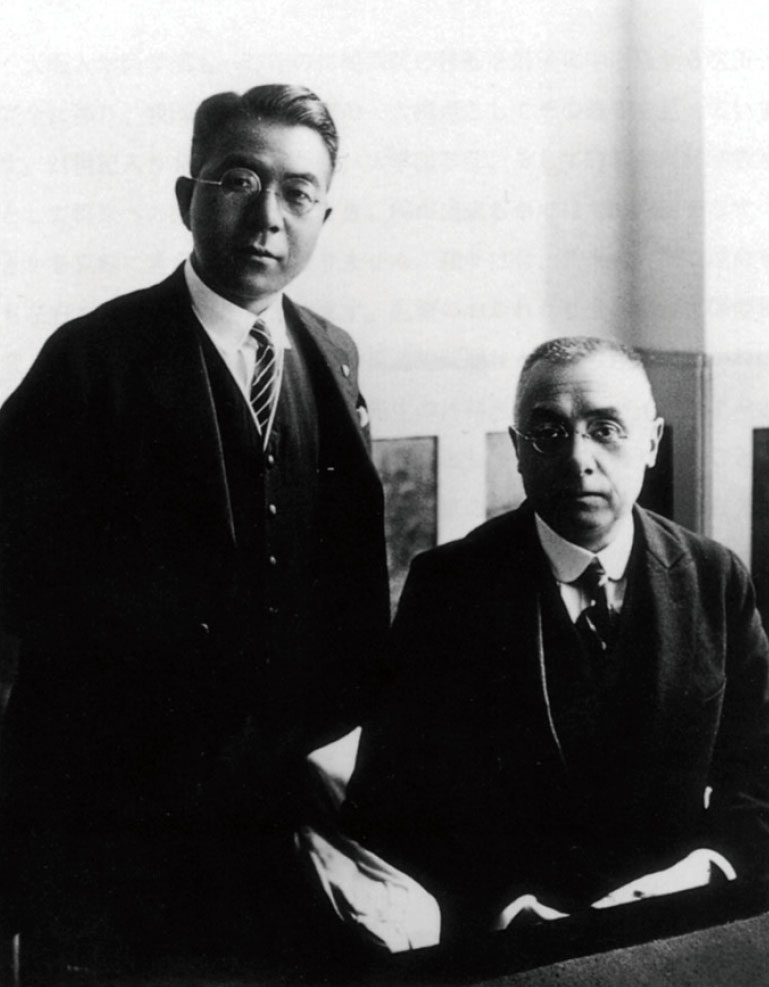 One of the outstanding historical achievements of Osaka University in the field of general thoracic surgery is a long-term survivor who underwent a left pneumonectomy for lung cancer performed by Prof. Ozawa in 1937, as shown in Figure 3 (1). This operation was conducted only 4 years after the first successful pneumonectomy for lung cancer by Prof. Graham in St. Louis.

The second outstanding achievement is resection of a tracheal tumor and reconstruction by end-to-end anastomosis of the trachea performed by Prof. Masazumi Maeda in 1969 (2). Prof. Maeda later moved to Kagawa Medical University, and contributed to developments in reconstruction surgery of the trachea and bronchus.

The third achievement is establishment of an extended thymectomy for myasthenia gravis by Prof. Akira Masaoka and Prof. Yasumasa Monden in 1979 (Figure 4) (3). 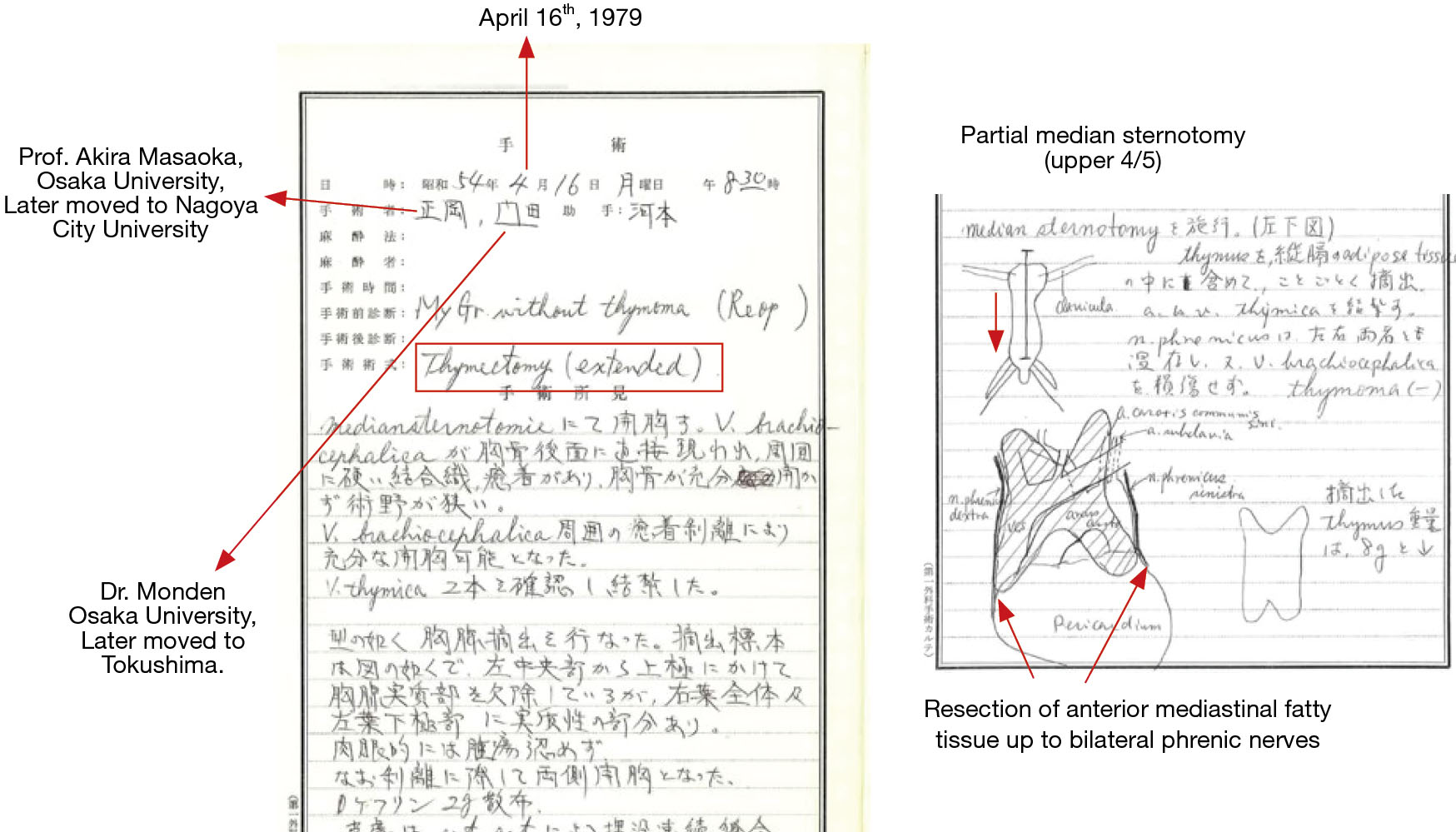 The fifth achievement is elucidation of the tolerance limit of pulmonary function in lung resection operations, which was provided by Prof. Nakahara, as summarized in Figure 6 (5). 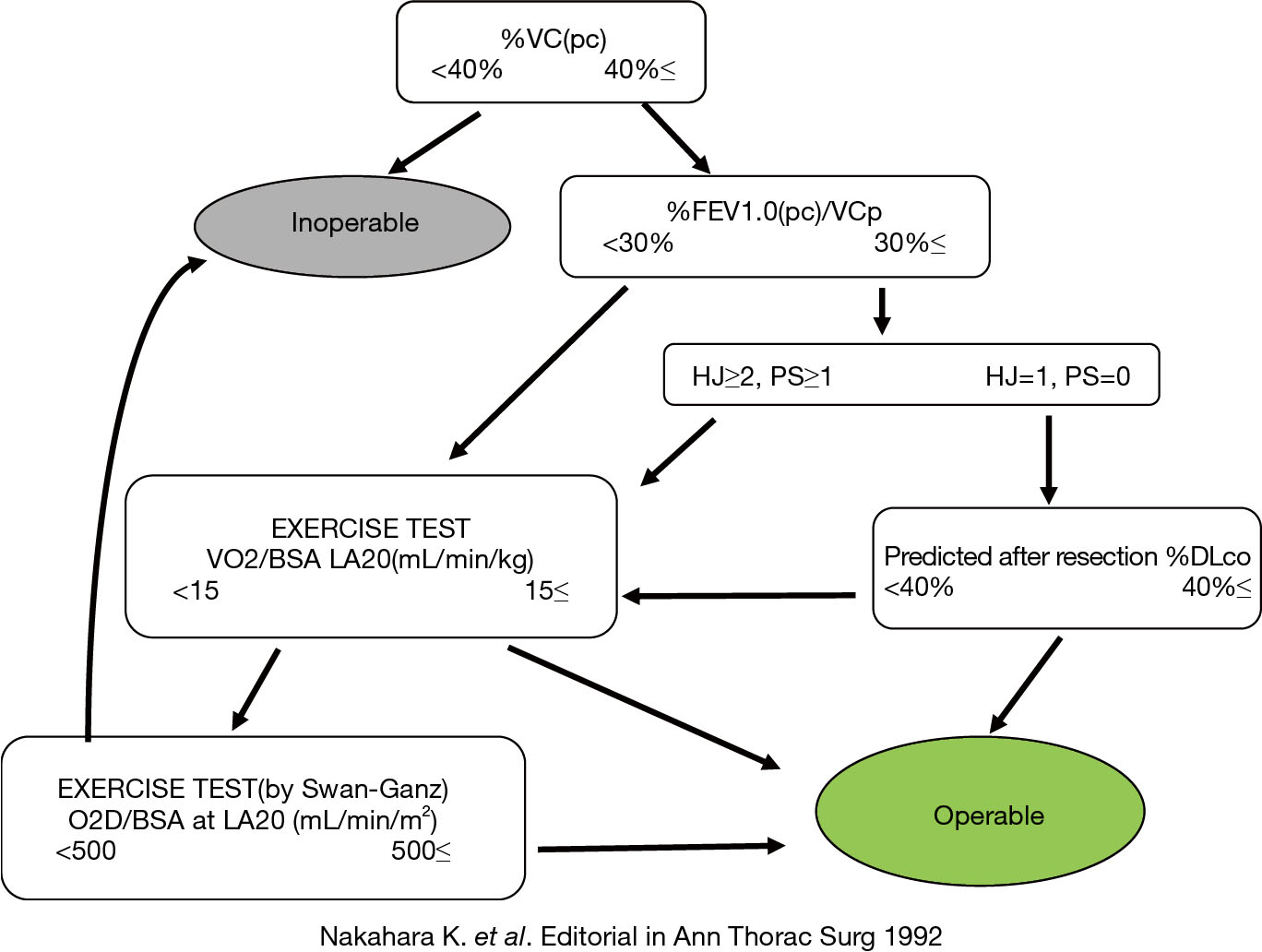 As shown by the above achievements, Osaka University has been a leading institution in regard to clinical practice, as well as research of thymic tumors and myasthenia gravis. One of the major interests among thoracic surgeons in the 1990s was development of less invasive surgery using thoracoscopy. Dr. Mitsunori Ohta and Dr. Hiroyuki Shiono established a bilateral VATS extended thymectomy with anterior chest wall lifting by use of an original rib hook (Figure 7) (6,7). Another important subject in that era was improvement of surgical outcomes for cases of locally advanced thymic epithelial tumors. Preoperative induction chemotherapy or chemoradiotherapy was introduced for locally advanced lung cancer in the late 1980s, and the same strategy was started in the 1990s for advanced stage thymoma and thymic carcinoma, especially when the great vessels were involved. A case of thymic carcinoma treated by induction chemo-radiotherapy followed by resection is presented in Figure 8. Tumor was dissected from the thick connective tissue around the ascending aorta successfully in this case.

Prof. Masaoka and colleagues established the Japanese Association for Research of the Thymus (JART), with the first conference held in 1982. The JART office is located in the Department of General Thoracic Surgery, Osaka University Graduate School of Medicine. JART compiled a nationwide database of thymic epithelial tumors under the leadership of Osaka University in 2012, with more than 3,000 cases collected from 32 leading institutes in Japan. Freedom from tumor death according to WHO histological classification is shown in Figure 9. Detailed analyses of the JART database have resulted in publication of 9 research manuscripts (8-16). This JART database also composed the major part of the IASLC database presented by UICC in 2017, which contributed to proposal of the novel TNM staging system for thymic epithelial tumors.

In the 1990s, Prof. Yoshitaka Fujii conducted immunological research, and studied T cell development in the normal thymus as well as the neoplastic environment inside thymomas. A thymoma seems to have functions of the thymic cortex, but not of the medulla. Finally, impairment regarding development of CD4+CD8− single positive T cells in thymomas relative to the reduced expression of HLA-DR by thymoma neoplastic epithelial cells as compared with that by normal thymic epithelial cells was found (17,18). Furthermore, CIITA expression was revealed to be significantly correlated with HLA-DR expression in thymoma neoplastic epithelial cells (19). Reduced expression of MHC molecules is considered to result in improper selection of the T cell repertoire, thus a thymoma might be defined as an acquired second thymus with impaired function. If that is true, a common association of autoimmunity can be partially explained in thymoma patients, while at the same time, a thymoma is thought to be a unique gift from nature for the study of immunology (Figure 10) (20).

Figure 10 Immunological function of thymoma and hypothesis of thymoma-associated autoimmunity.

Clinical implementation of a thymectomy procedure for treatment of myasthenia gravis remains to be elucidated. An abnormal abundance of germinal centers in the thymus of patients with myasthenia gravis is well known and abnormal B cell development has been observed in the thymus of such cases (21). Additionally, a reduction of the anti-acetylcholine receptor antibody titer was shown to be inversely correlated with number of B cells in the germinal center (22), suggesting that removal of the abundant germinal center in the thymus is an important factor of a thymectomy procedure (Figure 11) (23). 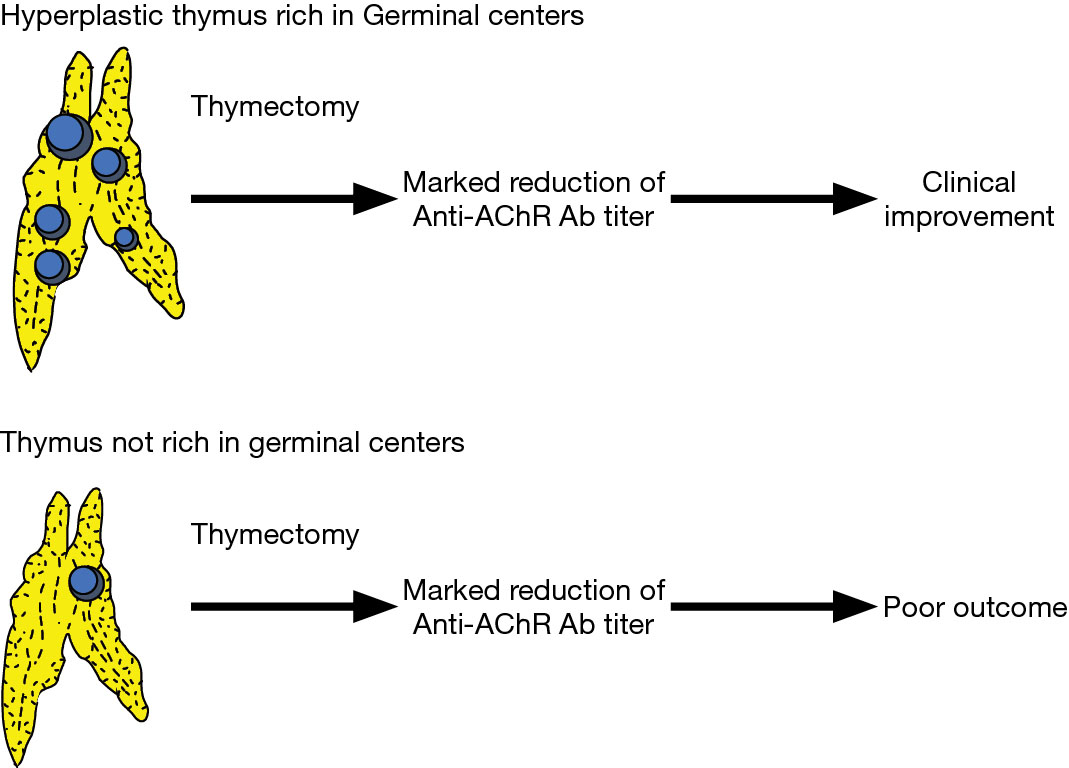 In addition to the achievements in research of thymic diseases noted above, basic oncological research has been conducted for lung cancer. The main focus points investigated in this field thus far are circulating cancer cells (24), cancer stem cells (25), epidermal-mesenchymal transition (EMT) (26), and the function of cancer-associated fibroblasts (CAF) (27). Figure 12 shows enhancement of EMT by IL-6 produced by CAF, suggesting the effectiveness of an anti-fibrosis drug for cancer treatment (28).

Several outstanding achievements have also been seen in the field of lung transplantation at our institution. The first lung transplantation from a brain-dead donor in Japan was successfully performed by Prof. Miyoshi and Prof. Matsuda in 2000, in which a left single lung was transplanted to a recipient with interstitial pneumonia at Osaka University Hospital. Presently, the patient is alive and well, 19 years after the transplantation. The right lung from the same donor was also successfully transplanted in a procedure performed at Tohoku University Hospital.

During the 30 years of the Heisei Era, 1989 to 2019, novel technologies including thoracoscopic surgery, robot-assisted thoracic surgery (RATS), and lung transplantation were successfully introduced, and the activities of general thoracic surgery were greatly expanded in Japan. Nevertheless, important challenges remain. Japan is facing a trend of a rapidly aging population and additional less invasive procedures will be required for surgical treatment of elderly patients. A uni-portal VATS procedure might be an important solution, though we are far behind several countries in Europe and Asia in developing an effective system. Although the variety of surgical treatments is increasing, the number of young doctors aimed at becoming a surgeon is decreasing and we must establish a system that enables surgeons to perform their work more efficiently. Work sharing with such staff as a nurse practitioner (NA) and physician assistant (PA) could be a helpful solution. Also, RATS is expected to help surgeons work for longer years thanks to the 3D enlarged view of the scope, performance of the operation in a sitting position, and protection from finger tremors.

I hope that technological innovations such as AI, IT, and robot technology will lead to further progress in the field of general thoracic surgery in this new Reiwa era.

Thank you for your kind attention.

Conflicts of Interest: The author has completed the ICMJE uniform disclosure form (available at http://dx.doi.org/10.21037/jovs.2020.01.02). The series dedicated to the 36th Annual Conference of Japanese Association for Chest Surgery (JACS) was commissioned by the editorial office without any funding or sponsorship. MO served as the unpaid Guest Editor of the series and serves as an unpaid editorial board member of Journal of Visualized Surgery from Aug 2018 to Jul 2020.

Ethical Statement: The author is accountable for all aspects of the work in ensuring that questions related to the accuracy or integrity of any part of the work are appropriately investigated and resolved.