Cystgastrostomy can be performed endoscopically or surgically (3). Surgical management is associated with decreased re-interventions but longer length of stay (4-6). Surgical management can be combined with cholecystectomy in many cases for patients with gallstone pancreatitis, further reducing the number of procedures needed (4). Minimally invasive approaches to cystgastrostomy can be performed either laparoscopically or robotically, but there are few descriptions of robotic approaches in the literature (7). We describe a robotic approach for transgastric pancreatic debridement and cystgastrostomy using the Da Vinci Xi® (Intuitive, Sunnyvale, CA, USA).

A 45-year-old male with a history of recurrent alcoholic pancreatitis presented with epigastric pain and fullness, decreased appetite and oral intake, and weight loss 8 weeks after an episode of necrotizing pancreatitis. His vital signs and laboratory values were unremarkable. A computed tomography (CT) scan of the abdomen and pelvis was performed that demonstrated a 6 cm × 7 cm area of WOPN (Figure 1). The patient underwent robotic transgastric pancreatic debridement and cystgastrostomy (Figure 2).

Here is a list of the equipment used during the procedure:

Four ports are used with the Da Vinci Xi® (Intuitive, Sunnyvale, CA, USA). The ports are placed in a similar position to robotic cholecystectomy (Figure 3). The port for arm 3 is placed through the umbilicus. Three additional ports are placed in line with this first port with one port on the patient’s left and two ports equally spaced on the patient’s right. The ports are spaced 8 cm apart. Arm 4 goes through the left-sided port, and arms 1 and 2 through the two right-sided ports. Arm 2, placed through the medial right-sided port, is used for camera placement and targeting. Two Caudie graspers are placed in arm 1 and 4. A monopolar scissors in placed in arm 3. An additional laparoscopic 12-mm trocar is placed between arms 3 and 4 for use of the suction irrigator, ultrasound probe, and laparoscopic bag.

A 60cm anterior gastrostomy is made with the monopolar scissors. The Caudie graspers are used to hold open the anterior gastrostomy. The laparoscopic ultrasound is used to localize the cyst or cavity. Monopolar scissors are used to make a small 1–2-cm incision under ultrasound guidance through the posterior stomach and cyst wall. Any fluid that is expressed is suctioned out (Figure 4). A cystgastrostomy between the posterior stomach wall and the cyst wall is then created with a robotic stapler. Typically, one or two loads of the green 45-mm stapler are used depending on the size of the cavity or cyst. Necrosectomy is then performed through this cystgastrostomy. A nasogastric tube is positioned through the cystgastrostomy into the cyst cavity. The anterior gastrostomy is then closed with a running absorbable, barbed suture (3-0 polydioxanone V-LocTM suture; Medtronic, Minneapolis, MN, USA). A second layer of 2-0 silk suture is used for double layer closure of the anterior gastrostomy. All necrotic material is collected and removed via a laparoscopic bag (Figure 4). A robotic cholecystectomy can be performed via the same ports in cases of gallstone pancreatitis.

The 12-mm laparoscopic port is closed with a 0-vicryl UR-6 stitch (Ethicon, Somerville, NJ, USA). The procedure is visually depicted in Figure 5. 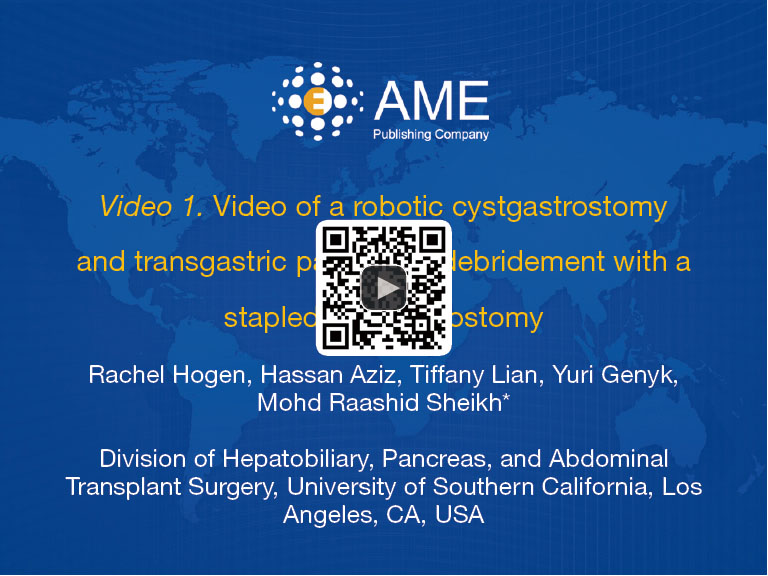 The nasogastric tube is left in place post-operatively and removed on post-operative day (POD) 1 with subsequent advancement of diet. An enhanced recovery protocol is employed with anticipation for discharge by POD 1–2. Patients are routinely seen in the clinic 2 weeks post-operatively, and repeat imaging is only obtained for recurrence of symptoms or signs of infection.

Robotic cystgastrostomy is a safe and feasible option for patients with symptomatic pancreatic pseudocysts and WOPN that do not resolve spontaneously. We recommend robotic cystgastrostomy for patients with extensive pancreatic necrosis that is not amenable to endoscopic retrieval or may require multiple endoscopic interventions. In addition, the range of motion and articulation of the robotic arms allows simultaneous robotic cholecystectomy and cystgastrostomy without repositioning of the ports, which is sometimes necessary in laparoscopic surgery.

In this paper, we describe a robotic cystgastrostomy using a Da Vinci Xi® (Intuitive, Sunnyvale, CA, USA) and a robotic stapler. Caudie graspers are used for retracting the stomach and debriding the pancreas as they have the gentlest grip strength of the robotic graspers, minimizing trauma to the tissues. The stapler allows for faster operating time and has not been described with the robotic approach previously. We continue to use an additional 12-mm laparoscopic port. This allows us to use a laparoscopic intra-operative ultrasound probe, laparoscopic bag for removal of necrotic debris, and the suction irrigator without removal of any of the robotic arms.

The robotic approach lends itself to an excellent pancreatic debridement making it an excellent tool to treat WOPN. The articulation of the instruments and superiority of the camera with the ability to zoom into the cavity allow more thorough investigation and debridement of the pancreas in cases of WOPN. In addition, surgical approaches have been associated with fewer interventions compared to endoscopic necrosectomy in multiple studies (4-6). Some randomized controlled trials have demonstrated equivalent efficacy between laparoscopic and endoscopic drainage for pancreatic pseudocysts and WOPN in collections with less than 30% debris; however, endoscopic and robotic cystgastrostomy have never been compared, and the benefit of the robot is likely in cases with WOPN and more extensive debris (9,10). Future studies should be directed at comparing robotic and endoscopic cystgastrostomy with transgastric debridement in cases of WOPN, particularly in cases with more extensive pancreatic necrosis. While WOPN can also be debrided retroperitoneally, this usually requires pre-existing drains and risks the development of pancreatic fistula. Thus, the robotic approach offers a minimally invasive approach with the ability for a thorough debridement that does not require drains.

The robotic approach allows for a combined transgastric pancreatic necrosectomy and cystgastrostomy in patients with WOPN from pancreatitis. The technique described uses intra-operative ultrasound to accurately localize the cavity and a stapled cystgastrostomy to hasten operative time. A similar technique can be used to treat pancreatic pseudocyst.