Lung segmentectomy has become a common surgical procedure in thoracic surgery. It is an alternative treatment for primary lung cancer, especially for small-sized tumors or for patients unfit to undergo a standard lobectomy and who thus require sublobar resection. Although segmentectomy can preserve lung function, its non-inferiority regarding the oncological outcome is still a matter of debate (1-4). Surgical approaches such as video-assisted thoracoscopic surgery (VATS) and robotic surgery have also been reported for segmentectomy (5-8). In addition to primary lung cancer, segmentectomy is performed for metastatic lung lesions arising from other malignancies such as colon cancer (9,10). Reports have also described the use of segmentectomy for the treatment of non-malignant diseases, including inflammatory pseudotumors, pulmonary arteriovenous fistulas, congenital bronchial atresia, intralobar pulmonary sequestration, and severe hemoptysis (11-15).

Compared with lobectomy, anatomical segmentectomy requires a thorough assessment of each patient’s thoracic anatomy, notably of the peripheral intersegmental veins. Thoracic surgeons thus must be familiar with the branching patterns of pulmonary vessels and bronchi. However, this remains a challenge because pulmonary anatomy has numerous variations and anomalies. Fortunately, advances in multidetector-row computed tomography (MDCT) and volume-rendering reconstruction software have allowed the reconstruction of three-dimensional (3D) images (16). 3D-CT imaging is a powerful tool for thoracic surgeons to determine pulmonary anatomy in a more intuitive manner when compared with conventional CT images. 3D-CT images help surgeons better understand the pulmonary anatomy of each patient before and during surgical procedures (17-21).

However, there are still technical and anatomical pitfalls that must be overcome to achieve a safe and precise segmentectomy. Here, we present our method for VATS segmentectomy based on 3D-CT angiography and bronchography (3D-CTAB), along with a review of the literature.

Our method for 3D-CTAB image reconstruction was previously reported (22). Briefly, we use 64-channel MDCT (SOMATOM Definition Flash; Siemens Healthcare, Berlin, Germany) for scanning. A total of 35 mL of contrast agent is mechanically injected at a rate of 5 mL/s, followed by the immediate injection of 20 mL of saline. Volume data from both the arterial and venous phases are transferred to a workstation running volume-rendering reconstruction software (Ziostation2; Ziosoft, Tokyo, Japan). The data are then converted into a 3D-CT angiographic format. The 3D reconstruction of the bronchi uses morphology-based two-dimensional segmentation of axial images, followed by the manual selection of segments. 3D images are first processed by radiology technicians and subsequently validated by thoracic surgeons (Figure 1).

Cases excluded from 3D-CTAB reconstruction are patients who were unable to undergo intravenous injection of a contrast agent (e.g., due to low renal function or because of an allergy to the substance). Furthermore, bronchi or vessels could not be clearly detected in some cases, due to obstruction by enlarged lymph nodes or centrally located tumors.

We reconstruct 3D-CTAB images for all lung cancer patients who undergo segmentectomy in order to classify the patient’s anatomical pattern, verify any anatomical anomalies, plan the surgical procedure, and evaluate surgical margins. The anatomical patterns are diverse, and the spatial configuration of the arteries, veins, and bronchi makes the entire picture even more difficult to understand. 3D-CTAB allows a 360-degree view of lung anatomy, and leads to rapid and intuitive recognition of individual anatomical patterns (22,26,27). By recognizing the branching pattern and spatial configuration of a patient’s anatomy, 3D-CTAB allows the surgeon to plan anatomical segmentectomy preoperatively by deciding which intersegmental veins should be used as landmarks, which artery/vein/bronchi should be dissected, and in what order. It is also valuable when evaluating surgical margins and planning surgery for impalpable or centrally located tumors.

Classification of anatomy and planning of the procedure

When planning anatomical segmentectomy, such arteries, veins, and bronchi must be preoperatively assessed because the procedure for anatomical segmentectomy differs according to the branching pattern. In particular, veins should be analyzed up to more peripheral branches; that is, intersegmental veins (V1b, V2a, and V2c for the RUL). Intersegmental veins are landmarks during segmentectomy because they indicate the boundaries of the targeted lung segment. Previous reports have described the benefits of 3D angiography for recognizing these intersegmental veins (17,30). For example, when planning S2 or S3 segmentectomy, V2c is the segmental vein separating S2 and S3. For patients with an “anterior with central” or “central” type pattern, V2c drains into the central vein; thus, the central vein should be denuded from the hilum to identify V2c. On the other hand, for patients with an “anterior” type pattern, V2c drains into the anterior vein; thus, the anterior vein should be denuded to identify V2c. The surgeon should especially recognize the branching pattern of these intersegmental veins and identify which vein should be used as a landmark and at what level the veins should be dissected. We previously proposed a simplified vein model of the RUL to aid surgeons in planning RUL segmentectomy (26). 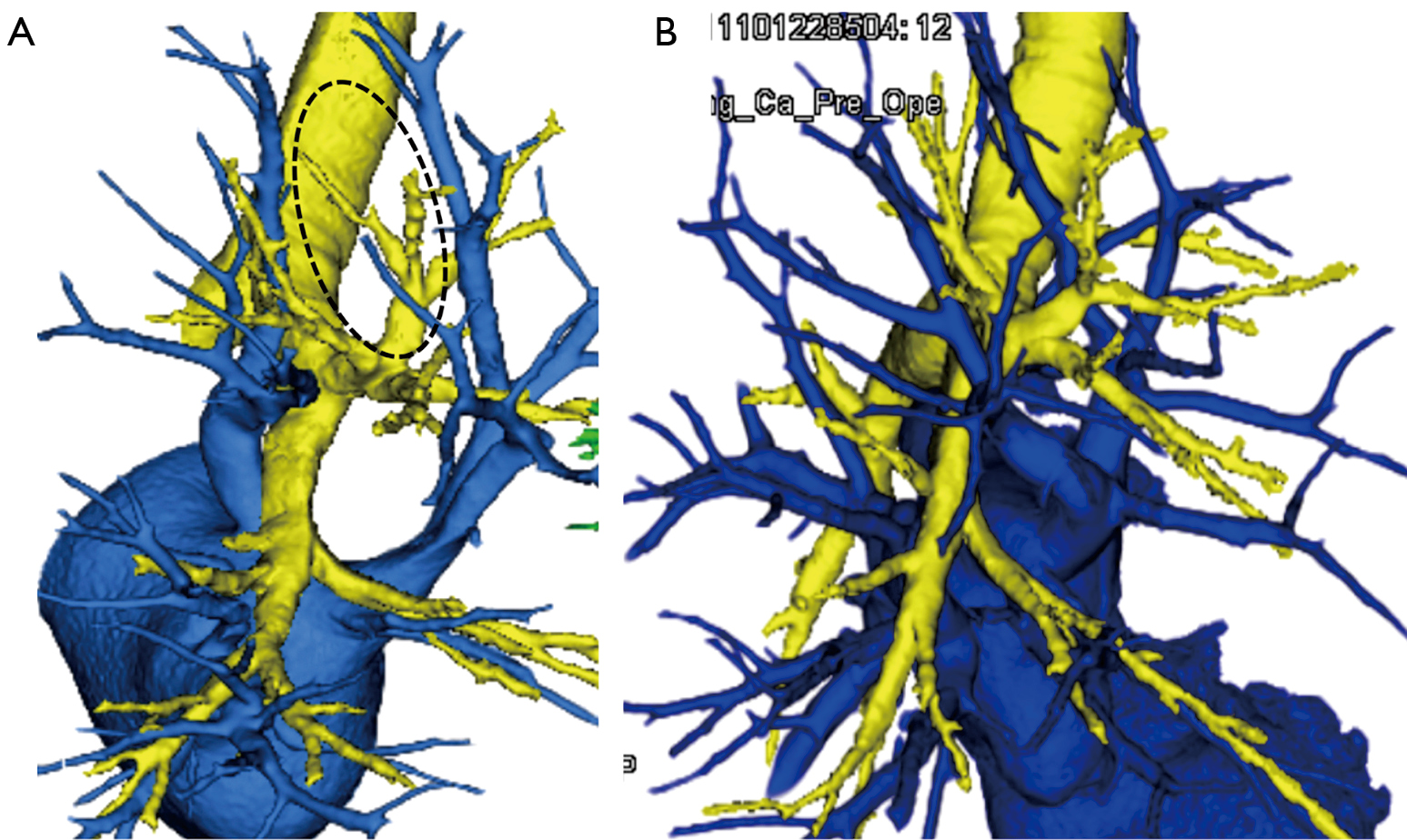 Figure 2 Identification of cases unfit for anatomical segmentectomy. (A) A case with no intersegmental vein between S1 and S3 (the dotted area shows a defect in V2a); (B) a case with complex intersegmental veins that cross over segments and do not mark the boundaries of segments.

Evaluation of the surgical margin

3D-CTAB is also used to assess the surgical margin between the tumor and planned resection line. We measure the distance between the edge of the tumor and intersegmental veins using conventional and 3D-CT images (17). A sufficient surgical margin is essential to prevent loco-regional recurrence, especially for limited resections such as segmentectomy. Previous reports have described the utility of the preoperative measurement of a “virtual safety margin” with 3D-CT (32,33).

Another benefit of planning segmentectomy with 3D-CTAB is its utility for small impalpable and centrally located tumors. If we can preoperatively confirm by 3D-CTAB that the tumor is confined to a single segment with adequate surgical margins, we can theoretically and confidently resect the lesion by performing anatomical segmentectomy, using intersegmental veins as landmarks.

The intraoperative identification of veins, arteries, and bronchi is imperative for safe anatomical segmentectomy. 3D-CTAB allows the spatial presentation of vessels and bronchi, and it guides us through the surgical procedure. Spatial recognition is especially useful for atypical or “difficult” segmentectomies (20). We always place the 3D-CTAB image next to the thoracoscopic monitor during surgery and constantly confirm that the actual anatomy correlates with the 3D-CTAB images (Figure 3). Intraoperative discussion between surgeons can easily take place whenever there is a possible misconception of the anatomy. 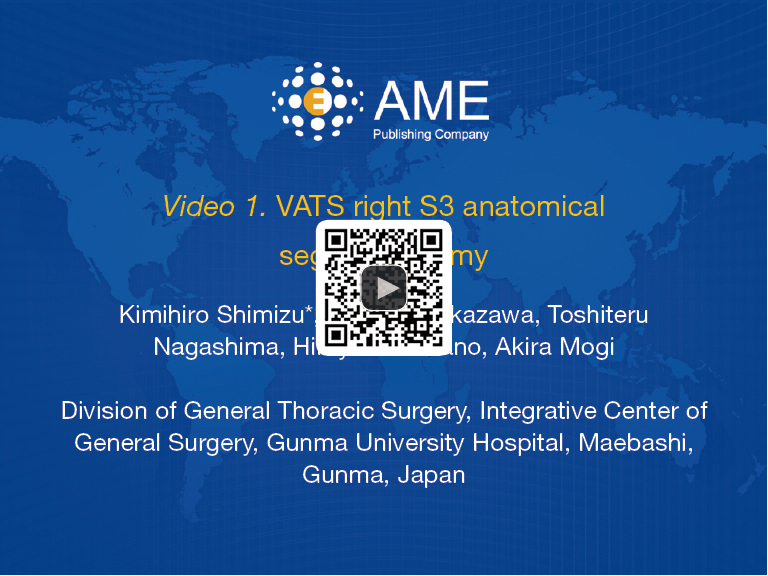 Figure 4 VATS right S3 anatomical segmentectomy (34). Presentation of S3 segmentectomy. The branching pattern was “anterior with central (Ib)” type. First, we identify the branches of the superior pulmonary vein. We denude the central vein and identify the intersegmental V2c vein. We then denude the anterior vein and identify the intersegmental V1b vein. We next dissect the segmental A3 artery, selectively inflate S3 via B3, and create the demarcation line. We dissect the central part and then the peripheral part of the intersegmental plane. We dissect the remaining lung parenchyma by using bipolar sealing system and finally extract the S3 segment. VATS, video-assisted thoracoscopic surgery. Available online: http://www.asvide.com/articles/1571

Identification of the central part of the intersegmental plane

Interestingly, the introduction of VATS surgery and advances in the quality of thoracoscopes have led to high-definition and magnified images of anatomical structures. We have noticed during VATS segmentectomy that intersegmental planes can be visualized when denuding intersegmental veins at the hilum (Figure 5). 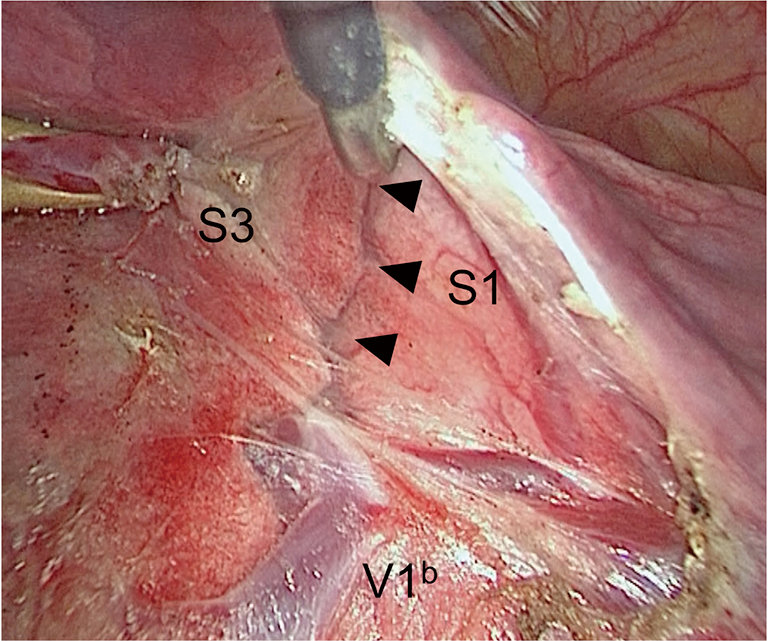 Identification of the peripheral part of the intersegmental plane 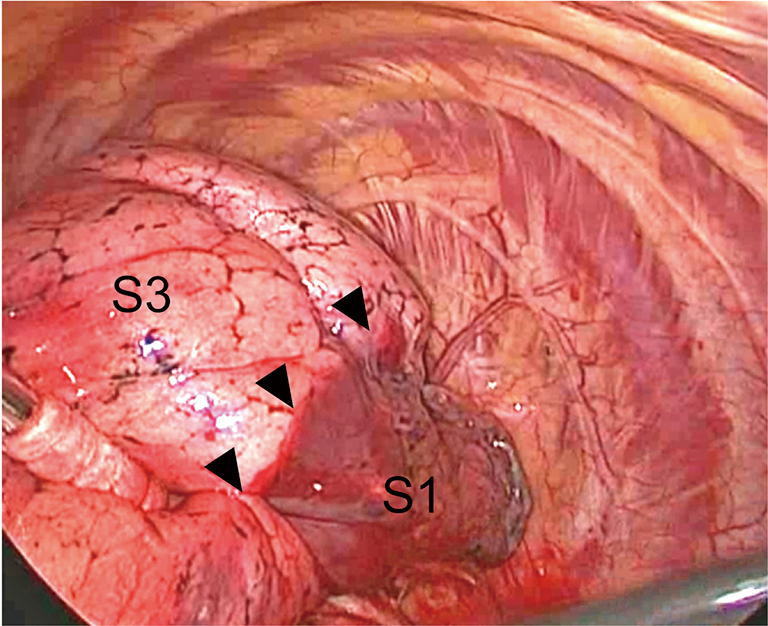 Dissection of the intersegmental plane 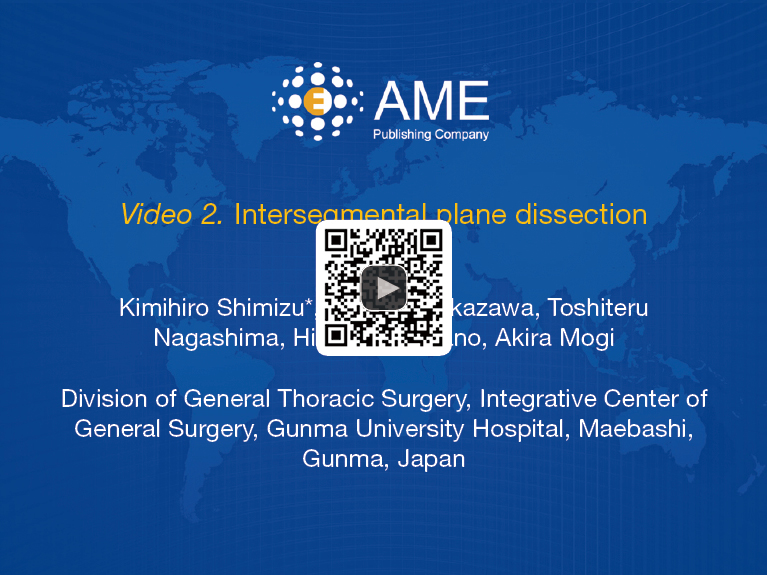 Role of members of our multi-disciplinary team

In anatomical segmentectomy guided by 3D-CTAB, the key members of the multi-disciplinary team includes the radiology technician, assistant surgeon, assistant holding the thoracoscope (usually a junior surgeon in training), and anesthesiologist. The role of the radiology technician is essential for adequate CT scanning and the processing of initial 3D-CTAB images. The two assistants participating in the anatomical segmentectomy will check the 3D-CTAB images along with the main surgeon and discuss the surgical procedure before surgery. 3D-CT has the additional benefits of educating junior surgeons, enabling them to experience the virtual operative view seen through a thoracoscope, and allowing the simulation of virtual surgical procedures before surgery (50). The role of the anesthesiologist is to inflate the targeted segment selectively using bronchofiberscopic jet ventilation, thus creating a demarcation line. Surgeons also verify from the surgical field that the bronchofiber is inserted into the appropriate bronchus before it is inflated by the anesthesiologist.

Recognition of anatomy based on 3D-CTAB is essential for safe and precise anatomical segmentectomy. It allows the surgeon to be guided in all steps of the procedure: (I) classification of individual anatomical patterns; (II) identification of anomalies; (III) identification of unsuitable cases for segmentectomy; (IV) preoperative simulation of surgical steps; and (V) intraoperative navigation for veins, arteries, and bronchi.

Although access to 3D-CTAB images in all patients undergoing VATS segmentectomy would be ideal, we believe that even if surgeons only have access to conventional CT images, knowledge of anatomical patterns and a repertoire of 3D-CTAB images can help surgeons classify the patient in front of them into a specific category, and thus enable the procedure to be simulated.