A DOCUMENTARY recording how a new approach to thoracic surgery has changed people’s lifes premiered in China at the University of Hong Kong Shenzhen Hospital on Friday 20th of March with the surgeon who created the technique and the Hollywood-nominated director present (Figure 1). “This is Life” depicts how Diego Gonzalez Rivas, the Associate Editor of Journal of Visualized Surgery, who became the first in the world to perform single port thoracoscopic surgery in 2010, changed his patients’ lives in the four years following the creation of the technique (Figure 2). Thoracic surgery is performed mainly to remove part of the lung for lung cancer sufferers. 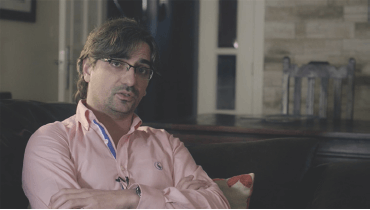 The movie was directed by Daniel Lopez, and it was recorded in different countries such as Emirates, UK, Poland, Spain, Russia or China. In the movie we can see how Dr Gonzalez Rivas travel around the world teaching the uniportal VATS technique. Dani Lopez met Rivas in 2010, a few months after his ex-wife died of lung cancer at 29. Lopez try to show patients that the option of surgery exists and that it could give some of them a second chance at life. During the procedure, one very small (3cm to 4cm) incision is made, instead of more conventional video-assisted thoracic surgery (VATS) or traditional open surgery. In comparison to VATS, which utilizes multiple incisions, Rivas’ method shows that less really is more. There is less pain, less recovery time and less scarring for patients with no sacrifice in quality. The movie also shows the story of a patient operated by this minimally invasive technique and with no intubation, representing the less invasive approach to operate lung cancer. The cultural aspects of each country are included as a highlighted content of the movie.

Standard three-port VATS techniques use a cross-body approach, as ports are spread in a triangular configuration. Surgeons then work within these angles to position their instruments to perform lung resections. Unfortunately this configuration sacrifices the visibility made available with traditional techniques, which use one very large (10 to 20 cm) incision. Three-port approaches also force surgeons into anatomically uncomfortable positions for the duration of the surgery. Surgeons are forced to contort their bodies and adopt an uncomfortably wide stance to be able to easily manipulate all of the instruments simultaneously. These challenges led Rivas to conceive of and develop single-port surgery for major pulmonary resections. To the surprise of the thoracic surgery community, the single-port approach quells many of the difficulties. By inserting all of the instruments in the same port of the camera, surgeons gain visibility and maneuverability without sacrificing ergonomics.

The movie could be enjoyed at:

Opinions and comments from world experts on the journey: https://amepc.wistia.com/medias/gy9keirars.