Dr. Charles T. Bakhos is an Associate Professor in the Department of Thoracic Medicine and Surgery at Temple University Hospital (Lewis Katz School of Medicine).

Dr. Bakhos specializes in minimally invasive thoracic surgery, including both thoracoscopic and robotic approaches to benign and malignant diseases of the lung, mediastinum, chest wall, diaphragm and esophagus. He has special expertise in tracheal surgery for benign conditions of the airway, particularly stenosis and malacia, and has a particular interest in surgical education and simulation.

Dr. Abbas E. Abbas is Professor and Chief of Thoracic Surgery at Temple University Hospital and Fox Chase Cancer Center in Philadelphia, Pennsylvania. Since completing his training he has held positions at several US institutions including Ohio State University, Ochsner Clinic, Tulane University, Louisiana State University and currently Temple University. In addition he is one of the earliest adopters of robotic thoracic surgery and since 2003 has developed extensive expertise in robotic surgery for mediastinal, esophageal and lung disease.

During his career Dr. Abbas has held several professional leadership positions including presidency of the Eastern Cardiothoracic Surgical Society in 2018 and Executive Board memberships in numerous societies including the American Association for Thoracic Surgeons, the American Lung Association, the Eastern Cardiothoracic Surgical Society and the Society of Robotic Surgery. He has authored and edited numerous publications including scientific articles, review articles, Books and Chapters. He is a frequent speaker at major scientific meetings and has collaborated with many international investigators in promoting better and safer thoracic surgery.

Disclosure:
The series “Tracheobronchoplasty” was commissioned by the editorial office, Journal of Visualized Surgery without any sponsorship or funding. Charles T. Bakhos and Abbas E. Abbas are serving as the unpaid Guest Editors for the series. 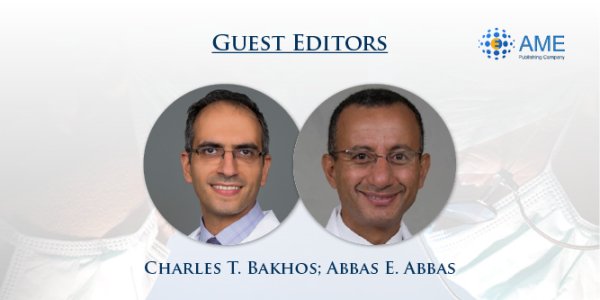