Lobectomy via video-assisted thoracoscopic surgery (VATS) is steadily becoming more commonplace and has been shown to be associated with at least equivalent postoperative outcomes, as well as equivalent oncologic outcomes in early-stage lung cancer (1). Concerns regarding oncologic effectiveness are focused on the ability to achieve complete lymph node (LN) dissection using this minimally invasive technique (2). Effective VATS lymphadenectomy depends on a comprehensive understanding of the anatomy, including the correct nomenclature that was defined by staging (3) and treatment guidelines (4).

Difficulties in lymphadenectomy were the most popular reasons of conversions from VATS to thoracotomy (5). In this report, we would provide comprehensive surgical techniques on the management of complicate hilar or interlobar lymphadenectomy via VATS.

A 65-year-old man with pulmonary adenocarcinoma (cT2aN1M0) underwent a left upper lobectomy with VATS. For VATS, 4th and 8th intercostal incisions were adopted. Enlarged hilar LN was met when left upper pulmonary vein (PV) was dissected (Figure 1). By retracting the surrounding fatty tissue of LN, space between hilar LN and PV was exposed with electric hook and suction. Delicate dissection technique was used to avoid injury to the upper PV before the enlarged hilar LN was enblock removed. 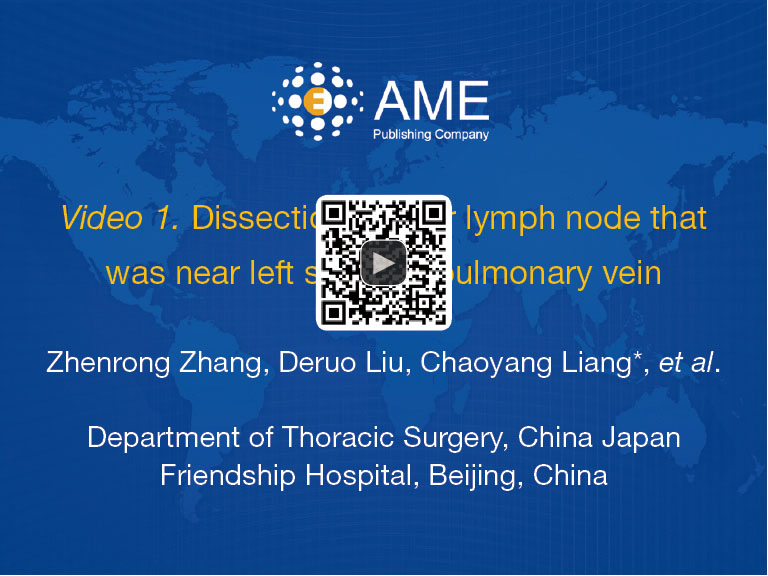 Figure 1 Dissection of hilar lymph node that was near left superior pulmonary vein (6). To expose the superior vein of left lung, hilar lymph node (LN) on the left side was dissected with suction and electric hook. By retracting the surrounding fatty tissue of LN, space between hilar LN and pulmonary vein (PV) was exposed. Available online: http://www.asvide.com/articles/774

A 71-year-old woman with pulmonary adenocarcinoma (cT1bN0M0) also underwent a left upper lobectomy with VATS (Figure 2). 4th and 8th intercostal incisions were adopted same as before. Enlarged interlobar LN was met when apical pulmonary artery (PA) was dissected. With suction and electric hook, the enlarged LN was pushed towards to the distal terminal of artery. Endostapler (Endoscopic Linear Cutters and Reloads, ATW45) was used after space between PA and apical branches were exposed. 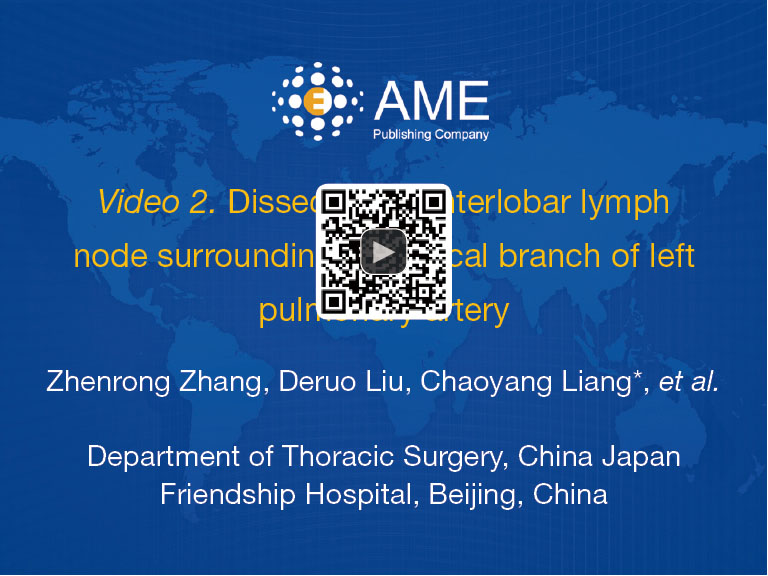 Various techniques have been adapted for lymphadenectomy with VATS, in addition to the improvements of VATS technique and instruments. VATS lymphadenectomy is equivalent to dissection via thoracotomy when performed by experienced surgeons. While LN interference is one of the most important factors affecting the conversion of VATS lobectomy to open thoracotomy (8,9). Enlarged LN that could obscure adjacent anatomic structures, and increase the difficulty in endoscopic maneuver might be met during dissection of vessels or bronchus. Usually the enlarged LN should be removed first to facilitate this procedure. Thoracic surgeons should keep in mind that to handle the sophisticated LN situation could be a tedious and rough job.

Some LNs are quite hard, and closely adherent to the peripheral vessels and bronchus, easily met with patients had prior tuberculosis or others inflammation. In this circumstance, the surrounding tissue of LN could be clamped to help retracting interlobar LN away from PA. Sharp dissection technique was used to dissect the LN towards the distal end to expose the interspace. While if the endostapler could not get through the space, the hem-o-lok might be used as an alternate. After two hem-o-loks were placed on the proximal part of artery, and one on the distal part, the branches were dissected. Also breaking the hard core of LN with suitable forceps before the dissection could be helpful for separating the LN from peripheral tissue.

While sometimes it might be impossible to enblock dissect the hilar or interlobar LN to expose the space between PA and its branches, as the LN adhered to the artery tightly and no further space could be exposed. Then interoperative LN biopsy should be recommended before dissection. With negative ice pathological result, the LN could be dissected sharply with major part including hard core removed, and only the outer membrane of the LN that tightly adhered was retained. Then relative vessel branch or bronchus could be dissected either by endostapler or hum-o-lock.

Lymphadenectomy is a crucial element of staging for early stage non-small cell lung cancer patients. During VATS lobectomy, lymphadenectomy must be performed safely and effectively, with oncologic results comparable with those of open procedures.

We do not have any relevant financial interests, relationships, or financial conflicts in the past and for the future.

Informed Consent: Written informed consent was obtained from the patient. A copy of the written consent is available for review by the Editor-in-Chief of this journal.