The left lower paratracheal (4L) lymph nodes are important components of the lymphatic pathway of the left lung (1-3). Several recent retrospective studies found that 4L lymph node dissection was associated with favorable survival outcomes in patients with left-sided lung cancer (4,5). However, surgeons do not always dissect 4L lymph nodes because dissecting these nodes increases the possibility of left recurrent nerve damage. Station 4L lymph node dissection is more difficult than lymphadenectomy of other stations because of the different anatomic configurations of the aortic arch, pulmonary artery, and left recurrent laryngeal nerve.

This study aimed to describe the novel procedure of thoracoscopic 4L lymph node dissection using the confronting upside-down monitor setting and to determine the surgical outcomes.

A thoracoscopic lobectomy with lymph node dissection is performed using four ports (7, 7, 15, and 30 mm) with confronting upside-down monitor setting (Figure 1) (6,7). Two monitors are installed on the cranial side of the patient, and one of the monitors is placed upside down. The surgeon stands on the right side of the patient regardless of the operation side (in a left-sided operation, ventral side). The camera and secondary assistants stand on the left side of the patient. During a left-sided surgery, the secondary assistant focuses on providing the surgeon with a better view of the surgical site by placing two instruments using a 15-mm port in the seventh intercostal space. The camera assistant places a 7-mm port in the fifth intercostal space and can visualize all structures in the chest cavity with a 30-degree scope. A 30-mm utility incision is made in the fifth intercostal space, and a 7-mm port is inserted in the third intercostal space for the operator’s right hand. In this setting, the surgeon can use both hands freely and perform a sharp dissection using traditional Metzenbaum scissors.

Figure 4 This video demonstrates how thoracoscopic left lower lobectomy with systematic mediastinal lymph node dissection is performed using 4K video-thoracoscopy. The left side shows the cranial view, whereas the right side shows the caudal view. First, the 4L posterior first technique was performed. The left recurrent laryngeal nerve was dissected to the distal side, and the bronchial arteries were divided. Fused fissure was divided using an anterior approach. The pulmonary vessels were divided using endoscopic staplers. The left lower lobe was retracted cranially, and subcarinal lymph nodes were dissected. After the removal of left lower lobe, the 4L lymph nodes and lymph nodes number 5, 6, and 10 were dissected (9). Available online: http://www.asvide.com/watch/33042

The operative and clinical records of the patients who underwent thoracoscopic 4L lymph node dissection between 2016 and 2018 were retrospectively analyzed. The stations of lymph nodes were defined according to the lymph node map proposed in 2009 by the International Association for the Study of Lung Cancer (10). A comparison between the novel method group and the conventional method group matching the surgical procedure and main operator was performed. The surgical procedure was limited to thoracoscopic left upper lobectomy with lobe-specific mediastinal lymph node dissection omitting subcarinal lymphadenectomy. The patients with lung cancer invading the chest wall or broad pleural adhesions were excluded. In this study, one of the four experienced general thoracic surgeons (M Mun, M Nakao, Y Matsuura, and J Ichinose) performed the operation. The main operators were divided as follows: the senior surgeon (M Mun) and the junior surgeons (M Nakao, Y Matsuura, and J Ichinose), and the ratio of the senior to the junior surgeons was matched (1:2) in both of the conventional method group and the novel method group. The matched comparison was analyzed using IBM SPSS Statistics version 25 software (SPSS Inc., Chicago, IL, USA). Variables were compared using the Student’s t-test or Fisher’s exact test. P<0.05 was defined as statistically significant.

From January 2016 to November 2018, 99 consecutive patients with primary lung cancer of the left upper lobe underwent thoracoscopic left upper lobectomy and systematic lymph node dissection. In 21 patients, 4L lymphadenectomy was omitted because of oncological reasons or patients’ comorbidities. Forty (51%) of 78 patients underwent thoracoscopic 4L lymphadenectomy using the novel method: 4L posterior first approach. The operation time was 200±41 min, whereas the volume of blood loss was 27±28 mL. The length of postoperative hospital stay was 6±3 days. No 90-day and in-hospital mortality were reported, and none of the patients were converted to thoracotomy.

In our initial experience, our 4L posterior first technique was a useful procedure, which shortened the operation time and reduced the amount of bleeding in thoracoscopic left upper lobectomy with systematic mediastinal node dissection.

However, the novel method described in this study has been performed earlier. Our predecessors, Dr. Ken Nakagawa and Dr. Sakae Okumura, had performed 4L lymphadenectomy via thoracotomy using the same technique, i.e., initially dissecting the posterior side of 4L (Figure 5). Traditional surgical techniques developed over a long period of time and through experience with open surgery have a precious value also in minimally invasive procedure, such as thoracoscopic surgery and robot-assisted thoracic surgery. 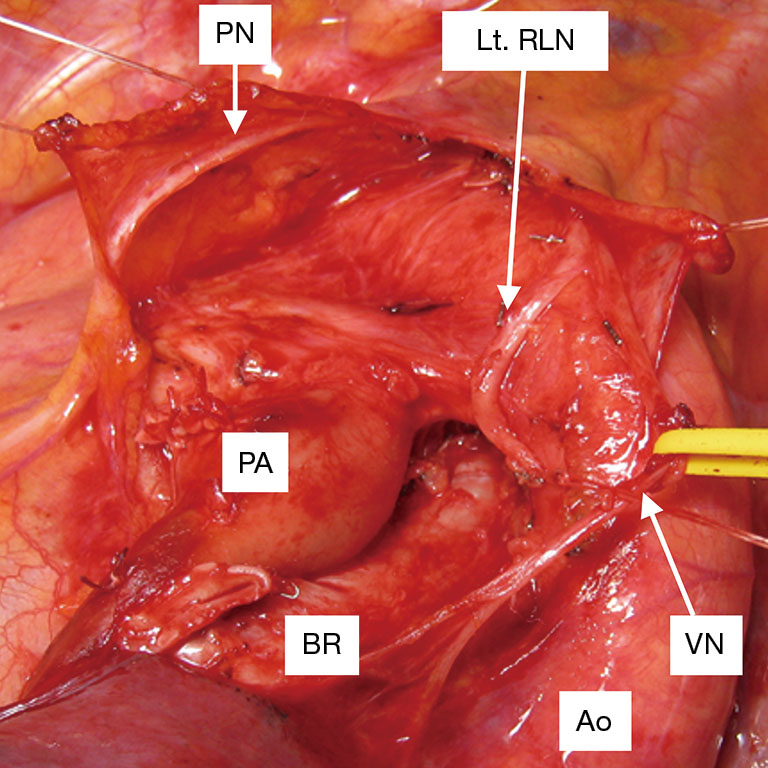 The authors sincerely thank Dr. Ken Nakagawa and Dr. Sakae Okumura for teaching them the techniques of performing precise lymphadenectomy.

Conflicts of Interest: Presented at the 36th Annual Conference of Japanese Association for Chest Surgery, Osaka, Japan, May 16–17, 2019.