Technological advances in minimally invasive (MI) approaches are rapidly taking places in daily routines. Esophagectomies are technically complicated, patients are exposed to major surgical trauma in 2–3 different anatomic regions, resulting in an increase in postoperative morbidity and mortality. In the literature review, there are publications on thoracoscopic release of the esophagus (1) and traditional 4-port thoracoscopic release and anastomosis and it is seen that the morbidity is less in minimally invasive esophagectomy (MIE) groups when the overall morbidity is considered (less blood loss, shorter hospital and intensive care unit stay) (2-4). During transition to MIE, increasing trend for MI Ivor-Lewis than MI Mckeown procedure was observed. High incidence of anastomotic leak, strictures and recurrent laryngeal nerve damage caused this change regardless of incision (3). Traditional MI VATS as a part of esophagectomy is performed by using 4–5 ports (4). The use of uniportal video-assisted thoracoscopic surgery (U-VATS) approach has become inevitable today for esophagectomy. Robot-assisted thoracoscopic surgery (RATS) has also been used for esophagectomy as a new trend in thoracic surgery, but VATS is obviously cheaper and more widely available. In this article we describe important points of VATS uniportal intrathoracic esophagectomy.

The patient is positioned to left lateral decubitus after double lumen intubation. The incision is positioned on 5th or 6th intercostal space at the posterior axillary line (Figure 1). Thirty degrees tilting of the patient will help in the anterior displacement of the lung. At the incision retraction forceps, camera and energy device are located at apex, middle and bottom respectively. Mobilization of the esophagus starts with inferior pulmonary ligament (Figure 2). Ligament is divided totally and lymph nodes located at 8 and 9 stations are dissected with the esophagus. Dissection continues for the opening of posterior mediastinal pleura as the guidance of pericardium, intermediary bronchus, subcarinal lymph node and azygos vein (Figures 3,4). At this time, resectability of the esophagus is evaluated and if appropriate, azygos vein is divided with an endoscopic vascular stapler (Figure 5). For dissection of deeper planes lung must be retracted anteriorly by the ring forceps and for contralateral traction peanut is used. Instruments are located during this maneuver from apex to the bottom, peanut, camera, ring forceps and energy device, respectively. Dissection continues until aorta is seen with the guidance of hemiazygos vein and the fatty tissue neighboring the esophagus paravertebrally. Right angle clamp is passed from anterior to posterior and encircled with a 2-cm Penrose drain that helps to retraction of esophagus (Figure 6). Energy device is used for sealing of deeper aortic branches with the help of anterior Penrose tape retraction. There is no need for lung retraction with this maneuver. During release of subcarinal area and left main bronchus peanut forceps is used under esophagus for upward traction and care must be given not to damage membranous trachea (Figure 7). Penrose drain is grasped in thorax closer to the esophagus and swiped to apex to better assist the retraction and esophagus is released totally. After this releasing subcarinal and left paratracheal areas are clearly visualized. In order to prevent recurrent laryngeal nerve damage dissection is continued closer to the esophagus above the level of the azygos vein (Figure 8). If neck anastomosis is planned Penrose tape is tied around the esophagus and placed posteriorly to the neck. 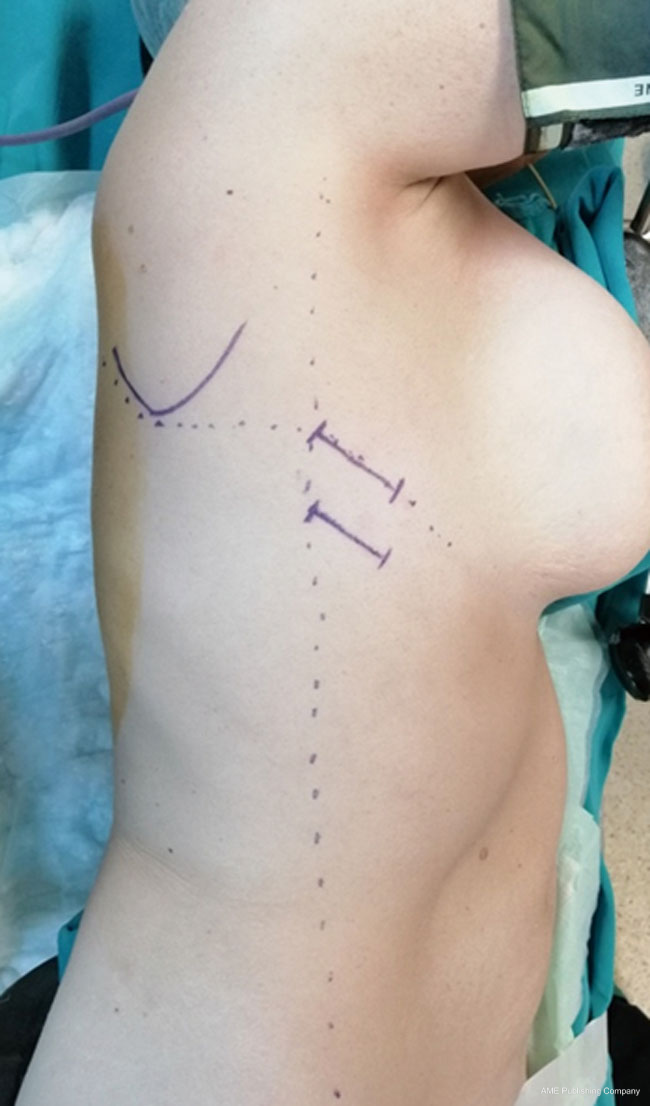 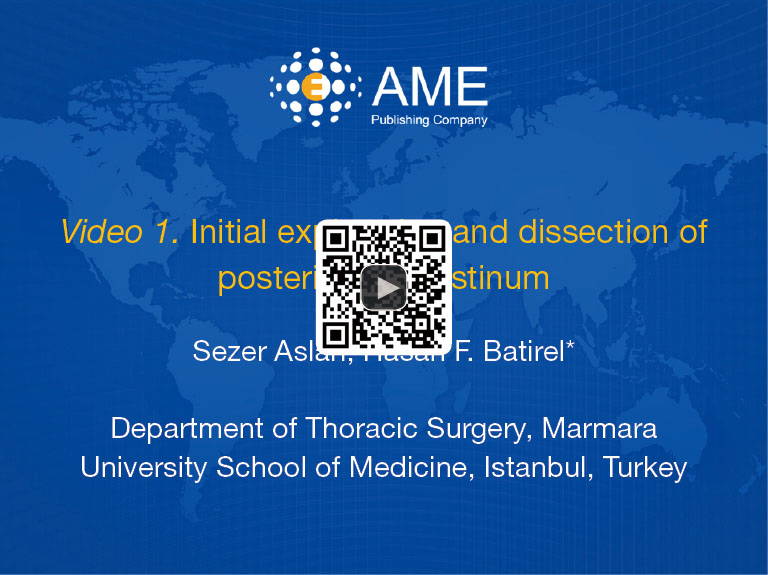 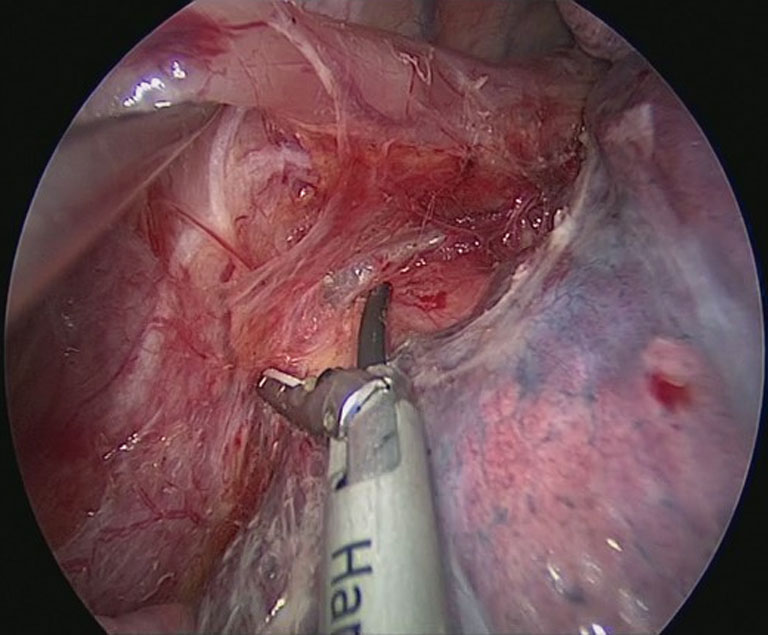 Figure 3 Esophagus is lifted and pericardium is taken as a guide for anterior dissection. 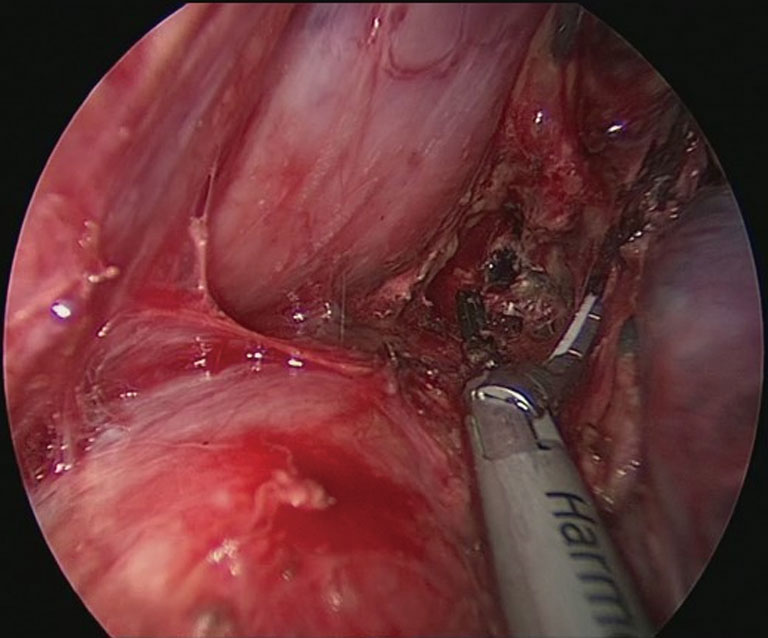 Figure 4 Subcarinal lymph node is lifted to the esophagus and freed from the right and left main bronchi. 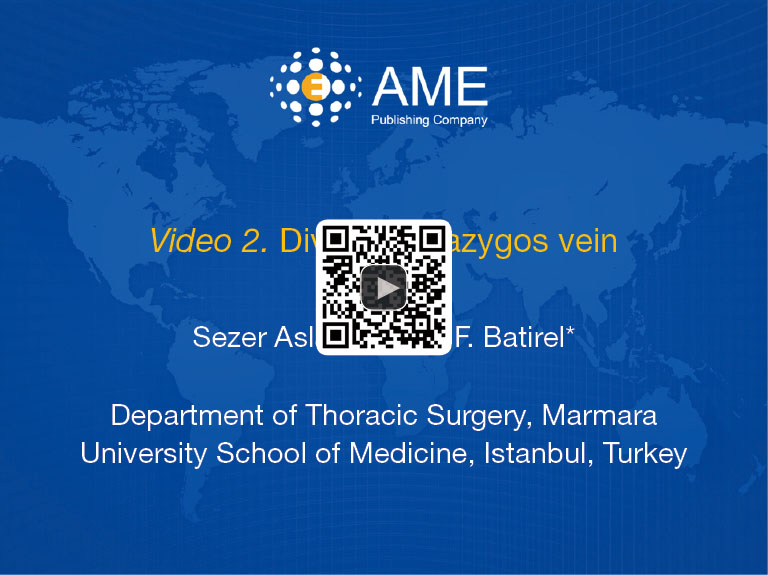 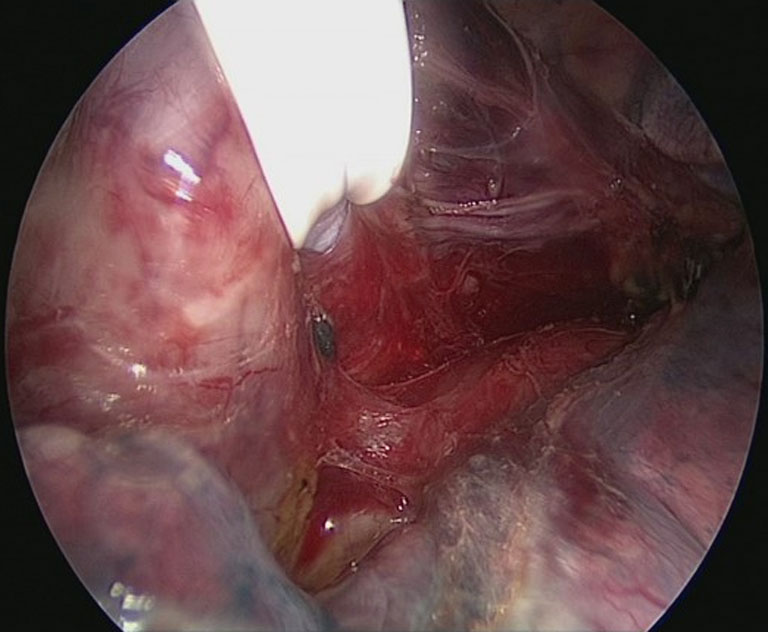 Figure 6 Esophagus is encircled with a 2-cm Penrose drain and care should be taken to include both vagal nerves to preserve the dissection plane. 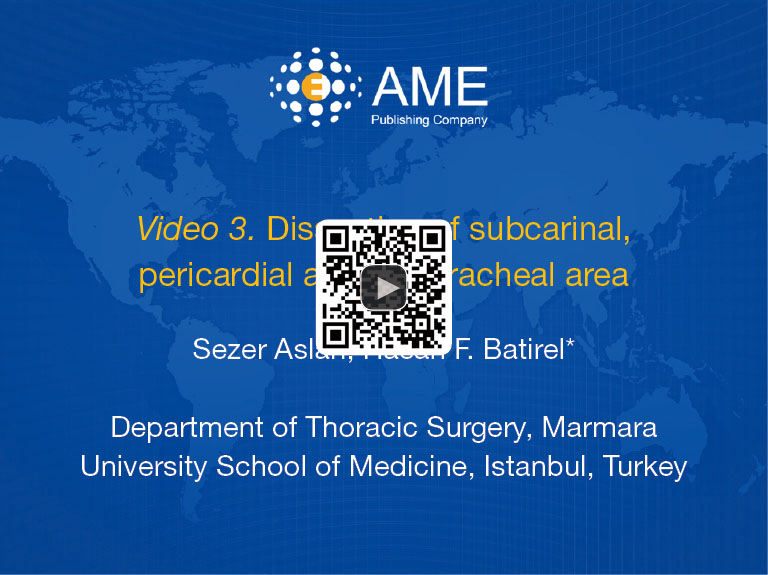 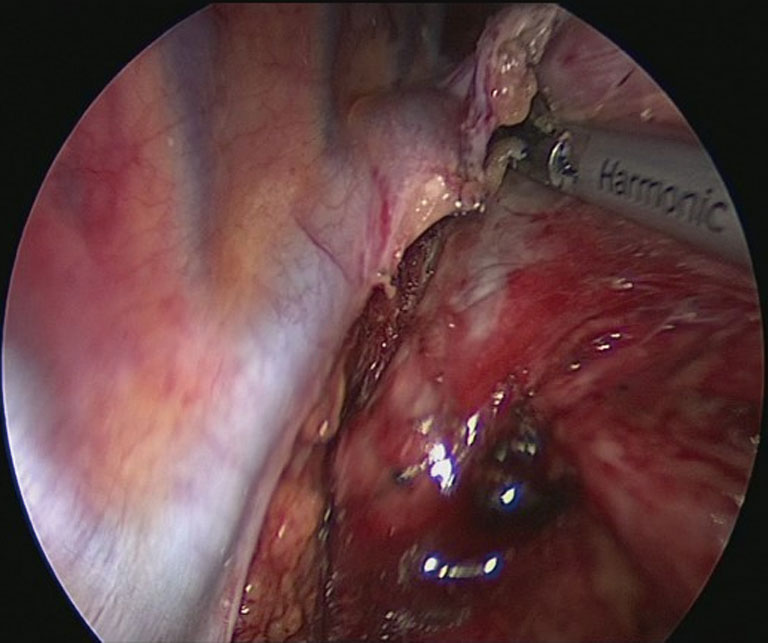 Figure 8 Above the azygos vein dissection is carried out close to the esophagus to prevent injury to the recurrent laryngeal nerves. 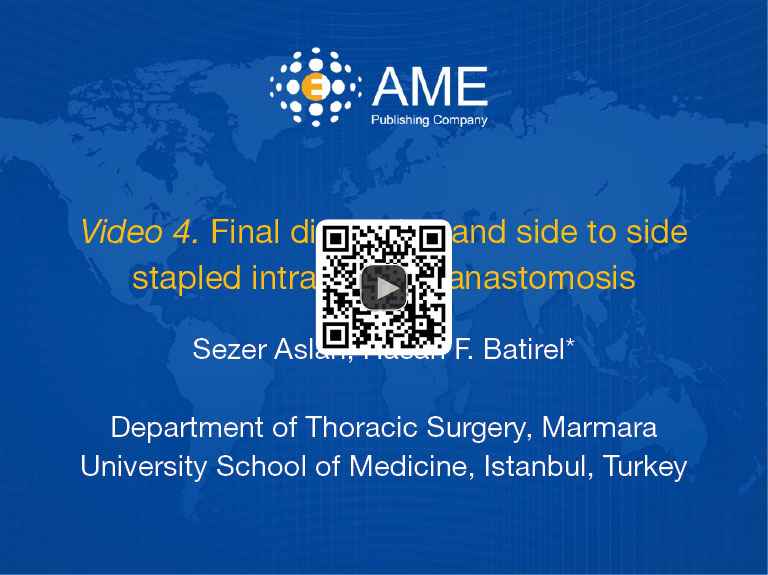 Figure 9 Final dissection and side to side stapled intrathoracic anastomosis (8). Available online: http://www.asvide.com/watch/32926

Pulling conduit from abdomen must be at correct orientation and nasogastric (NG) tube must be removed completely. Stapled line formed at abdomen to construct conduit is to face lateral chest wall. Before resection, apex of the gastric conduit is pulled to the apex to measure the length of conduit. Once anastomosis level is determined gastric conduit and esophagus are divided with endoscopic staples. After specimen is removed from thorax, no 1 silk sutures are placed at the apex of the gastric conduit and esophageal tips closer to the stapler line and gastric conduit is pulled out of the thorax. Sutures are used for retraction. At the medial face a small esophagotomy to pass one leg of endoscopic stapler is formed (Figure 10). Full thickness opening is checked with NG tube advancing through the opening and NG tube must be seen in the esophagotomy. After that gastric conduit is pulled out from the uniportal incision and gastrotomy is formed at the same diameter, preferably at the anterior side. Usually 6–7 mm opening away from stapled tip is enough (Figure 11). Sixty-mm endoscopic stapler is used for esophagogastric anastomosis. Thick leg of stapler is put into the gastric conduit and thin leg is put into esophagus with the guidance of NG tube. At this point make sure that NG tube is completely removed and both edges of conduit and esophagus are aligned at the same line. After this check point, we are ready for construct posterior side of anastomosis (Figure 12). After posterior side of the anastomosis is formed, an NG tube may be advanced under direct vision again. Gastric and esophageal tips are retracted to the lateral chest wall and anastomosis is completed with side closure using endoscopic staplers (Figure 13). 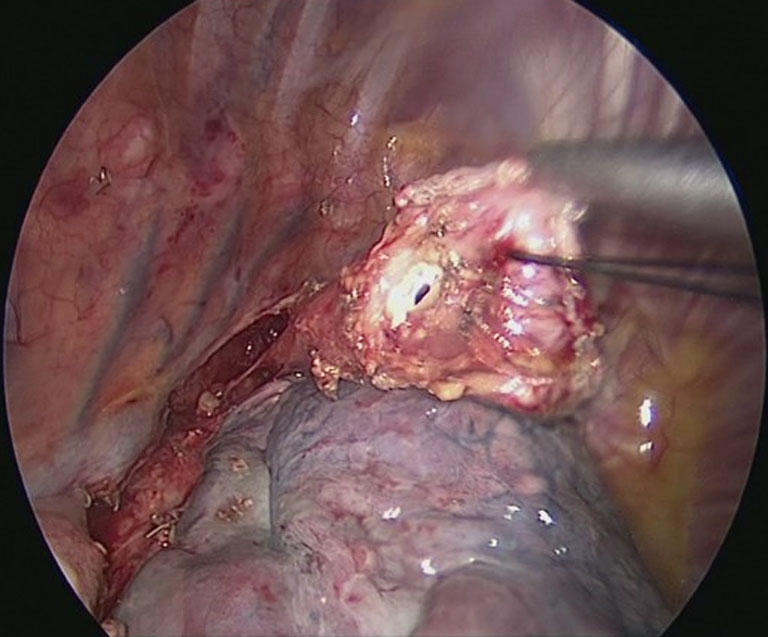 Figure 10 A small esophagotomy is performed to advance the stapler leg. 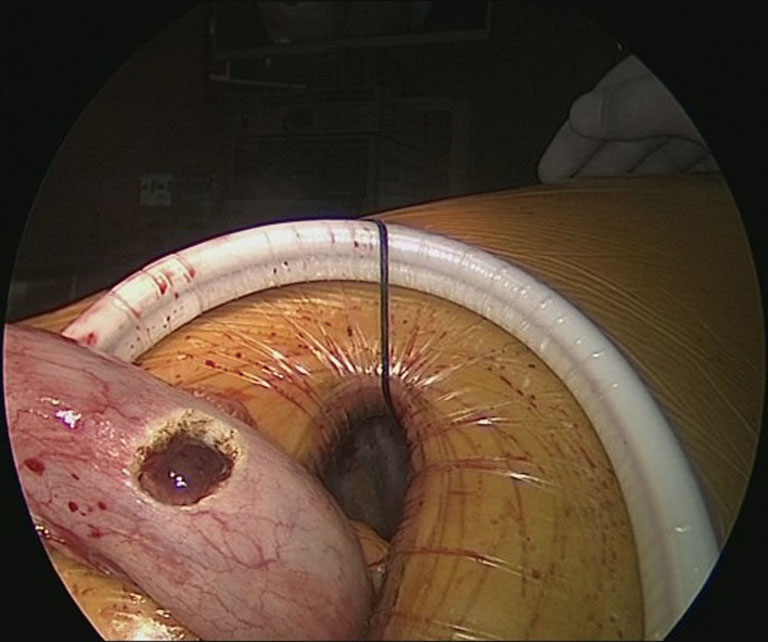 Figure 11 A similar gastrotomy is performed away from the tip. 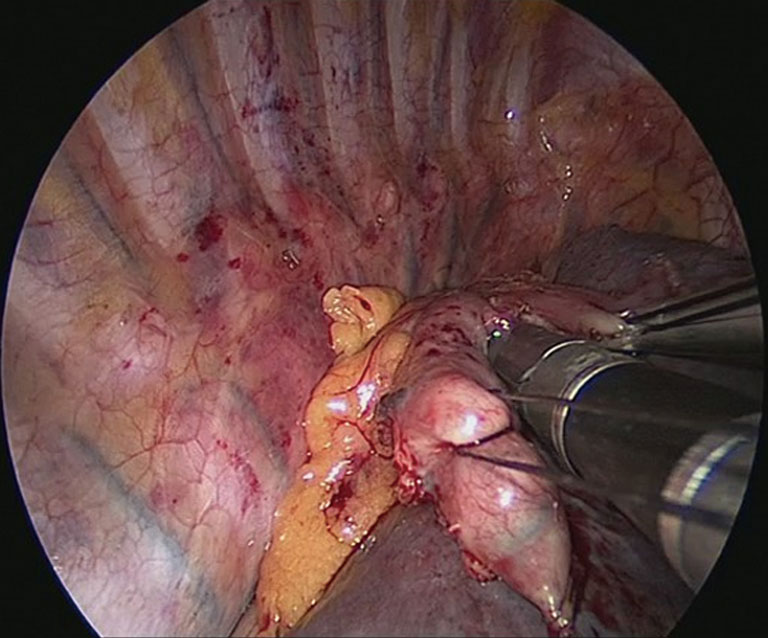 Figure 12 Both stapler legs are advanced in the esophagus and stomach and this firing forms the posterior wall of the anastomosis. 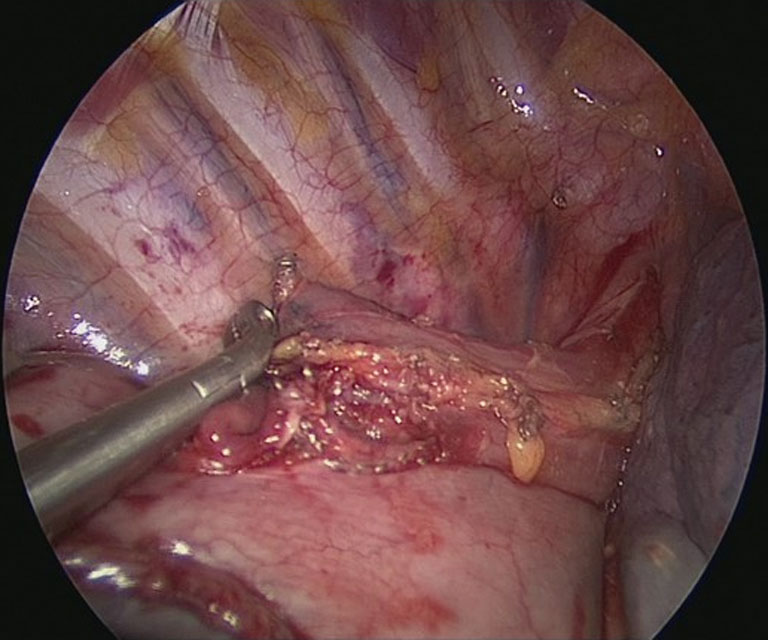 Figure 13 The plane for stapler firing on the lateral wall of the anastomosis.

Limited number of papers are found on literature review about complete U-VATS esophagectomy (9-12).

We had published our technique before and have presented our U-VATS intrathoracic esophagectomy abstract at the 2019 European Society of Thoracic Surgeons (ESTS) meeting in Dublin (9). In 18 patients (16 MI Ivor-Lewis) with esophageal cancer there was no perioperative mortality (10). Average number of lymph nodes removed were 23±8 and mean duration of VATS was 82±22 minutes. Eight patients had preoperative chemoradiation. Three patients had leaks. Two occurred in the chest (1 late 22 days after surgery), 1 in the neck. The early leak in the chest was related with the viability of the esophagus and in that case anastomosis should have been performed in the neck.

Two reports from Italy also analyzed uniportal approach in esophageal cancer. Uniportal esophageal approach was reported by Nachira and colleagues in 12 patients (11). Two patients had early leak. Mean operative VATS time was 105±21 minutes. Average number of lymph nodes removed was 10.4±4. No intrathoracic anastomosis was performed, this approach was only for esophageal mobilization. Another report was by Caronia in 2018 (12). In this case report, incision was located posteriorly with a circular stapled anastomosis in the chest.

In a study in which classic 4-port VATS and single utility incision were compared, perioperative parameters and postoperative morbidity-mortality were investigated. Although there was no statistically significant difference, postoperative hospital stay and morbidity were lower in single utility incision group (1). However, it is well known that MIE is associated with a lower pulmonary complication rate following esophagectomy and this was proven in a randomized study (13).

Surgeon experience is directly correlated with perioperative outcomes. Swanson and colleagues shared their findings of uni-surgeon 170 cases with MI Ivor-Lewis esophagectomy (16). One hundred and seventy cases were divided to 4 subgroups. There were no anastomotic leaks in the late of 40 patients. They also found statistically significant difference between subgroups on median length of stay and 90-day readmission.

As in all MI approaches U-VATS intrathoracic esophagectomy is developing and appears to be safe, less traumatic and may have benefits on postoperative morbidity and mortality. Future studies will give us guidance about reproducibility, advantages and disadvantages.

Conflicts of Interest: Dr. H Batirel is a consultant with Johnson and Johnson and receives fees and honoraria. S Aslan has no conflicts of interest to declare.

Ethical Statement: The authors are accountable for all aspects of the work in ensuring that questions related to the accuracy or integrity of any part of the work are appropriately investigated and resolved. Informed consent was obtained from the patient for publication of this manuscript and any accompanying images.