Peyronie’s disease (PD) is postulated to be a disorder of penile wound healing, resulting in fibrosis of the tunica albuginea and plaque formation. It can lead to penile deformity, discomfort, and curvature prohibiting sexual intercourse. The disease has two phases. The acute phase is characterized by the initial plaque formation, progression of curvature and commonly painful erections. On the other hand, the chronic phase represents the stabilization of the plaque, resolution of pain with erections, but persistent penile deformity and curvature. As a result of physical deformity, men afflicted by PD often experience taxing psychological distress, which can impact interpersonal relationships and reduce quality of life (1). Prevalence rates for PD have been estimated to range from 0.5% to 13% of the U.S. population, and of those with PD, up to 30% are estimated to have concomitant erectile dysfunction (ED) (2,3). Treatment of PD is focused on optimizing sexual function and depends on the disease phase. Surgical strategies are only recommended for men with chronic phase PD and options include plication techniques, plaque incision/excision with grafting, and inflatable penile prosthesis (IPP) implantation when there is significant concomitant ED (4). This video will focus on the role of penile prosthesis implantation for treating PD in men with concomitant ED (Figure 1). Specifically, the methods for addressing residual curvature following prosthetic implantation and their respective roles will be discussed. 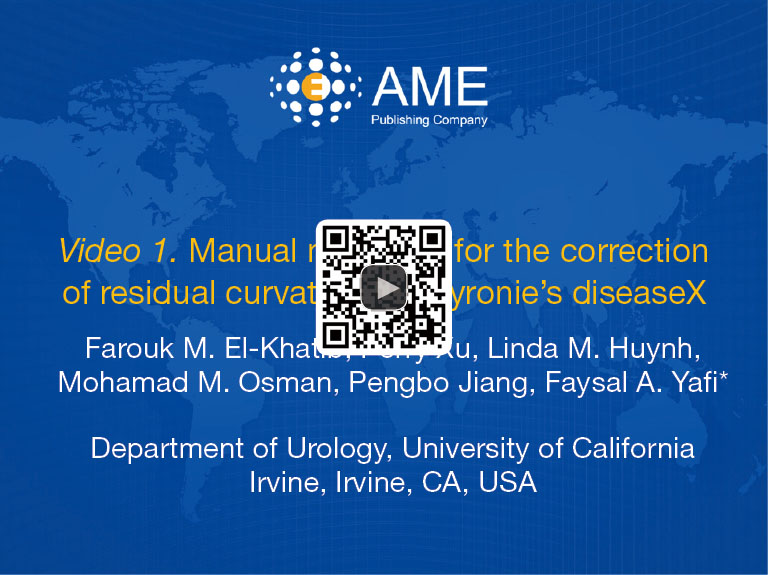 The IPP was first introduced in 1973 and has since rapidly evolved. Prosthetic placement effectively corrects both penile curvature and sexual dysfunction simultaneously with high patient satisfaction rates (6). In up to 39% of cases, prosthetic implantation alone can satisfactorily correct penile curvature (7). This correction is thought to be due to the intraoperative dilation of the corpora which would inherently disrupt the diseased fibrotic tissue. However, in the other 61% of cases, further intraoperative straightening procedures are needed (7). Like the initial surgical strategies for PD treatment, plication and plaque incision/excision with grafting are again possible treatment options for this residual curvature. However, plication and grafting are not without possible complications such as penile shortening, sensory changes and worsening erectile function. An alternative option for treating residual curvature following prosthetic implantation is manual modeling. In fact, given its safety and efficacy, manual modeling is the predominant method for penile straightening following prosthetic placement and is systematically performed prior to additional surgical techniques for residual curvature correction as stated in the American Urological Association PD’s guidelines “clinicians may perform adjunctive intra-operative procedures, such as modeling, plication or incision/grafting, when significant penile deformity persists after insertion of the penile prosthesis” (Guideline Statement 21).

Manual modeling for penile straightening during IPP placement was first described by Wilson & Delk in 1994 (8). There are several major steps to follow when performing manual modeling. After the penile prosthesis is placed and inflated, the prosthesis is forcefully bent in the opposite direction of the curvature. This position is then held for approximately 90 seconds. Then, the degree of curvature is reassessed, and a second round of modeling may again be performed. In their original study, Wilson & Delk demonstrated that this technique has an 86% success rate in residual curvature correction following IPP placement (8). In further studies, authors achieved an 80–100% curvature correction after modeling (9,10). This technique, however, is not without complication. The most worrisome complication is urethral injury. In the Wilson & Delk series, there was a 4% rate of urethral perforation (8). Most studies have confirmed this rate and demonstrated that this rate was not lowered by limiting the number of modeling rounds (6). This complication is likely due to the extrusion of the distal tips of the prosthetic cylinders at the fossa navicularis. Therefore, to avoid this complication, the bending hand should be placed on the shaft of the penis, as opposed to the glans, with the other hand firmly holding pressure down over the corporotomies. For the cases that have persistent penile curvature greater than 30 degrees following two rounds of manual modeling, plication or plaque excision incision and grafting is then performed. Overall, manual modeling of the penile prosthesis has been demonstrated to be a safe and effective way to correct residual curvatures when treating PD and could be first performed before considering additional surgical corrective techniques.