Reconstruction of large bone defects around the elbow joint is a challenging issue in orthopedics, especially when performed in pediatric age. In recent years, many strategies have been proposed to restore bony defects following tumors resection (1). The non-microsurgical options are limited to allograft, prosthesis, or composite of both [allograft prosthesis composites (APC)]. All these alternatives present some disadvantages in the pediatric age: a frozen allograft of proper size is difficult to obtain and is prone to articular fracture and degenerative changes at medium term during internal repair (2). Modular megaprosthesis of distal humerus is indicated in adults, but prosthesis endurance is unpredictable, their size is not suitable for children, and they cannot provide growth. Custom made hemiarthroplasty of the distal humerus is another option, with concerns regarding elbow stability. Moreover, in case of subtotal humerus resection, prosthetic anchorage into the small residual proximal humerus would not be possible and prosthetic reconstruction would require a total humerus custom made lengthening hemiarthroplasty (3,4). Autologous reconstruction of massive bone losses of the distal humeral epiphysis have been described in the literature, but published case numbers are small with heterogeneous diagnosis (5-7). Since the proximal growth plate is responsible for 80% of humeral bone growth (8), there is no need to transfer a vascularized proximal fibular epiphysis, as required in distal radius reconstruction (9-12). The purpose of this article is to introduce a new single-step technique to reconstruct humeral epiphysis and diaphysis following Ewing’s sarcoma resection using a vascularized transfer of iliac crest and fibula grafts reinforced with an allograft.

A 5-year-old patient presented with a lytic lesion in the right distal humerus. Magnetic resonance imaging (MRI) was suggestive of malignant bone tumor with extension to the surrounding soft tissue (Figure 1). No metastatic lesions were found on chest CT scan and bone scintigraphy. An open biopsy was performed and demonstrated Ewing’s sarcoma. One month after completion of neoadjuvant chemotherapy, he underwent resection of humeral diaphysis and distal epiphysis, and immediate reconstruction with free iliac crest and fibula flaps. An allograft was used to reinforce the vascularized transplants in the diaphyseal part.

The operation was performed using a two-team approach in conjunction with orthopedic surgeons performing the resection of the tumor and osteoarticular reconstruction.

Patient was placed in supine position. A double curved-S-incision was used, starting proximally at coracoids process into a deltopectoral approach and prolonged on the lateral aspect of the arm and elbow. Insertions of deltoid, pectoralis major, latissimus dorsi and teres major were cut from the humerus. A careful blunt dissection was performed to separate and protect the neurovascular bundle (median nerve, and the brachial artery and vein); radial nerve in the arm and ulnar nerve in the epitrochlear fossa were identified and preserved. Biceps was preserved while part of the brachialis, brachioradialis and triceps muscle were resected and left for tumor coverage. Elbow arthrotomy sparing medial and lateral ligaments was performed and the proximal humerus was cut with oscillating saw 1.5 cm below the proximal growth plate. Frozen section of the residual medullary canal ensured negative margins (Figure 2). 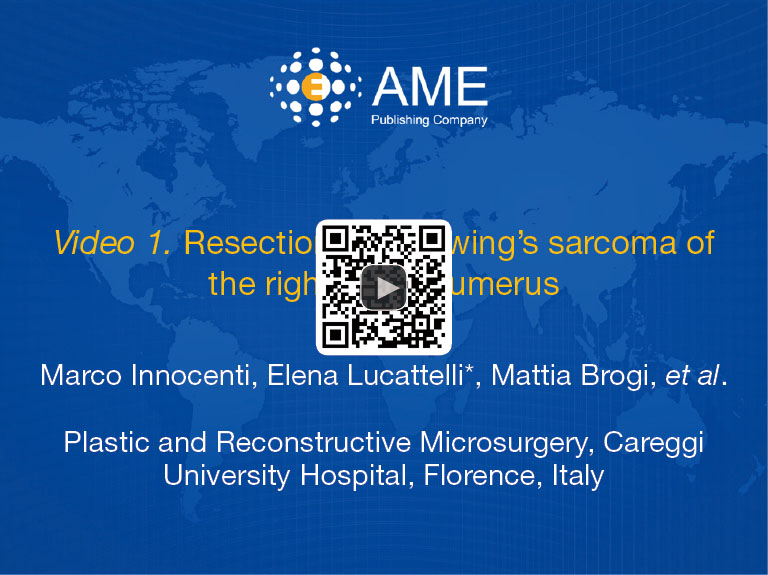 Simultaneously, we harvested the contralateral vascularized bony flaps (Figures 3,4). A 4 cm × 3 cm iliac crest graft was shaped to recreate the humeral epiphysis and fixed to a 13 cm long fibula flap with two 2.4 mm screws, then the two pedicles were anastomosed in end-to-end fashion. The cortical allograft was cut to match the resection defect and its medullary canal was enlarged to allow fibula concentric assembling (Figure 5). The fibular flap was then passed through the intramedullary canal of the allograft, and the iliac crest was fixed to the distal part of the allograft with two 2.4 mm screws (Figure 6). The construct was inserted in the recipient site and, under fluoroscopic control, fixed with the proximal part of the humerus with a 2.7 mm T-plate and screws (Figure 7). Due to the small size of the residual proximal humerus, the osteosynthesis was performed across the growth plate with the insertion of two epiphyseal screws (Figure 8). Medial and lateral collateral ligaments of the elbow were fixed on the iliac bone with suture anchors and the deep brachial artery with its comitant vein were used as donor vessels for an end-to-end anastomosis. The radial nerve was transposed anteriorly to avoid nerve compression (Figure 9). 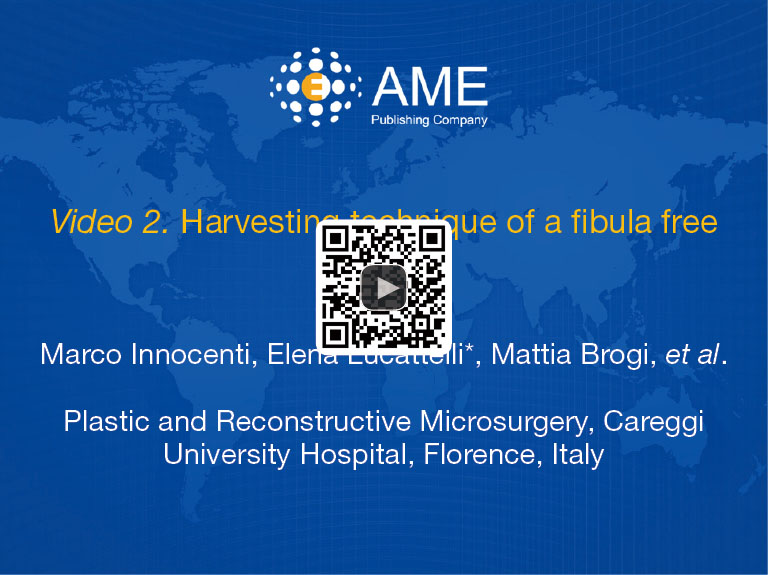 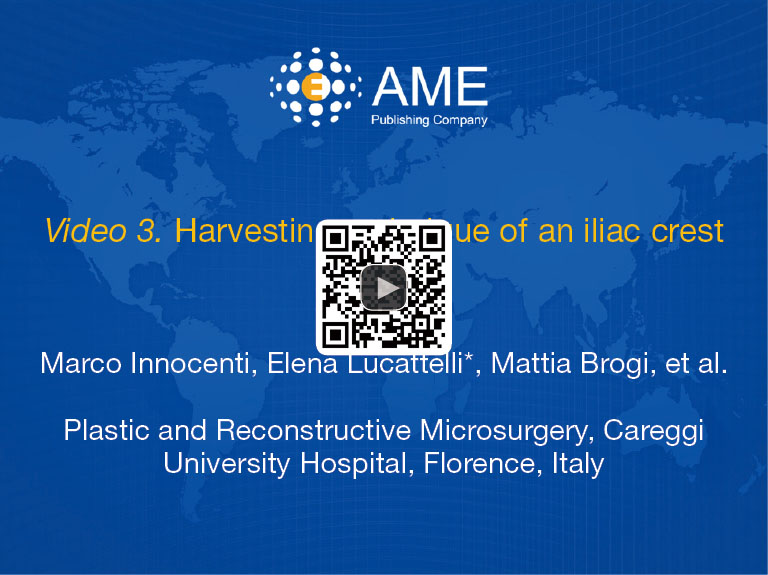 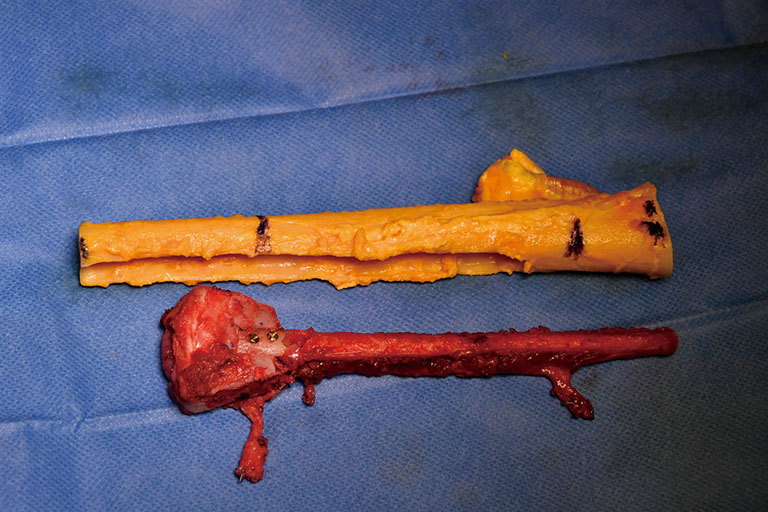 Figure 5 A 4 cm × 3 cm iliac crest free flap was shaped to recreate the humeral epiphysis and fixed to a 13 cm long fibula free flap with two 2.4 mm screws, then the two pedicles were anastomosed in end-to-end fashion. The cortical allograft was cut to match the resection defect and its medullary canal was enlarged to allow fibula concentric assembling. 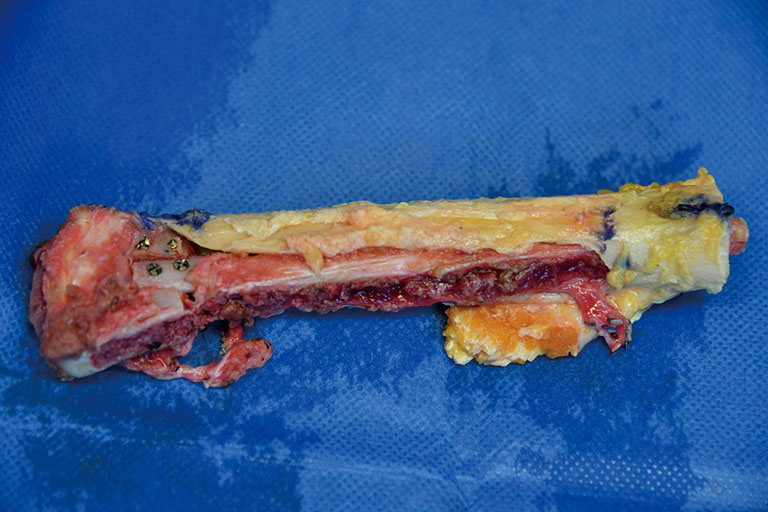 Figure 6 The fibular flap was passed through the intramedullary canal of the allograft, and the iliac crest was fixed to the distal part of the allograft with two 2.4 mm screws.

Figure 7 Schematic picture of the construct inserted into the arm and, under fluoroscopic control, fixed to the proximal part of the humerus with a 2.7 mm T-plate and screws. 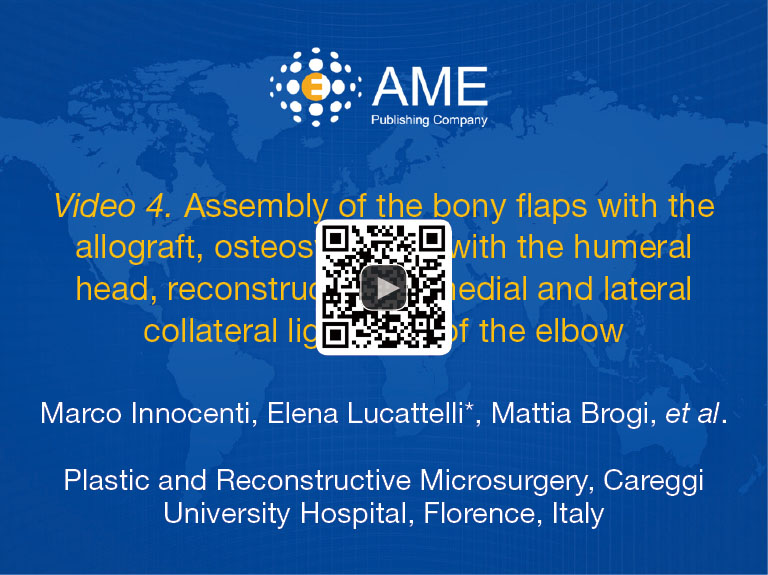 Figure 8 Assembly of the bony flaps with the allograft, osteosynthesis with the humeral head, reconstruction of medial and lateral collateral ligaments of the elbow (16). Available online: http://www.asvide.com/article/view/30504 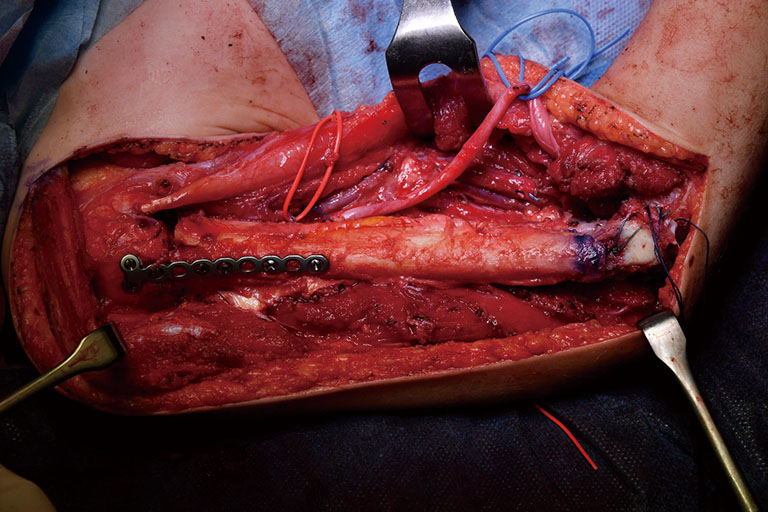 Figure 9 After the construct was inserted and fixed in the desired position, the radial nerve was transposed anteriorly to avoid nerve compression.

The elbow-joint was stabilized with a temporary trans-olecranon Kirschner wire, muscles tendons were reinserted, while pectoralis major was sutured onto the deltoid and brachioradialis onto triceps muscle. Under fluoroscopic control, tibiofibular metaphyseal synostosis at the donor-site ankle was performed with a 2.7 mm screw. Surgical sites were closed primarily and one suction drain was placed in each of them.

On the postoperative radiograph the construct was well-positioned and stable. The arm was immediately immobilized in Desault bandage. One month after surgery, the trans-olecranon Kirschner wire was removed and shoulder and arm brace was positioned for other 4 weeks, encouraging daily progressive and careful elbow passive mobilization. Active mobilization training of the shoulder and elbow was started at 8 weeks (Figures 10,11). Postoperative chemotherapy was delivered as soon as the wound was healed according to National protocol. There were no deep infections at either the donor or recipient sites. After 6 months, the patient fell on the ground reporting a traumatic minimally displaced fracture of the distal iliac crest flap without hardware loosening. No revision surgery was performed. After 8 months follow up, bony union was documented radiographically with no signs of local recurrence. No signs of metastasis were detected from the chest CT scan as well. At latest follow-up at 10 months, imaging confirmed allograft and flap union at proximal osteotomy and vascularized fibula diaphyseal hypertrophy (Figure 12). At clinical examination, the patient presented a full range of motion of the shoulder. The elbow was stable, with flexion from 45° to 110° and full pronosupination. 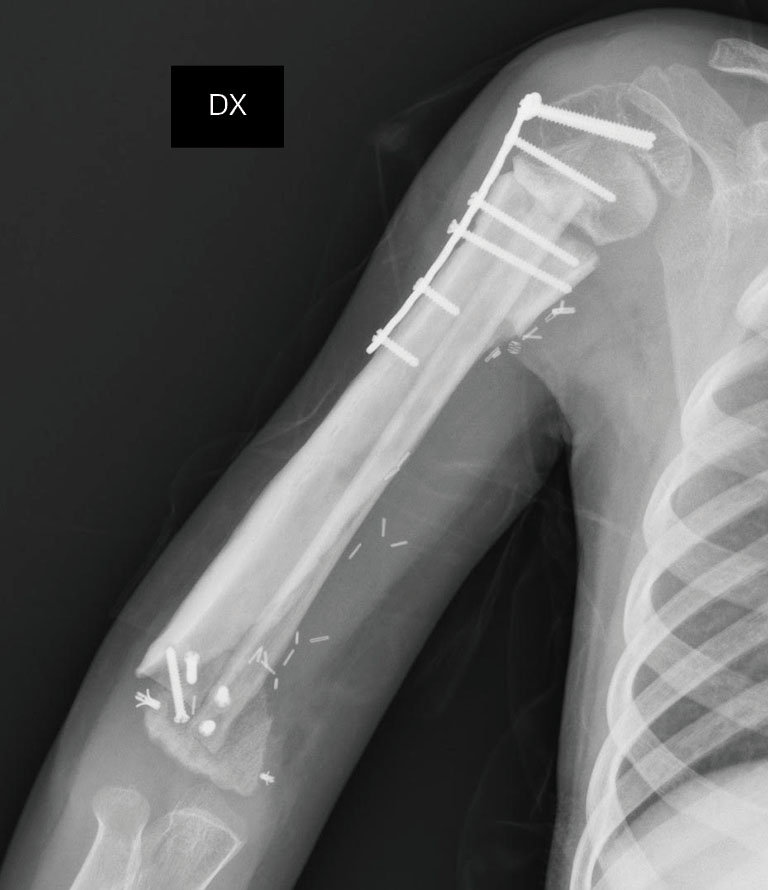 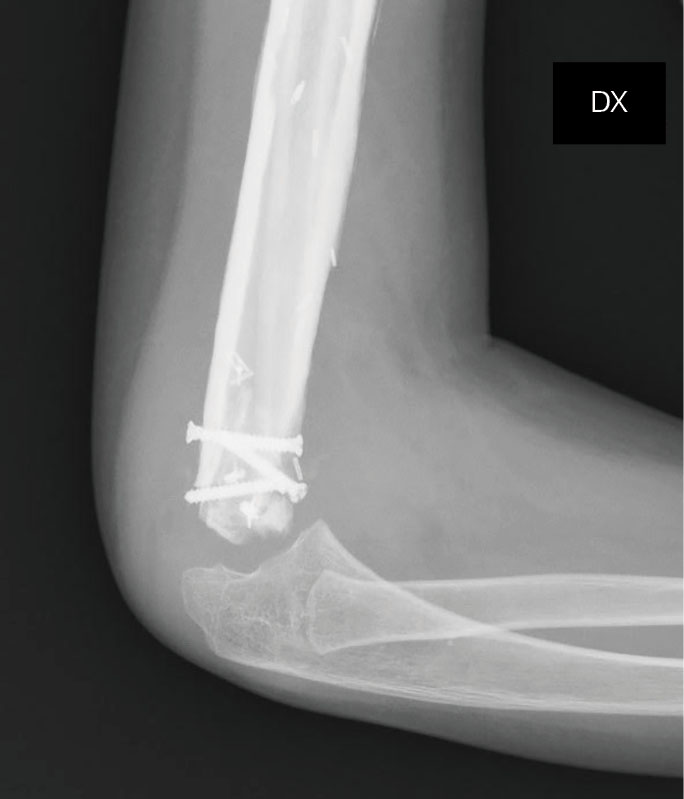 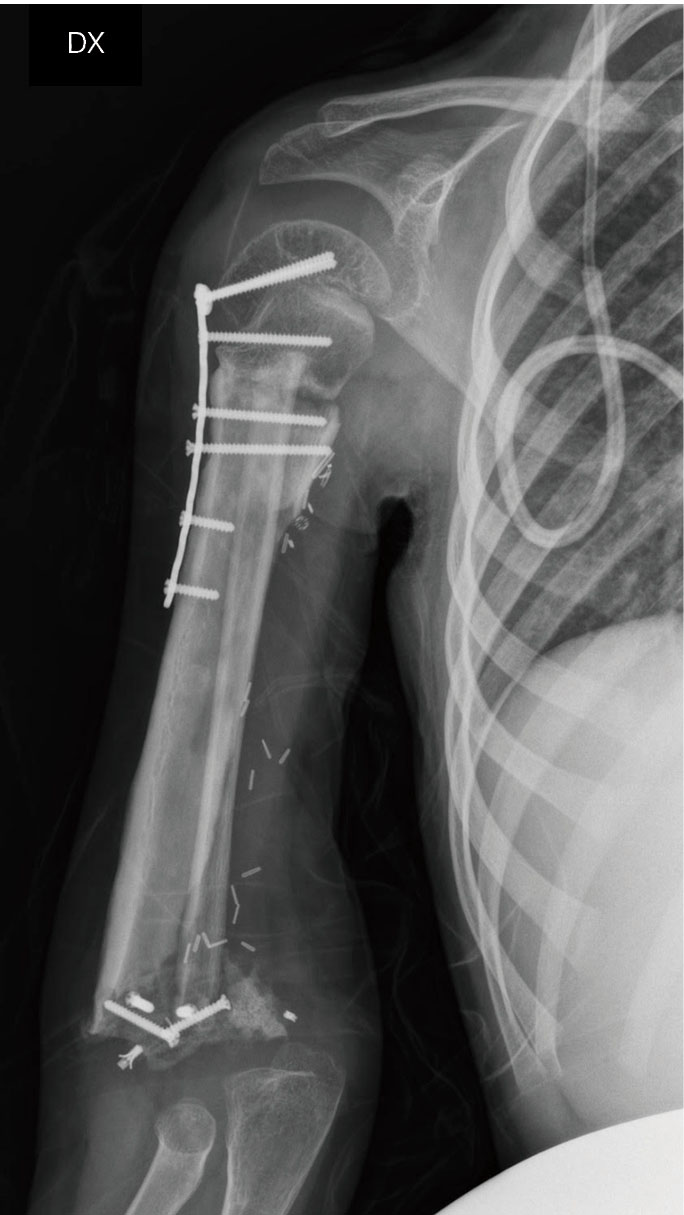 In conclusion, a satisfactory humeral and elbow-joint reconstruction can be obtained with this technique in repairing an osteoarticular massive defect following oncological resections. The alternative to this procedure would have been a total humerus custom made lengthening hemiarthroplasty. When it is not contraindicated, autologous biologic reconstruction is preferable to endoprosthesis, due to their high risk of complications and surgical revisions at long term. Particularly, the iliac bone provides the possibility to adequately shape the graft to fit the distal humeral part of the elbow-joint into the olecranon while using the fibula to restore the diaphysis. The inclusion of an allograft is useful to protect the vascularized fibular graft during the hypertrophy process, reducing complication rates. Long-term outcomes of this articular reconstruction still remain unknown: additional studies will be required to determine the long-term success, especially in young patients.

Informed Consent: Written informed consent was obtained from the parents of the patient for publication of this manuscript and any accompanying images.