Causes of pulmonary vessel injury can be classified into those (I) at dissection and (II) at cutting. Representative vessel injury at dissection is often caused by infiltrating lymph nodes due to silicotic, calcific, or metastatic lymph nodes, or by forcible tissue trafficking. Representative vessel injury at cutting is due to technical mistakes during ligation, or the use of staplers or energy devices. According to the National Institutes of Health’s Common Terminology Criteria of Adverse Events version 5.0 (1), Grade 4 is life-threatening bleeding, and Grade 5 is deadly bleeding (Table 1). If so, how much is bleeding over Grade 4? If a person loses approximately one third of their circulating blood volume, he or she will go into hemorrhagic shock. A male with a body weight of 60 kg has a circulating blood volume of 4,800 mL (approximately 8% of the body weight); therefore, losing approximately 1,600 mL (1/3 of 4,800 mL) is sufficient to cause hemorrhagic shock. Because blood flow in the pulmonary artery is the same as cardiac output (3.6 to 5.8 L/min =3,600 to 5,800 mL/60 seconds), blood loss reaches 1,600 mL in about only 20 seconds. Considering this, it is apparent that it may be easy to cause instant catastrophic bleeding if we damage major trunks or thick branches of the pulmonary artery, especially by misfiring staplers or causing pull-out injury in the pulmonary artery branch. Generally, it is probable that bleeding exceeding 1,500 mL is Grade 4 or greater, and bleeding above 1,000 mL is a dangerous situation.

The first thing to do before controlling bleeding is to calm yourself. We should never be upset and lose our composure. Absolutely, the most important thing during intraoperative bleeding is surgeons’ ability to evaluate a situation accurately.

Additionally, surgeons must inform anesthesiologists and operating room nurses about the bleeding, especially if severe hemorrhage occurs so that systemic blood volume can be maintained and the instruments for emergency thoracotomy can be promptly prepared. Because a clear field of view through the thoracoscope is easily obscured by blood spatter, it is necessary to clean thoracoscopic tips frequently and prepare two independent suction tubes. Moreover, it is also important to record scenes of hemorrhage for review using the thoracoscope.

Responding to bleeding during VATS: hemostasis

Many small bleeds can be stopped by compression alone; however, we should acquire proficiency in several hemostatic methods because we sometimes experience cases in which we struggle to achieve complete hemostasis. For temporal or complete hemostasis during thoracoscopic surgeries, we recommend applying a collagen patch coated with human fibrinogen and thrombin, TachoSil® (CSL Behring, King of Prussia, PA, USA), to the bleeding site. This can be cut into 1- or 2-cm squares and affixed with a drop of xylocaine jelly or saline solution on the surface before patching. We can carry this to the bleeding point using endoscopic cotton sticks and apply a patch to the point with compression for at least 3 minutes (Figure 1). This is an effective and useful way to achieve hemostasis in thoracoscopic surgeries, and complete hemostasis can be achieved without the need for any sutures in most bleeding cases (Figure 2). Regarding repairing vessel injuries, Ikeda et al. reported that elastic fibers and smooth muscle had completely regenerated in the medial and adventitial layer of the pulmonary artery in female beagles by 8 weeks after TachoSil® patch (5). If we feel it is hard to achieve complete hemostasis even using TachoSil®, we should immediately convert to open thoracotomy. Also, in the situation of bleeding from the root of first branches of pulmonary arteries, we should never hesitate emergency conversion and immediately try to clamp proximal side of the main pulmonary arteries. It would be more dangerous to continue to use the thoracoscopic approach during bleeding and continue with a hemostatic procedure in an unfamiliar situation. 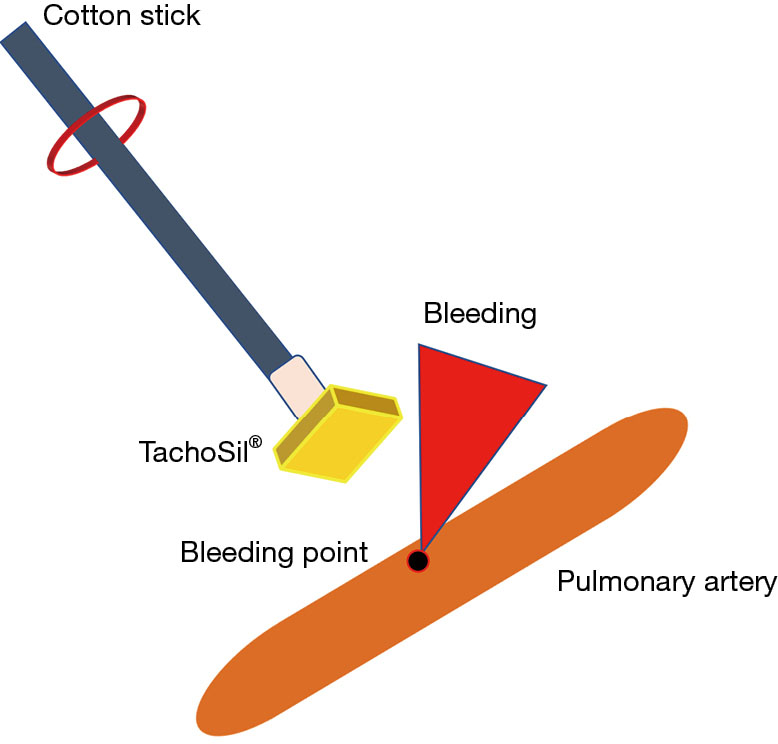 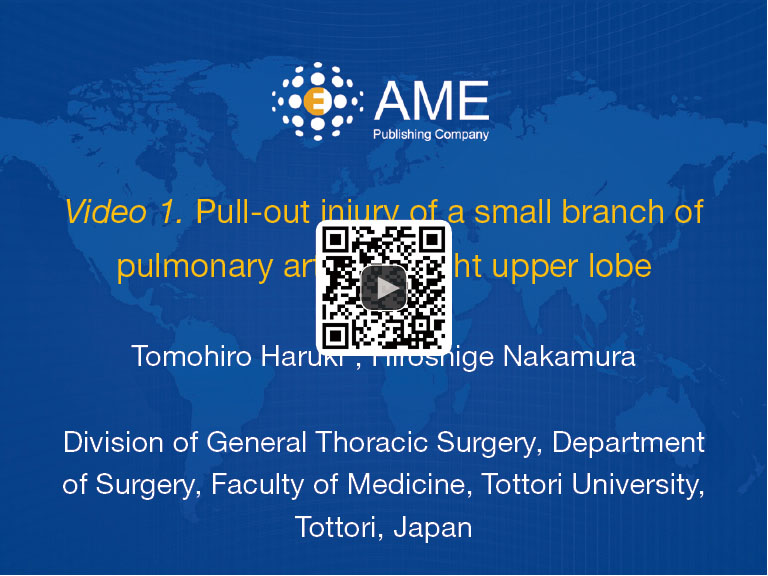 Figure 2 Pull-out injury of a small branch of pulmonary artery of right upper lobe (4). We applied TachoSil® patch to the bleeding point and complete hemostasis could be achieved without the need for any sutures. Available online: http://www.asvide.com/article/view/28188

Responding to bleeding during VATS: repairing and cutting injured vessels

To completely repair injured vessels, we must expose and mobilize the distal and proximal sides of the bleeding sites. Then we encircle and cross-clamp those vessels and continuously or interruptedly stitch up the injured sites with 5-0 or 6-0 non-absorbable monofilament suture. It is advisable to perform patch closure using autologous pericardium and so on if we find the relatively large injured area. When cutting the injured vessels, we do not need to remove the TachoSil® if we have obtained successful hemostasis with it. We can even suture or cut the injured vessels over it using endostaplers under safe conditions. As a matter of course, we should repair or cut injured vessels while controlling bleeding, and it is never safe to do so in the bloody operative field (Figure 3). 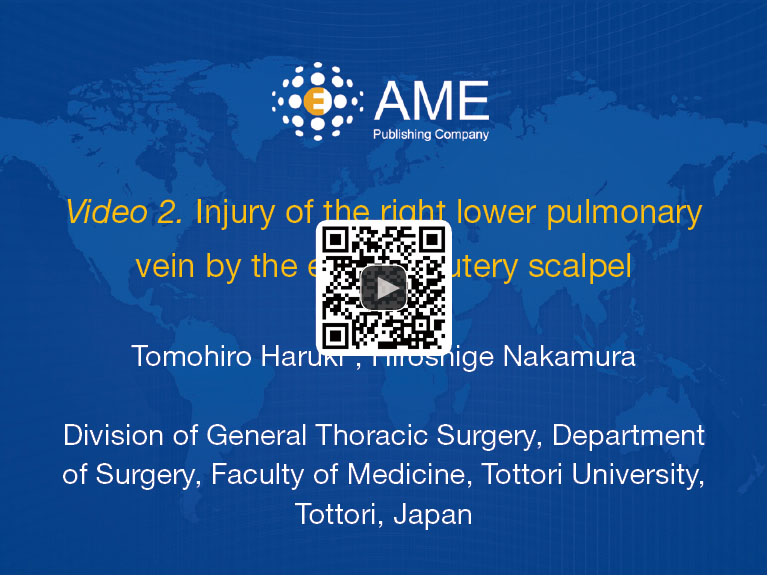 Figure 3 Injury of the right lower pulmonary vein by the electrocautery scalpel (6). There was a difficulty in controlling the bleeding because of extensive pleural adhesion. Having failed to apply the TachoSil® patch, we directly grasped the bleeding point by and sutured it interruptedly with 5-0 Prolene. Then we encircled the pulmonary vein and cut it with an endostapler safely. Available online: http://www.asvide.com/article/view/28189 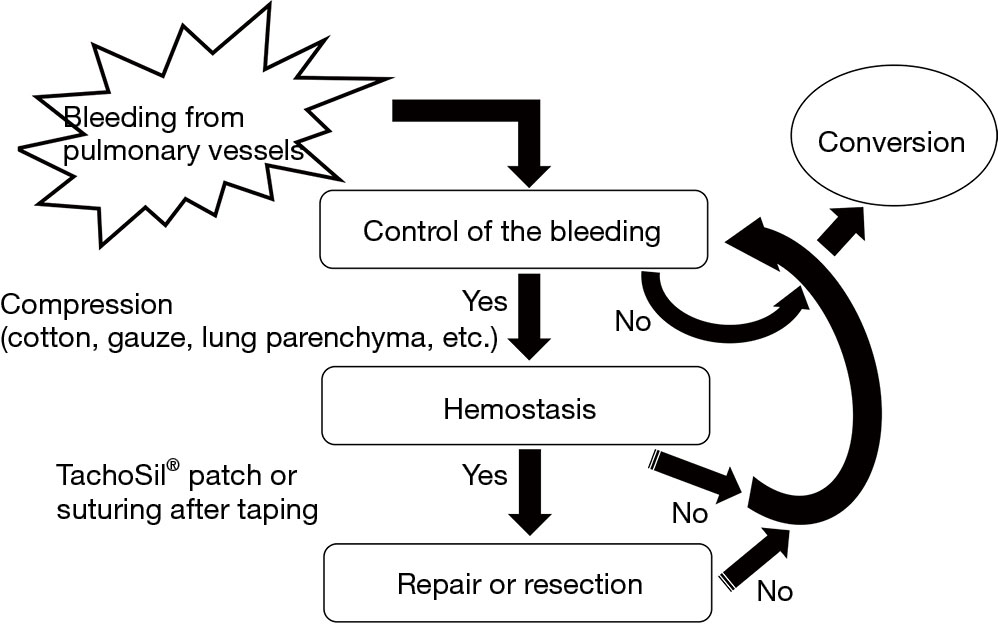 Responding to bleeding: indication and timing of conversion to open thoracotomy

There is an obvious difference in the indication and timing of conversion to thoracotomy among institutions and individual surgeons. Hanna et al. analyzed reasons for conversion and classified them into four types: (I) intraoperative complications (such as bleeding); (II) technical problems (such as calcified lymph nodes); (III) anatomical problems (such as unclear vision), and (IV) oncological conditions (such as metastatic lymph nodes or tumor invasion) (7). Gazala et al. also demonstrated the importance of conversion because of intraoperative bleeding in thoracoscopic surgeries (8). Samson et al. stated that the presence of calcified lymph nodes was a significant predicting factor for conversion to open thoracotomy in VATS (9). Yamashita et al. also analyzed the injury portions, recovery approaches, and hemostatic procedures of patients who underwent thoracoscopic surgery and had intraoperative vessel injuries (10). They found that injury in pulmonary artery branches was the most frequent cause of conversion to thoracotomy, and that bleeding could be adequately controlled under minithoracotomy.

Although not only indication and timing of conversion but also conversion methods differ among institutions, it is important to perform it as quickly as possible, accurately localize the bleeding site, and promote recovery with the minimal amount of bleeding.