Lung cancer represents a health issue worldwide, specially in Brazil. Once its incidence started to decline after the campaigns against tobacco, it is still by far the leading cause of mortality. The 5-year overall survival (OS) for the entire population remains low and the appropriate disease staging has direct implication in the treatment and in the disease prognosis. For clinical staging, guidelines recommend the use of PET-CT (1), although imaging work up with computed tomography (CT) or nuclear magnetic resonance (NMR) are appropriate in the absence of PET-CT. Once the images methods have only good accuracy the pathologic staging can differ from the clinical staging in up to a third of lung cancer cases.

Surgery presents the best treatment options for early stage disease. Therefore, an appropriate patient selection is critical to arrises the best results. Defining the most advanced component in the TNM classification is very important for understanding the extent of disease. Despite major advances in the two last decades, sometimes imaging tests may fail and either under or over-stage the disease (2). In this way, VATS may be a good option as it is a minimally invasive approach, reducing injury and complications inherent to a standard thoracotomy (3).

This article reviews the role of VATS in each component of the TNM in lung cancer from the perspective of a Brazilian thoracic surgery team.

The T status defines the tumor size and its relations with other pulmonary and mediastinal structures. Images technique usually can well define the T component, but it could by specially difficult in some particular situation. Tumors invading chest wall (T3) result in higher postoperative morbidity as well as worse prognosis. Usually, the degree of invasion is well defined preoperatively through computed tomography (CT) or magnetic resonance imaging (MRI) of the thorax. However, there are situations where the signs are not so obvious. For instance, exclusive invasion of the parietal pleura is revealed, sometimes, only in the intraoperative period, since its radiological findings are frequently tenuous. In this situation, VATS reveals the need for an extrapleural resection and also assists in obtaining adequate surgical margins. When there is a gross invasion of the chest wall, VATS may be helpful by guiding the approach and defining the limits of a complete en bloc removal.

Mostly tumors classified as T4 are not eligible for surgical treatment because they affect vital structures such as the heart, large vessels, and trachea. Despite this, there is a subgroup of patients who benefits from resection. This should always be a multidisciplinary decision. The improvement of surgical techniques and equipments have made VATS technique feasible and safe in selected cases of T4 tumors in experienced hands. VATS may also anticipate the need to convert into open surgery cases with complex anatomy due to tumor invasion. Finally, it can also interrupt the progress of the planned procedure avoiding futile measures.

Patients with a suspicious ipsilateral lesion in a different lobe can also be classified as T4 according to individualization of the case. VATS wedge resection of the accessible lesion can provide diagnosis and consequently guide the need for further adequate resection.

Lymph node involvement is the major determinant of prognosis and treatment in non-small cell lung cancer (NSCLC). Thus, proper evaluation of the N status is critical.

After initial investigation, some individuals can be submitted to surgical treatment promptly. On the other hand, patients with suspected N1 nodes, central tumors and peripheral tumors larger than 3 cm need invasive mediastinal staging even in the setting of normal CT or PET-CT. Combined endobronchial ultrasound (EBUS)-endoscopic ultrasound (EUS), mediastinoscopy and VATS are the most common procedures for this purpose (4-6).

EBUS-EUS is currently the gold standard for nodal staging when performed by an experienced operator. However, this is not yet a widely available method.

VATS exposes the entire pleural cavity, enabling almost all ipsilateral nodal stations to be analyzed. This way N2 lymph nodes are easily reached. However, N3 (contralateral) lymph nodes are not anatomically accessible. This is a major limitation of VATS.

In this context, mediastinoscopy persists as the most widespread technique nowadays, since it allows access to the N2 and N3 lymph nodes.

Despite the above, VATS plays an important role in mediastinal staging in the following situations:

There is much discussion about sublobar resections. Saving parenchyma is of paramount importance in patients with limited pulmonary function. However, this can not be detrimental to the criteria of adequate oncological resection. The two main ongoing clinical trials on the subject (CALGB140503 and JCOG0802/WJOG4607) use N0 as an eligibility criteria. Lesions with N1 involvement are classified as locally advanced disease (7). Thus, it would be appropriate to guarantee the absence of N1 involvement before indicating a sublobar resection to preserve pulmonary parenchyma.

Hostile mediastinum may be called any situation in which mediastinoscopy is difficult to perform. For instance, in the case of a previous mediastinoscopy, tracheoplasty or anatomical cervical defect. VATS is an alternative access to be considered.

Tumors located on the left side, mainly in the upper lobe, can metastasize to stations 5 and 6 (aortopulmonary zone) (8). EBUS-EUS can reach these lymph nodes, but this is an advanced technique with good performance only in experienced centers. VATS approach enables easy and secure access to these stations.

Individuals with pleural or pericardial implants are classified as stage IVA. Therefore, these patients are not eligible for surgical resections. Instead, they will receive systemic therapy generally with palliative intent. Thus, careful inspection of pleural cavity is of paramount importance during VATS.

Daily, thoracic surgeons manage pleural effusions with a high risk of malignancy. In this scenario, VATS is either diagnostic, providing adequate tissue for analysis, and therapeutic, enabling pleurodesis or partial pericardiectomy for symptoms relief.

Sometimes pleural spread is an unexpected intraoperative finding. In this case, the planned procedure is altered avoiding a futile pulmonary resection or even a futile thoracotomy.

Patients with lung cancer may have more than one lesion at the presentation or develop a new one over time. In cases where there is a contralateral lesion, the approach through VATS may aid in the differentiation between metastasis or primary lung cancer, which will result in different treatments.

We routinely initiate any curative resection by VATS, regardless of whether the planned surgical approach is minimally invasive or open.

Our preferred access is two-port technique. The camera port (10 mm) is placed at 8th intercostal space in the anterior axillary line. The second port (5 mm) is inserted in the planned line of utility incision or thoracotomy. In this way we can inspect the parietal pleural. Full incision is done only if no implants are found.

Through a 5 cm long incision, usually at 5th intercostal space in the axillary line, it is possible to mobilize lung posteriorly and evaluate hilar anatomy. According the hilum involvement, the need for a thoracotomy can be anticipated or the planned procedure discontinued.

Patients supposedly with early disease, after careful inspection of pleura and hilum we proceed with systematic lymph node sampling. On the right side lesions, stations 2R, 4R, 7 and 10R are sampled and, on the left, 5, 6, 7, and 10L (9). These lymph nodes are submitted to frozen section (10). If the analysis is negative we complete the proposed lung resection. However, in the case of lymph node involvement a mediastinal lymph node dissection is indicated.

Some of our cases

Centrally located lung lesion in a 77-year-old woman (Figure 4). Bronchoscopy made the diagnosis of adenocarcinoma and revealed a safe surgical margin for a left lower lobectomy. However, it was not possible through the CT to rule out involvement of great vessels or even left atrium. VATS has excluded extensive hilar involvement, but demonstrated that the lesion was resectable only by intrapericardial pneumonectomy (T3N0M0-IIB). At this point, we decided convert to conventional open surgery (Figure 5). 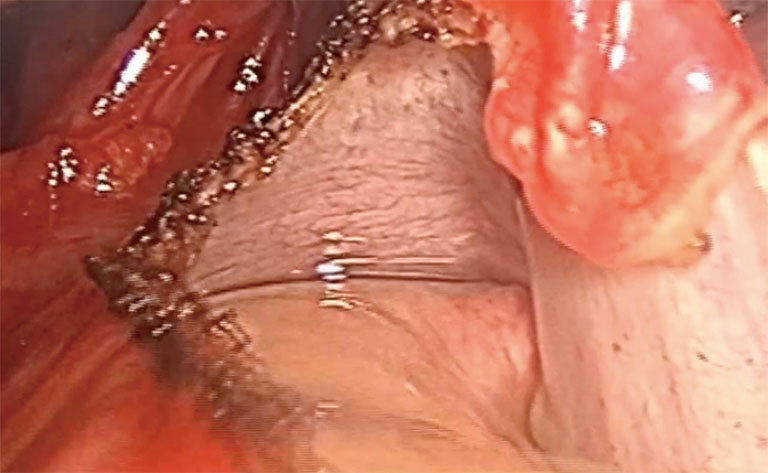 Metachronous left upper lobe lung lesion in a 59-year-old woman with previous right lower lobectomy to treat a lung adenocarcinoma 3 years before (T3N2M0-IIIB) (Figure 7). PET-CT has not demonstrated any other hypermetabolic process besides the lung lesion. Patient had already undergone mediastinoscopy in the time of first malignancy. Therefore, the resection started by systematic lymph node sampling with intraoperative frozen section. The negative result allowed us to proceed with VATS lingulectomy. The final diagnosis was a new primary lung adenocarcinoma (T1cN0M0-IA3) (Figure 8). 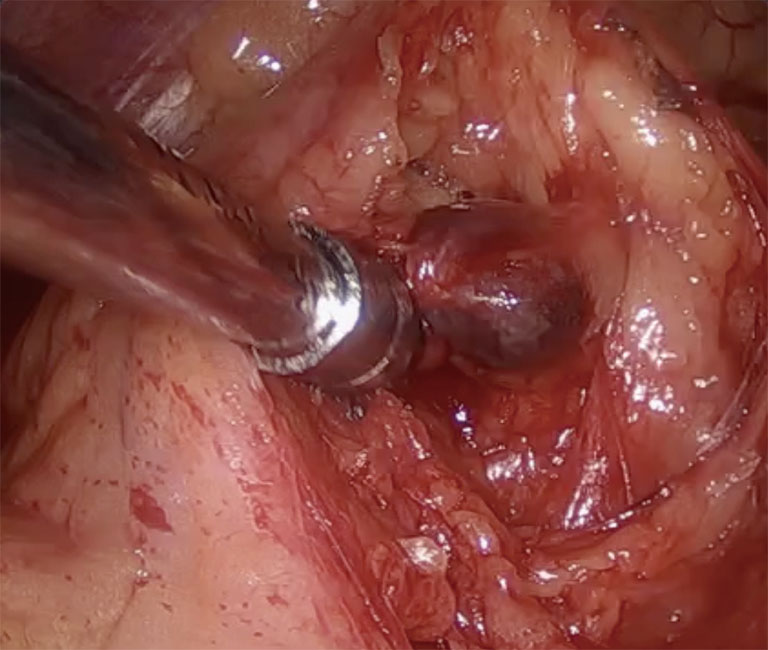 Patient with right upper lobe nodule highly suggestive of neoplasia, but without diagnosis at the time of surgery (Figure 9). Intraoperative inspection of the parietal pleura showed a small and unexpected lesion. Frozen section excluded malignant pleural implant. Systematic lymph node sampling with frozen section and consequently lobar resection were completed. The nodule was an adenocarcinoma (T1bN0M0-IA2).

VATS has been prominent in the treatment of lung cancer through the evolution of the lobectomy technique. Nevertheless, it can be a very useful approach to staging.

VATS can be a useful approach in each one of the TNM components. This is particularly true in mediastinal lymph nodes evaluation, especially in centers where EBUS-EUS is not easily available, as is the case in Brazil.