Linear stapler closure of the pharynx in laryngectomy: our experience (endoscopic closed technique)

Today, total laryngectomy is still an intervention in the treatment of advanced laryngeal lesions.

The surgical technique of laryngectomy provided: skin incision, there are several approach according to the surgical needs and the technique of surgical team; larynx’s sculpt; preparation of the thyroid gland may have already been performed previously during the tracheotomy; section of the musculature constrictor of the pharynx from its thyroid insertions; detachment of the mucosa of the piriform sinuses of the internal surface of the thyroid cartilage; lacing and section of vascular and nervous pedicles.

Finally, laryngectomy can be performed with preservation of the hyoid bone with dissection of the Hyothyroepiglottic loggia until the mucosa of the valleculas is visible and subsequently removed, or with its removal. Traditionally pharyngotomy and subsequent pharyngoplasty are done manually, this operative time is extremely important to reduce postoperative complications. In laryngectomy with removal of the hyoid bone, pharyngotomy is made between the epiglottis and the base of the tongue, at the level of the vallecula. The epiglottis is taken with the Allis and extroflexed by the pharyngotomy opening; it’s usually made hypopharyngotomy when the dissection is made from inferior margin to the superior margin and is enlarged with a pair of forceps to extroflect the arytenoid region. The larynx section starts from the less compromised side by the tumor starting. The epiglottis is displaced with the pivot of the hypopharyngotomy.

The suture of the hypo-pharyngo-esophageal breach is performed with horizontal suture. The suture is performed with a T-technique in case of extensive loss of tissue. The first layer is made with introflexed points, taking care that the margins are inside the viscus, and with continuous suture. Then, it’s evaluate the strength of the suture through the use of a probe, the weak areas are reinforced with detached points. The late complications are salivary fistulas (between hypopharynx and stomal region), approximately 5–10% of all total laryngectomies. The incidence is due to the demolition of the hypopharynx and to the general preoperative conditions of the patient and to any previous radiating therapies (1).

Treatment is medical with local medications and antibiotic therapy, if the medical approach fails it’s possible to make a surgical revision of hypopharyngeal plastics.

Total parenteral nutrition for 48 hours, then through a high-calorie diet with nose gastric tube (NGS), on the tenth day the swallowing test is performed and if no complications are detected, the physiological oral nutrition starts.

The total laryngectomy with mechanical stapler concerns the rapid closure of the pharynx without contamination of the operative field, controlling the surgical margins, with reduction of the complications like salivary fistulae, difficulty in swallowing and local recurrences (2).

In 1950s, the Russians pioneered the use of mechanical staplers for abdominal and thoracic surgery. The use for closing the pharynx was described in 1969, during the resection of the diverticulum of Zenker. However, it’s used in total laryngectomy in 1971. The staples are made of titanium, are not ferromagnetic and therefore are compatible with the magnetic resonance (3).

Devices create a double-layer closure with offset staples, leaving no gap between the clips along the repair margin. In patients who had irradiation or who have thicker tissues at the base of the tongue, longer staples may be more suitable for an effective closure (4).

The advantages of using mechanical staplers are:

Local contraindications are tumor size and local invasion that do not allow adequate pharyngeal suturing, the risk of local recurrence or difficulties to hemostasis. The surgical techniques for this variant are different. The operation proceeds in the traditional way up to the laryngeal sculpt.

The exeresis and the pharynx anastomosis could be performed according to the different techniques. The methods with mechanical stapler described are: open, semi-closed and closed (the most recent) stapling mechanism (6). The difference consists in the presence or absence of pharyngotomy to grasp the free edge of epiglottis that must be removed with the larynx. This makes the difference between radical eradication of cancer or not. In the closed procedure, after an endoscopic control of the lesion margins, the surgeon inserts a hook through the tracheal lumen into the larynx and grabs the epiglottis, thus a depression appears in the vallecular area indicating an effective retraction of the epiglottis (2).

Over the years the technique, initially totally closed, become “semi-closed” to avoid the incarceration of the apex of the epiglottis between the jaws of the stapler.

After the epiglottis extraction are inverted ventrally and fixed with a point at the thyro-hyoid-epiglottic space, through a “mini-pharyngotomy” at the level of the glosso-epiglottic valleculae, the stapler is inserted below the larynx once it has been freed from all its muscular and vascular-nervous connections. Then the jaws of the stapler are closed while the edges of the mini-pharyngotomy are held up above the jaws themselves: is a technique proposed by the ENT Clinic and Cervicofacial Surgery of the University of Perugia, Hospital of Terni, Italy (7).

This study takes a comparative evaluation between total laryngectomy technique with suture of the pharyngotomy with mechanical stapler (GIA) using closed technique adopted by our otolaryngology’s service of University Hospital of Messina, compared to conventional manual suture with needle and absorbable gut, according to the classic technique in patients with advanced laryngeal carcinoma (T3-T4, N0-3, M0-1).

It was not required ethics approval by ethics committee cause GIA methods with closed technique is performed according to clinical guidelines, our variant just use video guide to capture epiglottis during the procedures.

We selected two groups of randomized patients between March 2003 and February 2014: the first treated with total laryngectomy with mechanical suture (n=16), the second group treated with traditional surgery (n=27).

Before proceeding with the surgery, we take a biopsy in microlaryngoscopy for extemporaneous evaluation.

Then our technique of total laryngectomy with mechanical stapler with closed technique provides the same surgical procedure of the traditional total laryngectomy just to sculpt the larynx and the hyoid bone, a careful detachment of the hypopharyngeal mucosa until the pyriform sinus.

The intervention proposed by our surgical experience provides a closed technique with the variant introduced to avoid the incarceration of the epiglottis. The surgical technique involves incision of the skin on the median region of the neck about 1 cm from the jugulum and the dissection of the subcutaneous tissues. Once the prelaryngeal muscles are identified, anatomical dissection is carried out along until the thyroid capsule is identified. Subsequently we make the tracheostomy.

Subsequently proceed with the preparation of the sternocleidomastoid muscle, the isolation and ligation of the external jugular vein; the removal in blockage of the vascular nervous pack with possible resection of the adenopathies of the cervical fascia. The laryngeal vascular peduncles are ligated, the hyoid bone is isolated and then we make mobilization and exeresis of the larynx.

The GIA mechanical stapler with open arms is inserted under the larynx after it has been separated from the trachea, the esophagus, the muscular and neuro-vascular connections. Then we section the horns of the hyoid and of the thyroid to have the necessary space to close the stapler jaws and to reduce the risk of continuous suture solutions.

Our technique proposes a variant introduced in order to avoid the incarceration of the epiglottis (Figure 1). This variant involves the use of a 2.7-mm endoscope with a 0° optic that is introduced by the lower opening of the larynx with a curved Kelly pincer and through the subglottic region (passing through the neoformation) reaching the free margin of the epiglottis, which is attracted below. Then the larynx and the epiglottis are pulled up, vertically to the surgical plane, then the jaws of the stapler are positioned and are closed under endoscopic control (9). 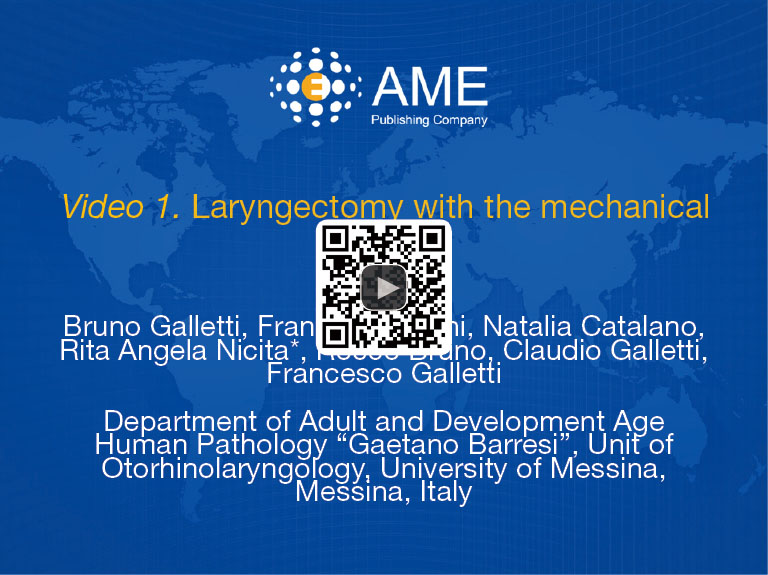 Finally, the Redon drainage in suction, the nasogastric tube is positioned and the tracheostomy is packaged, suture of the overlying layers and application of compressive dressing.

Our study was conducted on 43 patients between 42 to 92 years old, 36 male subjects and 6 female patients.

Comparing laryngectomy with or without linear stapler, this study demonstrates the advantages of the technical variant introduced by our service in the execution of the total laryngectomy with mechanical stapler, comparing it with the traditional technique.

Mechanical suturing devices are in the last decades largely used in surgical practice. This method is preferred to traditional suture, as the staplers usually offer a double row of staggered metal sutures that minimizes damage to the affected tissues and allow a watertight closure of the surgical breach, a reduction of operating times as they cut and sew at the same time and guarantee a faster and better healing.

The techniques of simple or enlarged total laryngectomy with the use of mechanical stapler (GIA) are divided into open, semi-closed and closed stapling techniques.

In the open technique the edges of the mucosa are aligned vertically and then sutured with the stapler. The advantages of the open technique are however limited compared to the closed technique, really, it’s true that we can control the edge of the tumor, however it isn’t the better method for closing too.

The indications for the closed techniques are, according to the literature, extensible to all patients with T3 and T4 glottic tumor, according to TNM classification. For these patients, accurate preoperative evaluation is required to select patients with a low local recurrence rate. One of the parameters of choice of this is obviously the surgeon’s competence in the use of the stapler. The main drawback of almost all the variants of use of mechanical stapler with closed technique is: the difficulty of visualizing the margins during the resection. The closed technique introduced by our service of Otorhinolaryngology of Messina, integrating the endoscopic technique during the suture processing with the aid of a linear stapler, allows to overcome this limit, making easier to use this technique.

Comparing the technique of total or widened simple laryngectomy with the mechanical stapler (GIA), an effective statistical reduction of the:

In conclusion, the technique with mechanical stapler is rather simple to perform. Comparing the closed technique used in our service with the surgical variants proposed by the other hospitals, the Messina method allows a greater saving of the anatomical structures and to avoid the incarceration of the epiglottis, thanks to the concomitant application during the mechanical suture laryngoscope, ultimately reducing the rate of especially late complications.

Ethical Statement: This study was approved by the Ethical Committee of Azienda Ospedaliera Universitaria Policlinico “G. Martino”-Messina (No. 16/2003) and written informed consent was obtained from all patients.