Bronchial sleeve resection avoids the morbidity of a pneumonectomy. Although, traditionally considered a contraindication to thoracoscopic surgery, a growing number of authors have now reported on the feasibility of video-assisted thoracoscopic surgery (VATS) in sleeve resections (1-3). A minimally invasive approach for complex thoracic procedures offers many benefits over traditional thoracotomy, including less pain and quicker recovery without compromising oncologic results. Unfortunately, because of the concern about performing an oncologic resection and technical challenges with minimally invasive approaches, this technique has been slow to adopt.

The patient is a 68-year-old female with a 50 pack-year history of smoking who was diagnosed with an adenoid cystic carcinoma of the left parotid and subsequently underwent left parotidectomy and neck dissection. During workup for the parotid lesion, a chest CT was significant for a right bronchus intermedius lesion just distal to the upper lobe takeoff (Figure 1A,B). She underwent endobronchial incomplete resection with the pathology being suggestive of adenocarcinoma, however cautery artifact precluded a final diagnosis. She was subsequently referred to our office for surgical evaluation. Pulmonary function testing was significant for FEV1 93% and DLCO 82%. After careful review of her imaging studies, including a negative PET prior to resection, and the characteristic morphology of the lesion, we believed the pathology was not malignant. We therefore recommended a robotic sleeve resection of the bronchus intermedius with primary reconstruction if the diagnosis proved to be benign.

After intubation with a double-lumen endotracheal tube, the patient was placed in the left lateral decubitus position. The pleural space was entered over the top of the 8th rib anterior to the mid-axillary line using a 5 mm port. CO2 insufflation of the right chest was utilized. A 5 mm VATS camera was used to ensure entry into the pleural space. A four-port technique was used with the da Vinci Xi robotic system (Intuitive Surgical, Sunnyvale, CA, USA). A thoracic grasper was used in arm 1, a hook cautery in arm 2, a 30-degree camera in arm 3 and the Maryland forceps in arm 4 (Figure 2). 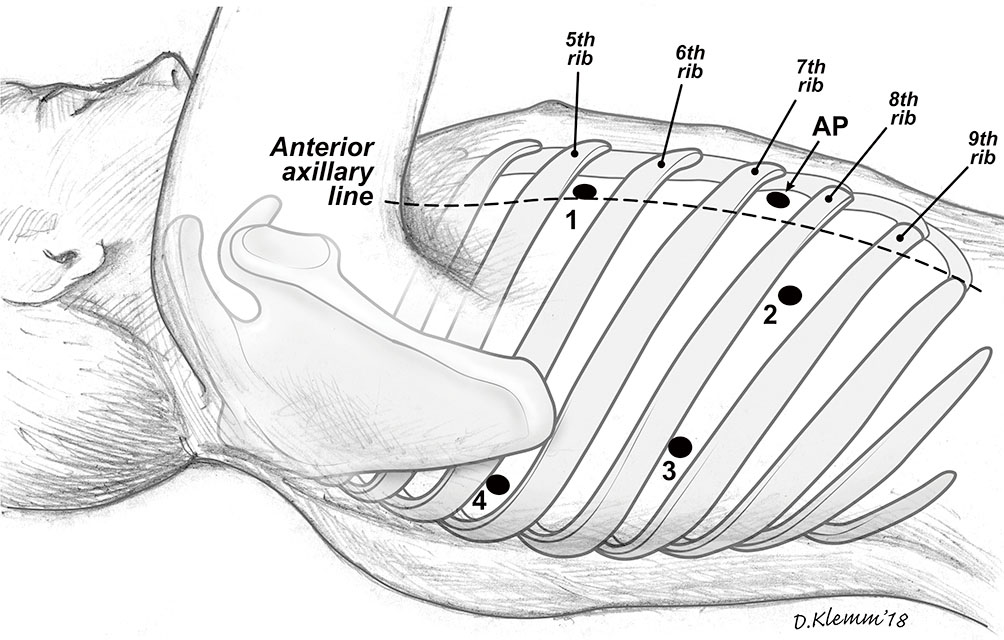 We began our dissection of the airway after confirming the absence of metastatic disease along the pleural surface. We first began by reflecting the lung anteriorly performing a posterior dissection of the right mainstem bronchus and bronchus intermedius. Lymph nodes at the carina between the upper lobe take-off and bronchus intermedius were resected. The lower lobe was then reflected posteriorly and we began our dissection of the fissure between the lower lobe and middle lobe identifying the inter-lobar artery. The recurrent segmental, interlobar, superior segmental and basilar segmental arteries were identified. Lymph nodes at the takeoff of these vessels were dissected. Our dissection continued over the superior aspect of the interlobar artery to communicate with our posterior bronchial dissection and a stapler was used to complete the fissure between the superior segment and the upper lobe. This allowed us continued dissection of the posterior wall of the pulmonary artery, separating it from the airway and circumferentially dissecting the airway. Subsequently, we were able to separate the proximal right mainstem and bronchus intermedius from the artery.

The bronchus intermedius was then divided at the takeoff of the upper lobe and at the takeoff of the superior segmental bronchus (Figure 3A). The segment of airway was sent for a frozen section and margins. Once negative margins and the absence of carcinoma was confirmed, we performed an end-to-end anastomosis (Figure 3B,C). During the anastomosis, a suction catheter was placed through the tracheal lumen of the double lumen tube to the level of the anastomosis to improve visualization. When the anastomosis was complete, stay sutures were placed on either side of the airway to relieve tension. We do not routinely buttress the anastomosis. The CO2 insufflation was then turned off, the chest was irrigated, and the right lung re-expanded to check for an air leak. The inferior pulmonary ligament was divided to facilitate mobilization of the lower lobe.

At the completion of the procedure, intercostal blocks were placed from the level of T3 to T10 with Exparel (Pacira Pharmaceuticals, Parsippany, NJ, USA). Two chest tubes were placed. An intraoperative bronchoscopy was performed to inspect the anastomosis and evacuate secretions. The patient was subsequently extubated and transferred to the recovery unit.

The steep learning curve associated with performing a sleeve resection and bronchial anastomosis with a minimally invasive approach has precluded the adoption of this technique by most thoracic surgeons. Robotic-assisted thoracic surgery is increasingly being utilized for the performance of complex procedures as it is associated with all of the advantages of minimally invasive surgery. However, there are additional advantages over conventional thoracoscopic surgery including four degrees of freedom, superior visualization, and improved ergonomics. These factors can enhance the surgeon’s ability to perform challenging procedures such as airway anastomoses (5). The surgical principles of a minimally invasive airway sleeve resection are the same as for open surgery. It is critical that the anastomosis of the airway be performed free of tension. Some authors recommend interrupted sutures to allow better size matching, less anastomotic site ischemia and prevent the loosening and entanglement of the sutures (1). However, we have previously routinely used a running suture for our open sleeve resections (4) and adopted this for minimally invasive techniques as well. Given the technical challenges of the utilization of interrupted sutures through a small utility port, a running suture greatly simplifies the complexity of the anastomosis. In addition, one can avoid multiple sutures exiting the utility port. These can interfere with visualization and performance of the anastomosis. This is of particular importance in minimally invasive thoracic surgery, in which surgeons have a limited field of view and narrow working space (6).

Here we demonstrate the technique for a robotic parenchymal-sparing bronchus intermedius sleeve resection in a patient with a benign endobronchial lesion. The magnified view of the anastomosis with the camera during thoracoscopic reconstruction in addition to the added freedom of movement may lead to decreased operative anastomotic complications. Robotic-assisted thoracic surgery offers comparable outcomes and safety to VATS and is both feasible and useful in the management of benign pathology of the bronchus intermedius. A minimally invasive approach can thus be considered for the management of benign airway disease.

Conflicts of Interest: This case was presented as a video presentation at the Annual Meeting of the ESTS in Ljubljana, Slovenia on May 28th, 2018.

Informed Consent: Written informed consent was obtained from the patient for publication of this Case Report and any accompanying images.